Eight people were killed in Nochistlán and other parts of Oaxaca in protest-related incidents Sunday. 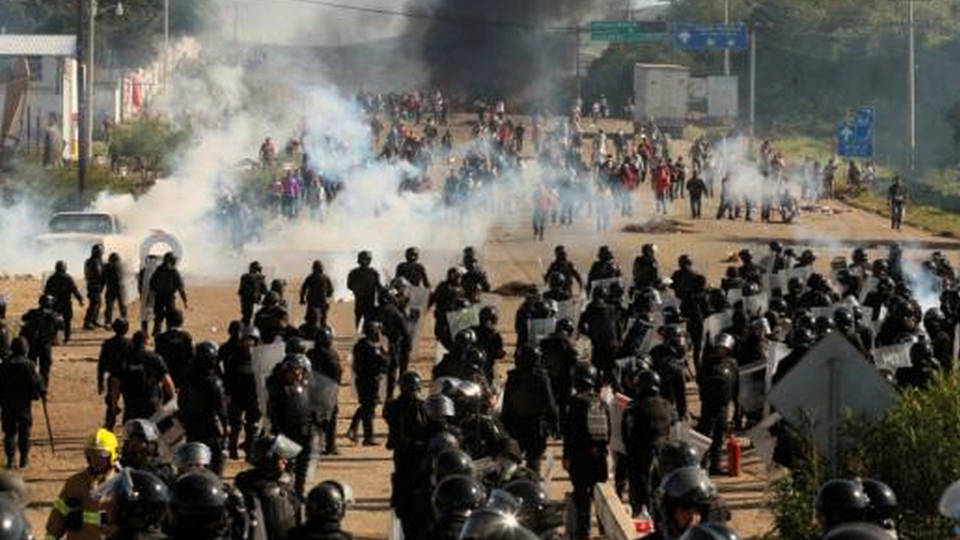 MEXICO CITY — Armed federal police attacked striking teachers in Nochistlán, Oaxaca,  Sunday, June 19, in one of the gravest of a series of similar incidents since teachers in six states went on strike a month ago, supported by teachers, families, and activists in most other states and in Mexico City.

At least nine people were killed in Nochistlán and other parts of Oaxaca in protest-related incidents Sunday, with  53 civilians and 50 police officers reported injured, and more protests and arrests occurred in Mexico City on Monday.

Upon learning of the violence in Oaxaca, teachers occupied the streets around Televisa, principal television network and promoter of the dismantling of public education and the firing of teachers.

Thirty people, mostly urban university students, were detained Monday by Mexico City police as they protested outside the national (capital city) offices of the state government of Oaxaca. They were surrounded by granaderos — riot police — who threatened to rape the women and to “disappear” all of the protesters.

The students chose to remain together so as not to be arrested or assaulted separately, and were taken to police headquarters of the delegación (borough) of Cuauhtémoc, where they were gradually being released. The abolition of the granaderos, one of the principal points of the 1968 student movement (which culminated in the massacre of hundreds on October 2 of that year), is still pending.

Incidents of federal, state, and local police, including in Mexico City, surrounding and blocking teachers who attempt to march, are an everyday occurrence. The protests have deepened since the federal government accelerated its policy of firing teachers who refuse to take standardized tests or who miss work to protest.

Mexico’s reform is a ruder version of what has been imposed in the U.S. in this century with the No Child Left Behind Act, the movie Waiting for Superman, and various other corporate and government attacks against education and critical thinking. If the “reforms” here are heavier, it’s also true that Mexican teachers fight back much harder than their U.S. counterparts (with the partial exception of those in Chicago).

The standardized tests have become the only criterion used to retain or hire teachers. The federal secretary of education admits that this is to “break the monopoly” of teacher training colleges and to bring “qualified professionals” with no teaching preparation or experience into the schools.