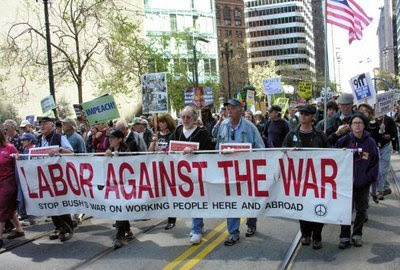 I think the peace movement and every justice movement in the United States should simply overwhelm Congress members during the next two months with one and only one demand: Pass the Employee Free Choice Act in January. This is, of course, the bill that the labor movement has been trying to pass for years, and that Democrats in Congress and President Elect Obama have committed to making law: aflcio.org/joinaunion/voiceatwork/efca.

If the Democrats pull out victories in senate races in Alaska, Minnesota, and Georgia, they will have a filibuster-proof majority in the Senate, which could be expanded by appointing some Republican senators from states with Democratic governors to plum jobs, as well as by giving Washington, D.C., representation in our federal government. Even 58 or 59 senators, rather than the magic 60, will render the filibuster excuse pretty weak. The labor movement can certainly persuade one or two Republican senators not to filibuster. So, there will be no excuses available to the Democrats. If they hear the urgent demand for the Employee Free Choice Act (EFCA) from all of us, they will be compelled to pass it.

The EFCA puts teeth behind legalizing the right to organize a union. We need it because a strengthened labor movement will almost certainly bring great benefits to workers, and because it just might bring benefits to our broader civil society. Peace groups need to push the EFCA so that labor unions owe peace groups a favor.

For all the effort the peace movement has put in, and for all the influence the antiwar message has had on pubic opinion (without which Barack Obama would not have been elected), the peace movement has almost no ability to influence Congress or the president elect. Take a look at Obama’s short list for possible appointees to the Pentagon, or his vice presidential pick, or his chief of staff: there’s nobody within a mile of the new administration who opposed the war. In stark contrast, check out the names under consideration for Secretary of Labor: they actually know and support the labor movement.

Were the labor movement to put its growing strength behind a demand for peace, the chances of success for the peace movement would increase dramatically. And, of course, lives would be saved, relations improved, and the economy benefitted. Within the labor movement there has been a great deal of peace activism, led by the tremendous work of U.S. Labor Against the War but, while many unions have formally passed resolutions opposing the war, none has put major resources into lobbying to end it.

What could the labor movement gain from cutting back spending on wars and the military? What if it were to gain thousands of new members? This could be made to happen. Just as, with Paygo, Congress required that any spending be balanced by cuts to avoid deficits, we could create a more targeted requirement. Congress could require that any public spending on the creation of green energy jobs be matched by cuts in spending on wars and the military, and require that any cuts in war and military spending be matched by new spending on green energy jobs in unionized employee-owned cooperatives — specific cooperatives set up and unionized by each national union. I’m sure there are several other ways that this could be done; the point is to make a shift of resources from killing to living happen in such a way that unions are motivated to push it forward.

While Obama proposed a relatively small scale investment in green energy jobs, at least until he deleted his agenda from his website, he did not explain how he would pay for it: changelost.com. Congressman Barney Frank pointed out a few weeks ago that , unless we want to cut every useful program, we will have to cut military spending — he proposed a cut of 25 percent. On Monday, the Boston Globe reported that “a senior Pentagon advisory group, in a series of bluntly worded briefings, is warning President-elect Barack Obama that the Defense Department’s current budget is ‘not sustainable,’ and he must scale back or eliminate some of the military’s most prized weapons programs.”

Of course, it is Congress that must do that. The role of the president in our system of government is simply to execute what the Congress legislates. But you get the idea. There is nothing radical about proposing military budget cuts. What would be radically beneficial to us all would be to create a means by which labor leaders can see the direct benefits of doing what must be done.

If you’re imagining that all of this is not needed because our new president-elect will fix everything for us, I would urge you to shake off that belief by January, or sooner if possible, and certainly by March when the occupation of Iraq will turn six and a Democratically controlled Congress will send a budget funding the continuation of the war to a Democratic president. The loudest war opponents will then be libertarians and others who favor peace but not justice. We would be wise to raise our own voices earlier and more strongly and to recruit allies into a broader movement with a coherent long-term vision of social change.

This entry was posted in RagBlog and tagged Labor, Peace Movement. Bookmark the permalink.