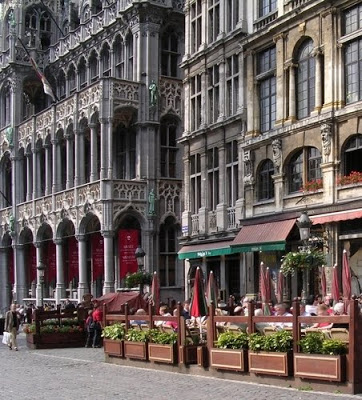 Is the old Europe history? A cafe in Brussels.
Crisis in Greece a sign of the times?
A specter is haunting Europe

BRUSSELS — The Europe of old is on its way into the history books — not with a sudden bang but with a long, slow whimper.

That’s the way it feels to me as I sit at this cafe in Belgium on a gray day in May, and after conversations and interviews with longtime friends and new acquaintances. All around me, good Belgians — Dutch speakers and French speakers — are sipping wine, drinking coffee, and conversing politely.

This is the way I remember Belgium, where I lived and taught American literature as a Fulbright professor in the 1980’s when Ronald Reagan was president, anti-Americanism was at a high point, and when I introduced students to Herman Melville, Emily Dickinson, and to American jazz, the blues, and film noir.

Of course, Belgium has changed since the 1980’s, and so has Europe. Old buildings that I knew well have had facelifts, Facebook has captured at least one generation, and the culture of the book is endangered more than ever before. That’s what I hear from students and their parents.

Moreover, all over the continent, Europeans are wondering more than they have for decades how much longer they can go on quietly sipping wine, and drinking coffee. How much longer can cafe life, which has come to define the culture of Europe, remain a reality?

My Belgian friends are wondering if the financial crisis that caught up with Greece and the Greek people and that led to violent protests in the streets of Greece can catch up with other countries. A new sense of anxiety has quietly descended on Belgium, where Flemish nationalists are on the rise as a political force. A sense of unease has also descended on England too where the long-entrenched Labor Party of Tony Blair failed to win enough votes in the popular election, and the conservatives have staged a major comeback.

In Ireland the new IRA recently set off explosions and raised the specter of more bombs. From Spain to Poland, there isn’t a country where citizens are sleepîng comfortably at night and dreaming of a wonderful future.

“Of course what happened in Greece can also happen here,” says a 40-something-year-old Belgian who works for an NGO and who has witnessed natural and human made disasters around the world. “That’s what we’re all afraid of — that the crisis that kicked off in Greece will spread and engulf us all.” His views were echoed by others.

In the mid-1980s when I last lived here, Europeans blamed many of their social, political and economic woes on the Russians, the Americans and the immigrants. The immigrants are still blamed, and immigrants are pressured to conform to traditional ways. In Belgium and France it is now illegal for Arab women to cover their faces. The burka has been decreed un-European and outlawed.

There are also new twists to the old story of the immigrants. Now, for example, Moroccans who have been in Europe for decades are pointing a finger at recent arrivals from Poland and Russia and accusing them of taking their jobs away.

Accompanying the uncertainty about jobs and the economy, there is uncertainty about national and cultural identity. Belgian politicians such as Siegfried Bracke of the New Flemish Alliance are using the crisis of identity to advance their own careers and to fan the flames of wounded ethnic and regional pride. A kind of tribalism seems to be on the rise, even as Europeans see that all things European are connected and that the crisis in Greece does not stop at the Greek borders but spreads outward.

All this matters intensely to me. My own ancestors came from Europe and it is in Europe that I sense my own roots. I have lived and worked in Europe on and off since the 1960’s, and I feel that Europe and the United States are connected. Their woes are also our woes. The way they respond to issues such as immigration and unemployment will help us or hinder us.

Right now I am writing the conclusion to this essay at a computer in a comfortable house outside of Brussels, where Vice President Joe Biden recently spoke. It is spring. There are open fields and farms. Local farmers grow strawberries which are coming into season — harvested by hand by immigrant laborers. The teenage son of my friends will play football — soccer as we call it — this afternoon and his father and I will watch from the sidelines. Their teenage daughter will be in an end-of-the-year dance performance at her school. Life goes on in the midst of the crisis. But increasingly it seems to me fewer and fewer individuals can stand on the sidelines.

There are no barricades in the streets as there were in Europe in 1968. But no matter where one lives in Europe, one is asked or invited or forced to choose sides and to make choices. My old Belgian friend who teaches at a university here is reviewing for a newspaper a new translation of Karl Marx’s classic about capitalism, Das Kapital. A few days ago in Brussels he pointed out to me the place where Marx wrote The Communist Manifesto that begins, “A specter is haunting Europe, the specter of Communism.” It is no longer Communism that is haunting Europe. But Europe is still haunted. It is a place of disquieting ghosts and it does not see that they will soon be exorcised.

[Jonah Raskin is he author of The Mythology of Imperialism and Field Days.]

2 Responses to Jonah Raskin : A Specter is Haunting Europe