Aging Berkeley radicals and young undergrads mark the anniversary of the FSM in a gathering that’s short on nostalgia, long on hope, zero on regret. 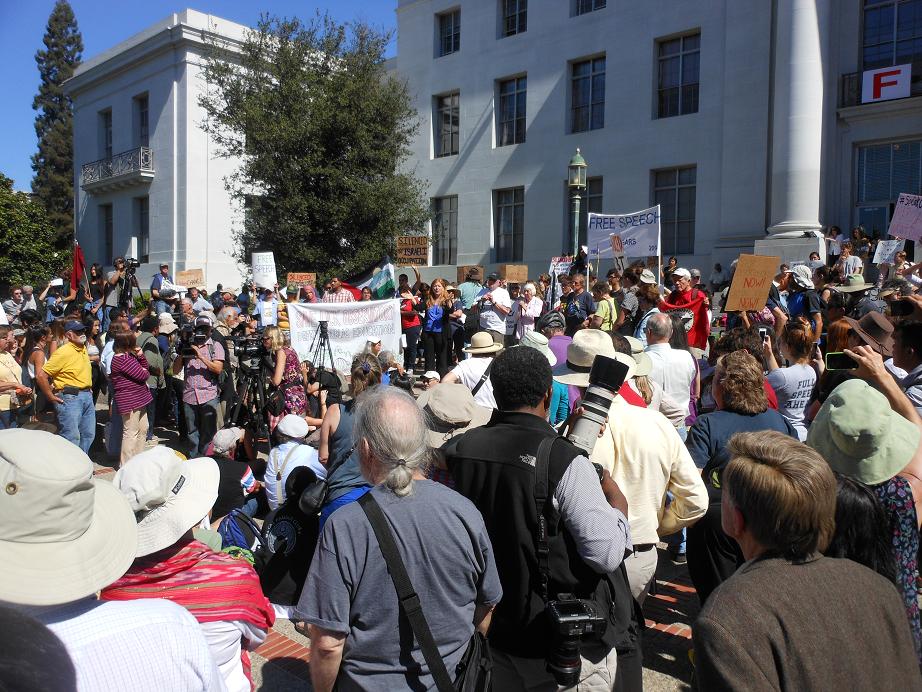 BERKELEY — Lynne Hollander Savio served as the MC for the event and played a tape of her husband, Mario, delivering his famous speech in which he invites fellow students to “put your bodies upon the gears and upon the wheels, upon the levers, upon all the apparatus, and you’ve got to make it stop!”

Mike Smith of the Oakland Seven stood behind Lynne Hollander Savio and held an American flag. Sixties radical and UC Santa Cruz professor, Bettina Aptheker, spoke, as did Dolores Huerta of the United Farm Workers (UVF), plus Jack Weinberg, who noted famously ages ago, “Don’t trust anyone over the age of 30.”

Someone in the crowd of several hundred might have pointed out that Weinberg is now well over 30. But irony and sarcasm took a back seat to idealism and optimism; no one embarrassed him or anyone else at the podium or in the crowd.

On October 1, with not a cloud in the sky and not a single policeman in sight, aging Berkeley radicals and young undergrads commemorated the 50th anniversary of the Free Speech Movement with speeches that emphasized present day causes, not nostalgia for yesterday, and that recognized the resilience of cooperative communities, not the cult of the hero, not even Savio himself who died in 1996 at 53 years of age.

The event highlighted Berkeley as a global center of student radicalism.

The event highlighted Berkeley as a global center of student radicalism and suggested that Savio was as much a product of Berkeley as he was of the Civil Rights Movement and the Catholic Church into which he was born and raised.

Edward Snowden sent a taped message from Moscow in which he called for battle against the “forces of censorship and surveillance,” and observed, “We can change the world.” Dolores Huerta, who was over the age of 30 when the 1960s began, called for free education for all, a demand that resonates on a campus where students graduate with debts that follow them for years and that have, they insist, the force of censorship. 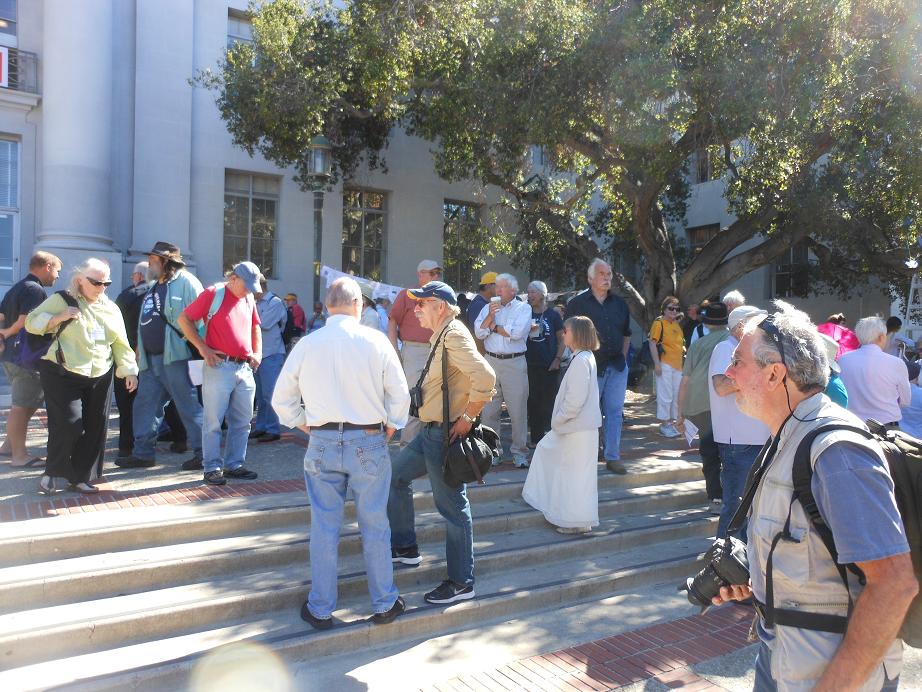 ‘When you get up in the morning… say to yourself, “I will not be cynical today.”‘

Jackie Goldberg, one of the leaders of the Free Speech Movement that reluctantly accepted leaders and a former Los Angeles councilwoman, urged the crowd, “Don’t just talk. Support each other. When you get up in the morning and look at yourself in the mirror, say to yourself, ‘I will not be cynical today.’”

Bettina Aptheker, now 70 and a former member of the American Communist Party, emphasized the necessity for “face-to-face door-to-door grass roots organizing” and suggested that campaigning by email and the Internet might not be as powerful as some might think.

Weinberg observed that the 50th anniversary of the Free Speech Movement had been “upstaged” by the students in Hong Kong, but he wasn’t complaining. They were all part, he explained, of a global movement for freedom.

Amanda Armstrong, a graduate student in the Department of Rhetoric, complained that Janet Napolitano, the former head of Homeland Security, was the head of the University of California. Student protesters on campus had won battles for decades, she insisted, beginning with the formation of ethnic studies in 1969, and a successful campaign in the 1980s that persuaded the university to divest from apartheid South Africa. Students would have to put their bodies on the gears and the wheels again and stop “the operation of the machine,” she said.

More events are scheduled over the next
two months.

More events are scheduled over the next two months. The Chancellor of the University, Nicholas Dirks, discusses free speech and social change with Egyptian satirist Bassem Youssef on the last Wednesday in October. On the second Monday in December members of the academic senate look back at the role of the faculty during the fall 1964 semester when 1,500 students, many of them inspired by Joan Baez’s singing of “We Shall Overcome,” occupied Sproul Hall and protested the administration’s rough handling of the protesters. 773 students were arrested by Berkeley police, including Savio who looks delighted in the photos that show him after his release from jail in Santa Rita, California.

With a slew of 50th anniversary events still to come on campuses over the next six years, one wonders what universities — Chicago, Michigan, Columbia, Texas, Kent — might honor Sixties protesters and whether the anniversaries will fuel new waves of protest. Or might they be co-opted by campuses like Berkeley where undergraduates can lounge at the Free Speech Movement Café while they crack their textbooks, including Robert Cohen’s hefty biography of Savio, Freedom’s Orator. It’s required reading.

[Rag Blog contributing editor Jonah Raskin, a professor emeritus at Sonoma State University, is the author of For the Hell of It: The Life and Times of Abbie Hoffman.]