JONAH RASKIN :
HISTORY | ‘Up Against the Wall’

Peter Laufer has observed and written about borders and walls all around the world. 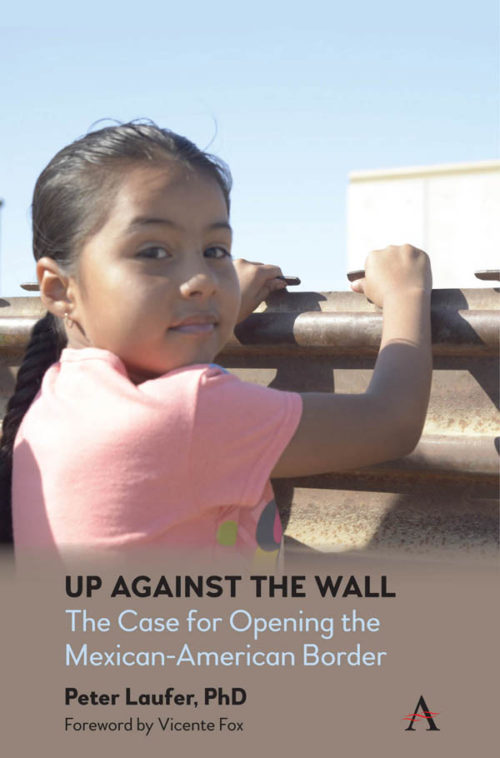 [Up Against the Wall: The Case for Opening the Mexican-American Border by Peter Laufer, PhD; Foreword by Vicente Fox (Anthem; $38)]

Build a wall and human beings will want to go under it, around it, over it, and aim to dismantle it. That’s one of the conclusions that journalist and teacher Peter Laufer has reached after a lifetime of observing what might be called “wall lives.” Another observation is this: make a law and human beings will violate it, be punished by it, and seek to reform it and abolish it.

The wall between the USA and Mexico is one of the biggest boondoggles in contemporary America, with corruption extending all the way from mega construction companies in the West to the White House, and involving Donald Trump, Stephen Bannon, and others. In August 2020, the former White House chief of staff was charged with fraud in fundraising for the border wall.

The wall between the USA and Mexico is one of the biggest boondoggles in contemporary America.

The juggernaut is shameful, criminal, and immoral. That was the unmistakable message of a recent 60 Minutes segment that showed a newly built portion of the wall already falling down because of faulty construction and the inexorable power of the Rio Grande.

Laufer’s gambit is that the border between the United States and Mexico ought to be open, or more precisely that there’s a case to be made for opening that border. “Let’s begin by opening the border to all Mexicans who wish to travel north,” he writes in the Preface to Up Against the Wall.

But nearly 300 pages later, he seems to change his tune. “Opening the border to the passage of vetted Mexicans who wish to come north is the only reasonable and long-term solution to our Mexican border,” Laufer writes. He adds, “There is no question that the U.S. southern border will be more secure if law-abiding Mexicans are allowed to pass when they so desire.”

Borders are sticky spaces and have been for as long as human beings have built them.

Borders are sticky spaces and have been for as long as human beings have built them. Few borders are as sticky today as the border between the United States of America and the United States of Mexico, though all over the world where there are civil wars, along with refugees, poverty, terrorism, drone warfare, dictators, and insurgents there are sticky borders where blood is shed and human beings die.

It seems as though Laufer doesn’t really want an open border for all Mexicans to cross, but rather a border that “vetted Mexicans” can cross. Who is to do the vetting and what criteria will be used?

Many Mexicans come to the U.S., not because they “desire” to come, but because they must come if they are to escape hunger and evade armed thugs paid to kill them. It’s all about survival. Migrants must come for work, food, and their own safety, though they take terrible risks, first by getting to the border that divides the two countries, second by crossing the border itself, and third by living in the U.S. without legal papers. They aren’t “aliens.” They’re undocumented.

Laufer has observed and written about borders and walls all around the world. One might say that he’s been obsessed with walls and borders. Of the nearly two dozen books that he has written, some of them with his wife, Sheila Laufer, at least half of them are about borders and walls, smugglers and smuggling, refugees and exiles, including Iron Curtain Rising, Exodus to Berlin, Nightmare Abroad, Forbidden Creatures, and See You Later, Amigo!

‘The Internet virtually destroys the remnants of borders,’ the author writes.

In his new book, Laufer is strong on the politics and the economics of walls and borders, less strong on the psychology of walls and borders, too eager to lump them all together, and too quick to see the end of walls and borders. “The Internet virtually destroys the remnants of borders,” the author writes. Not so fast, amigo. He also writes that, “There are no real national borders any more.” What about the borders between Pakistan and India and Venezuela and Colombia? Hasn’t the Internet created new borders with fire walls? Aren’t nation states like Russia and China still powerful in the age of Google, Amazon, TikTok, Alibaba, and dozens of multinational corporations that use walls and frontiers to augment profits and for control of labor, capital, and consumers.

Up Against the Wall offers entertaining stories, many of them sweet, about the author’s experiences around the world, along with his meetings with experts on the subject of walls, including the historian, John Ross, and the journalist, Ruben Navarrette. There are also compelling interviews with men and women who have managed to transcend walls.

Laufer gets in some good jabs at men in high places, including Obama who was known as “the Deporter-in-chief,” and Bill Clinton who showed his ignorance of history when he said, “Americans have never fought for empire, for territory or dominance.”

Borders and walls are essential to create empires, acquire territories, and dominate the colonized.

Tell that to American Indians and Mexican Americans who live in Arizona, New Mexico, and Texas. Borders and walls are essential to create empires, acquire territories, and dominate the colonized with guns, bullets, bayonets, and all kinds of cultural weapons.

There’s also a telling quotation from former Senator John McCain who noted that we Americans weaken the nation’s “greatness… when we hide behind walls.” Apparently, an awful lot of Americans are in hiding, perhaps from themselves as much as anyone else.

I would have wanted Laufer to write less about walls and borders around the world and focus much more on the contemporary relationship between the U.S. and Mexico, and between Trump and Mexico’s many millionaires and corrupt politicians.

I will say this. Laufer has balls, or cojones as some Mexicans say. Laufer visited former Mexican President Vicente Fox at his estate that sits behind a wall and persuaded him to write a foreword to this book in which he says, “Walls are for the fearful” and “The United States doesn’t keep its people behind concrete and barbed wire.”

Ah, but Señor Fox, the U.S. has more people locked up in jails and prisons, behind concrete and barbed wire, than any other nation in the world. Walls create fear, maintain fear ,and sow the seeds of fear. That’s one of the main reasons why humans build them.

Fox says that when he met the Dalai Lama they talked about the “eight billion people who own the world” and that the world “doesn’t belong to one person or to nations, but to everybody.” That’s a nice idea, Señor Fox, and not much else. Billions of people are forced behind walls and inside fences. Thousands are locked up in refugee camps. Those who dare breach walls and borders risk a bullet to the head.

1 Response to JONAH RASKIN :
HISTORY | ‘Up Against the Wall’