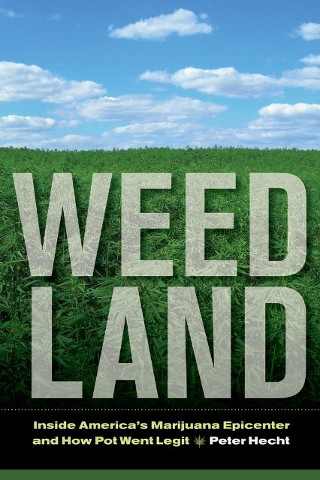 ROHNERT PARK, California — Joe Blow (not his real name) cultivated 13 marijuana plants. Sheriffs’ deputies arrived, arrested him and took him to jail. He went to court, the district attorney depicted him as an evil man and the judge sentenced him to a prison term.

That’s the gist of Peter Hecht’s new book Weed Land: Inside America’s Epicenter and How Pot Went Legit. There’s always a raid, a crackdown, and a referendum, too, to legalize or decriminalize. The Feds are always heavy, the growers usually naïve. It’s almost always bad news.

Indeed, police raids on marijuana providers continue to this very day in California, more than 18 years after the passage of Prop 215 that provided for legal medical marijuana in the Golden State. Nothing has changed and everything has changed. How to tell both sides, or all sides of the story, that’s the rub.

In the stories that he does tell, Hecht uses real names most of the time, though the subjects he writes about don’t always use their real names. There’s Dragon Fly de la Luz for example. Then there’s Norton Arbelaez, a Colorado marijuana entrepreneur who noted, “We’re waived our Fourth Amendment protections. We’ve given every piece of personal information to the state. It’s Big Brother. Let’s not kid ourselves.”

If marijuana ‘went legit,’ as Hecht claims in the subtitle to his book, the subtext is that it was co-opted…

If marijuana “went legit,” as Hecht claims in the subtitle to his book, the subtext is that it was co-opted, outlaws turned to law-abiding citizens, and the counterculture commodified. It’s enough to make a former Yippie and longtime marijuana reporter like myself sick at heart. But cooptation and commercialization are only part of the story. Hecht doesn’t go behind the scenes to describe the ordinary everyday world of weed.

So, for example, in the pages of his book we don’t hear about Joe and Jane Blow who grow marijuana and smoke marijuana. They’re recreational and medicinal users, cooking with it, giving it away, and turning it into hash. They’re not making as much money as they did a short time ago because there’s a glut on the market in Weed Land. No one ever guaranteed pot growers a steady, reliable source of money.

A reporter for The Sacramento Bee, Hecht has written about weed for a long time. Weed is his beat and after all these years he’s one of the top-notch reporters on the state of marijuana in the State of California. His experience probably accounts for the fact that he writes about weed with a chip on his shoulder the size of a giant Sequoia.

Hecht seems to feel that he owns the marijuana territory from California to Washington, Colorado, and beyond. He doesn’t mention a single other significant author on the subject as though no other author exists. But reporters and writers do exist and do deserve some recognition. There are outstanding publications as well including High Times and O’Shaughnessy’s.

The challenge for marijuana reporters has always been to get the facts right and to tell the big picture, too. Both have long been difficult to do because the world of marijuana — even in Colorado and Washington, where it’s “legit” and tightly regulated by state governments — is largely invisible, underground, and part of the black market.

Hecht doesn’t go there. He’s not a gonzo journalist in the manner of Hunter S. Thompson. He doesn’t say whether or not he uses marijuana; he doesn’t really say how he feels about weed, either. A wine writer who didn’t drink wine wouldn’t have much standing. A marijuana reporter who doesn’t smoke weed doesn’t have much standing, either.

Hecht plays the part of the tough guy reporter.

Hecht plays the part of the tough guy reporter. He tries to be objective. Unwilling to appear to be biased in favor of legalization, he’s also unwilling to come out in favor of marijuana prohibition, either. He might deem his neutrality a necessity given his attachment to the idea of objective journalism that doesn’t really exist. No reporter is objective; he or she sees the world through a particular lens that’s defined by culture, background, and language.

Fairness and accuracy do exist and they’re well worth adhering to. Hecht exaggerates. About a raid on a pot plantation near Santa Cruz, he writes, “For the California medical marijuana movement, this was its siege at Wounded Knee.” Come on! The 1973 siege at Wounded Knee lasted 71-days with guns and gunfire. The war against American Indians has been bloodied and more violent than the war against marijuana growers, dealers, and consumers. When it comes to analogies, Hecht is out of his depth.

Should you read this book? Not if you want to grow marijuana and would like cultivation tips. Not if you’ve been arrested, want to know the law and need a lawyer, and not if you cook with marijuana and want a new recipe of two. Then, too, not if you think there’s a prison-industrial-complex that benefits from the prohibition of marijuana.

“Cops were wasting millions of dollars busting and jailing pot smokers,” Hecht writes. Not really. They weren’t wasting but investing. They were helping to perpetuate the prison-industrial complex; they were providing jobs for themselves, judges, probation officers, prison guards, and contractors. By arresting and jailing young men of color, they were helping to maintain racism and racist institutions.

My own suggestions for Hecht and wannabe marijuana reporters are theses:

[Jonah Raskin,  a contributing editor to The Rag Blog, is a professor emeritus at Sonoma State University and the author of Marijuanaland: Dispatches from an American War.]