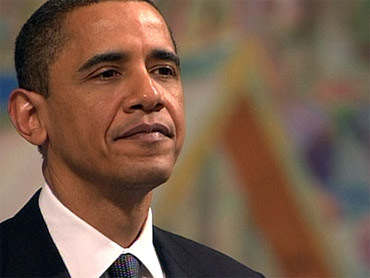 Barack Obama in Oslo. Photo from CBS.
An open letter to President Obama:
Your speech was a betrayal of American ideals

I read your Nobel Peace Prize Acceptance Speech and found it woefully ignorant. Or perhaps it was deliberately meant to mislead. If so it would belong in the same camp as all the war markers who have inhabited the White House.

If you were to read your history — say as written by Howard Zinn — you would see that the United States was born in wartime and evolved in war and that it has been the nation that has bombed more countries in the 20th and 21st centuries than any other nation in the world. The United States is a country that is defined by its bombings, from Hiroshima and Nagasaki to the bombings of Hanoi and Haiphong, to the bombings of civilians in Afghanistan and Iraq.

You say that, “In light of the Cultural Revolution’s horrors, Nixon’s meeting with Mao appeared inexcusable.” How could you forget or omit to say that the United States was at that moment at War in Vietnam. The United States also invaded Laos and Cambodia. Mr. Nixon was a war criminal. He violated the basic rights of Americans during the Vietnam Era, using the FBI and CIA to stifle dissent and to try to destroy the anti-war movement. Not a word did I hear in your speech about American pacifists, from Henry David Thoreau to the young men who burned their draft cards and refused to be part of an invading army in South East Asia in the 1960s and the 1970s.

You say that, “The United States of America has helped underwrite global security for more than six decades with the blood of our citizens and the strength of our arms.” This leaves out the immoral role of the United States in toppling democratically elected governments like that of Salvador Allende in Chile. It neglects to mention the role of the U.S. military in protecting U.S. economic interests in Africa and Asia. The United States had been an empire from its inception. Indians were massacred for hundreds of years; colonies acquired in the Philippines and Puerto Rico.

You talk about international law and America’s adherence to it, but the Bush administration violated international law and human rights for eight years. Not a word have you said about that. America led the world, you say, in terms of protecting human rights, preventing genocide and restricting dangerous weapons. You turn a blind eye on the fact that the United States was the first and the only nation to use nuclear weapons against another nation, that genocide took place in this country, and that the U.S. has been an arms dealer to the world.

Your speech is a betrayal of American ideals. It is a betrayal of democracy. It is an abuse of power. It is an act of deception cloaked behind pretty words and beautiful rhetoric. It cannot hide the realities of America’s belligerence the world over, or the way that the U. S. propped up dictatorial regimes on every continent for almost the entirety of the 20th century. You mention Dr. Marin Luther King, Jr. in your speech. You praise him. But you cannot hide behind him. He was a peacemaker. You are a war maker. The blood of our own soldiers and the people of Afghanistan is on your hands.