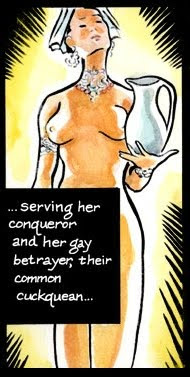 Censored image from Ulysses Seen. Graphic from Literature R Us.
Girls Lean Back:
Sex on campus,
And the ongoing appeal of pornography

Don’t the censors of sexually explicit materials get it? Well, apparently not. Not even in this day and age.

Apple has forced the authors of Ulysses “seen” — a web comic book adaptation of James Joyce’s magnificent novel, to remove images of a woman’s breasts for a version to be used with its iPad app.

Can you believe it? I thought that the issue of obscenity had been settled long ago; in the 1920’s, Joyce’s Ulysses was found to be artistic and that it could not be legally censored. But pornography is apparently an intractable problem. It just won’t go away; every time there’s a new technology it comes back.

In his big, thorough book about pornography, which he entitled Girls Lean Back Everywhere: The Law of Obscenity and the Assault on Genius, Edward De Grazia, argued, among other things, that sex was irrepressible and unstoppable. An expert on sex in literature and film, De Grazia argued some of the toughest obscenity cases of the 20th-century and won against the state again and again. The censors at Apple ought to read his book and learn a thing or two.

Every semester for the past 20 years, I’ve used his book in the law class I teach — there’s a week on pornography — and every time I teach the class I can’t help but think about his book and its apt title. I look out at the students, usually 60 or so of them, all seniors, and I notice every time that the girls and the women in the class do lean back. They also lean forward and to the side. They lean every which way, and almost every way they lean, they reveal a part or parts of their bodies — legs, necks, ankles, and breasts.

Sometimes they come to class in slips and negligees, with push-up bras or no bras, and class is a kind of striptease, though nobody disrobes completely. The men in the class lean back too; they lean forward and to the side, and they can be as sexual as the women. They’re all — these students — in their early twenties, and they drink and smoke and have sex. Big surprise!

Isn’t that what college students have been doing for eons? I think so. The students today belong to a post-60’s, post-70’s, post-80’s, post-90’s, post-first decade of the 21st century generation. They have lived with pornography all their lives, pornography on TV and the Internet, and they have come to accept pornography as a part of life, as much a part of life as driving a car, and making calls from a cell phone.

They eat and sleep and dream pornography and the idea that someone, anyone in authority, would try to stop or prevent them from having access to pornography seems ludicrous to them. Because, at this point in time, there’s no way to stop it, though the dinosaurs of the 21st century — college teachers — would like to do just that.

Faculty members, mostly male, are often made uncomfortable by the leaning back and the leaning forward of the students, mostly female, and sometimes they even tell students to dress more appropriately — whatever that means — and not to wriggle about as often or as dramatically as they do. Welcome to the new generation gap!

The faculty members — now in their 40’s and 50’s and 60’s — were once young themselves and did a lot of leaning on their own, and resented members of the older generation who tried to police their bodies. Now, the shoe, the slip, or the negligee is on another body, a younger body, a beautiful body, and the professors don’t like it. They have turned prudish. They’d like the students to cover up.

Now, I can imagine that someone might ask, well, do you teach at a university connected to a church? No, I do not. I teach at one of the 25 campuses in the statewide California State University (CSU) system. This is California, and in California when the sun shines, students take off their clothes, as many different layers and items as they can take off, and not be arrested for indecency. They walk around campus as though they’re in the Garden of Eden — without shame, and without guilt.

Now, the faculty thinks — this is what faculty members have actually said to me — that the students have sex on their minds all the time, and that it’s the job of the teacher to encourage the student not to think about sex. And — so the argument goes — that can best be accomplished if the teacher doesn’t talk about sex or even mention the word “sex.”

Not long ago, a group of faculty members came to my office to request that I remove a photo I had on my wall of Marilyn Monroe. In the photo, Marilyn holds two roses against her breasts so that one can’t see her breasts at all. That photo, I was told, would encourage students to think about sex; it would validate their own thoughts and it would encourage them to go with their sexual daydreams. I was a role model, whether I wanted to be or not, I was told, and I had an obligation to take down the photo.

If I didn’t… well… there was a committee on issues of sexual harassment. So, I took down the photo and brought it home. Marilyn is on the wall in my dining room now. I didn’t want to fight that battle at that time.

One of the things I’ve learned, not surprisingly, is that students have continued to think and talk about sex; the removal of that photo of Marilyn had no influence on them whatsoever because they swim in a media sea of sexuality. Sex is all around them, and inside, too, and faculty members on my campus have the ludicrous notion that the best way to deal with the situation is just to ignore it — not to talk about it. Bury their heads in the sand.

At a meeting recently to talk about a book that will be assigned reading for entering freshman next semester, the issue of sex came up again. The title of the book is Middlesex, by Jeffrey Eugenides, Pulitzer Prize winner. Now, I suggested that someone deliver a lecture to the students about sex — because, well, “sex” is in the very title of the book. The faculty members were shocked that someone would even suggest the idea, and it was swept under the table.

It’s a sad day for academia. A sad comment on a generation that once believed in sexual freedom, sexual liberation and that resented their elders telling them to resist the temptations of sex. I do think that sex ought to be discussed — and not just in the sex education class that they are required to take in which they learn about sexualy transmitted diseases and HIV and AIDS.

I think it might be healthy if the students were to read pornographic books and watch pornographic movies, and talk about them openly. If we did that, it might help to break the unhealthy cycle of Puritanism that comes back again and again no matter how many generations rebel against it — for a time.

At the end of the meeting to discuss Middlesex one faculty member suggested that students would be made uncomfortable if there was an open discussion about sex and sexuality. “Our students don’t think of us as sexual beings,” he said. And without missing a beat, I said, “Speak for yourself, sir.” I hope that my students think of me as a sexual being, much as I think of them as sexual beings because I am and they are sexual, and sex won’t go away and especially if we pretend it’s not there.

So, damn the censors. The girls will lean back and the boys will lean back; it’s part of the mating game, part of being human, and at the age of 19, 20, and 21 leaning back is going to happen no matter what. Maybe some of the teachers should lean back too.

Celibacy isn’t for this generation. Sex is. And that’s on the whole a good thing. I’m happy to say that sex is still with us. I even think it’s here to stay. Case in point: a woman student came to my office on the last day of the semester to tell me that she attended what she called a “private swingers club in San Francisco,” and that if she had not attended she “never would have learned as much as I know about myself today!”

Students are going to “sex clubs.” On their own, because they are one of the few places where they can learn about sex. It might make sense, it might help them, if more of them could and would talk openly on campuses about their own sexual experiences. Sex ought to be far more openly discussed on campuses than it is today.

We have to believe and to recognize too that talking about sex is not the same thing as having sex. In the landmark Ulysses case from the 1930s, Justice John Woolsey ruled that people would read Joyce’s book, have a vicarious experience, and not want to actually go out and have sex. That idea was revolutionary in the 1930s; I guess it’s still revolutionary today.

[Jonah Raskin was a member of the Yippies; he teaches law at Sonoma State University.]

2 Responses to Jonah Raskin : Sex on Campus and Ulysses Un-Seen