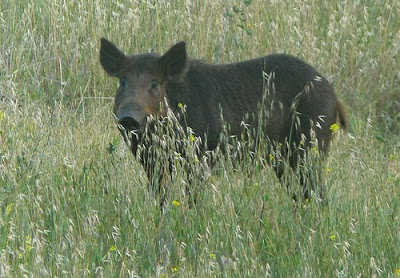 Tooch Colombo isn’t like you, me, most of our friends and family members. When he wants to eat meat he doesn’t go to Central Market, Whole Foods, or Safeway. He goes for his guns and heads for the wilds of California where his ancestors hunted for thousands of years.

He’s been hunting his whole life — including a stint as a professional hunter — and when he stops hunting, a way of life will die with him. He’s the last of the great hunters in California; most of the men with whom he hunted are dead, and the plentiful game they once hunted has long since been annihilated.

Colombo is one of a kind, a survivor of a way of life that as recently as the 1970s in California was also a way of making a decent living. Hunting in the wilds just doesn’t pay anymore, though Colombo still thrills to the excitement of the hunt.

Most men half his age have given up hunting, though they still remember week-long jaunts in the mountains where they shot deer, pigs, antelope, and bear, slept under the stars, told stories, and cooked and ate over an open fire what they had killed.

Colombo is unusual in more than just one way. He does almost everything himself, or nearly so. He’s not only a hunter, he’s also a butcher, a cook, and, of course, an eater with a ravenous appetite. “I eat everything that I kill,” he told me when I first met him at the offices of the Federated Indians of Graton Rancheria, a tribe in which he’s a leading member. He adds, “I’m the complete cycle.”

Colombo’s hair is white and his face is ruddy. He wears battered cowboy boots and well-worn jeans. He is intense and funny and very serious about hunting for wild game and about the centuries-long hunting of Indians by white men that nearly exterminated all of the Indians.

Before he goes hunting, Colombo says a prayer to the “Grandfather in the Sky,” as he calls the Great Spirit. “Let me find game,” he says. “Let me be merciful and let the animal die with one shot.” After he kills a deer or a pig he gives thanks and he means it, too.

Tooch Colombo’s ancestors lived on the coast of California for thousands of years, though he didn’t know anything about them until he was an adult. No one, not even his mother who was born a Miwok, told him that he was an Indian when he was a boy growing up not far from the Pacific Ocean, where his forefathers also fished.

“In those days it was a disgrace to be a Indian,” he told me. “You didn’t advertise the fact.”

On his father’s side, his ancestors were Italians, as the family name Colombo attests. The mixture of Indian and Italian has made for a lifetime of exciting cooking and eating and for an appreciation of the sacredness of food and of life itself.

For Colombo, the authentic life starts with hunting in the rugged terrain of California, where he’s roamed ever since the 1940s. When he was a younger man he worked 9-to-5 as a butcher for Safeway, Lucky, and other supermarkets, but he always took a month off for hunting, which meant that he always had to find another job at the end of hunting season. No one was willing to rehire a butcher who took off for a whole month to stalk, track, and hunt.

At the age of 75, he still goes out for deer in August and for pig all year long, as hunting rules allow. He loves racing up and down steep inclines, his heart pumping. He’s no lonely hunter, either. He goes into the wilds with his buddy, Euell Baker, who is 78, and with three or four dogs that are indispensable for the hunt.

“The dogs are able to track and then to stop a pig long enough for me to get close and to shoot it behind the ears,” he tells me on an afternoon when he remembers a lifetime of hunting stories that would make Ernest Hemingway or William Faulkner proud.

In the field, he skins and guts the animal he kills, and at home he cuts it up into chops and roasts. Sometimes he ages the meat; since he can’t cook and eat everything he kills all at once he freezes a lot of it and thaws it out when he needs it.

If he has both venison and pork on hand in his kitchen he mixes the two together and makes his own version of Italian sausage. He won’t tell me the whole recipe, and he insists that, “Italians will go to their grave rather than give away the secret ingredients,” but he does say that he uses “lots of wine and lots of garlic.” After all, he’s half Italian and he lives up to his roots on both sides of his family.

Occasionally, he also forages for plants that Indians, including his mother, used for cooking and for medicinal purposes.

Colombo has always been a meat eater and he always will be. Years ago, he turned his wife, who was a vegetarian, into a meat eater, too. He started with abalone that she loved and then he made a dish he calls “Pork a la Toochi” that persuaded her to eat the wild pig he hunted and killed.

Still, he doesn’t insist that meat is for everyone. “If you want to eat snow peas for the rest of your life go ahead,” he says. He’s well aware of the impact of hunting on the environment and on wild animals, and he tells me, “there are too many people looking for too few resources.”

There will always be wild pig in the West, he believes, but he has noticed that deer are becoming scarcer, even in rural areas. “My Indian grandmother remembered elk and grisly bears,” he explains. “She also said that the grass was so high after the rains that a man on horse could hardly see over it.”

For a time, he served as the chairman of the California Fish and Wild Life Advisory Board, and tried to implement rules about the protection of fish and game. “I was a voice crying in the wilderness,” he says. “I was hunting in the hills and I could see that the limits had been reached, but I couldn’t persuade others to see them, too.”

Hunting is in Colombo’s blood, and he’s as proud of his skills as a hunter as he is about his identity as an Indian. He’s also not the same hunter at 75 that he was at 13 when he killed his first deer with a rifle his father bought for him.

“Hunting has been a way of life for me,” he says. “It has put food on the table, and it still keeps me in shape. These days, I don’t kill as much as I used to. I’ve learned how precious life is, and how much we need to protect it.”

[Jonah Raskin is the author of Field Days: A Year of Farming, Eating and Drinking Wine in California.]