Jonah Raskin : Time to Burn Down the Banks? 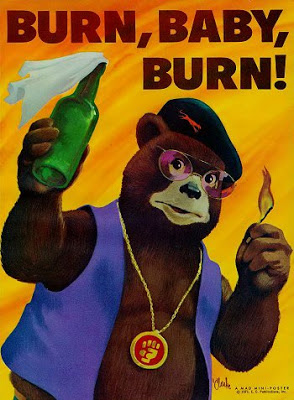 I don’t want to incite violence and I certainly don’t want bank tellers to be injured. But I’m trying to think outside the box, and trying also to think of ways to wake up the bankers themselves, and to come up with ways to express the anger that citizens feel about the robbery by the banks.

I am certainly in favor of demonstrations, and the expression of First Amendment rights outside banks. This past year, citizens all around the country have protested outside American banks including the Bank of America, a branch of which was burned down at Isla Vista in California 40 years ago in 1970. The lawyer for the Chicago Eight, Bill Kunstler, was there, and urged demonstrators to go to the bank and burn it down. “Burn Baby Burn” was as much the cry of a generation as “Tune In, Turn On, Drop out.”

There’s a history of angry citizens burning down barns, tenements, banks and more. Usually burning a building expresses frustration and desperation; nothing else works. All that there is to do is to light a match and to watch the flames spread.

Let’s remember that in the 1960s, even the staid, academic New York Review of Books published on the front page a diagram of a Molotov cocktail, as it was then called, with instructions on how to make one.

The Molotov cocktail — which my dictionary defines as “a makeshift incendiary bomb with flammable material and a wick” — has been used all around the world for at least 100 years. Maybe it’s not necessary to actually make and hurl one of them. Maybe there are other ways of getting the point across.

Abbie Hoffman was once so mad at Random House, which had published his classic, Woodstock Nation and would not publish Steal This Book, that he commissioned and distributed a cartoon showing a kid blowing up Random House. I know Random House didn’t think it was funny, nor did bookstores appreciate the title, Steal This Book, which led to shoppers doing just that — stealing Abbie’s book and not paying for it.

This is what I’d like to say about American bankers, and without recourse to matches, a wick and inflammable material: bankers are thieves; they’ve been getting away with outrageous crimes for decades, robbing from workers, and from the middle class too. They’ve grown fat and corrupt. Cries of anger, and protest might show them that we’re pissed, and that we’re not going to take it anymore. We won’t allow ourselves to go on being fleeced.

Of course, this is the summer of the new Robin Hood movie, and as every kid knows from Nottingham, England to Austin, Texas and Isla Vista, California, Robin Hood robbed from the rich and gave to the poor. Both parts of the equation are essential — robbing from the rich and giving to the poor. You can’t keep the cash for yourself. The bankers have been doing just the opposite: robbing from the poor and giving to the rich. Maybe it’s time to bring Robin Hood back to the ‘hood, put sheriffs on alert and bring some economic justice into our sorry world of billionaires.

Now, I’ll have to admit that as a Yippie, I’ve always believed in the power of guerrilla theater, such as tossing bills on the floor of the Stock Exchange on Wall Street, as well as burning money. Abbie Hoffman and Jerry Rubin did that. I wouldn’t mind a little street theater now, in front of the Bank of America, or at my own piratical financial institution, Citibank.

Not long ago, Arianna Huffington suggested that citizens withdraw money from big banks and put it into smaller — more responsible banks. That idea didn’t go over very well because a bank is a bank — big or small — and because just moving money around from one bank to another bank won’t do the trick.

Maybe we don’t have to start or finish by burning down a bank branch, but with burning five and ten dollar bills in front of a bank. It might be liberating; it might free some of us from the power of the Almighty Dollar. I know money is scarce and that men and women are out of work and can use money. In that case, give it away on the street; give away as much as you can as often as possible. Get it out of your pockets; get its power out of your head.

And of course protest outside of your bank; remind the bankers that, as Woody Guthrie said, “Some will rob you with a six-gun, some with a fountain pen.” These days, bankers are robbing most of us with computers, and maybe the computer can free up some of the money — while it’s still around — because the crisis that happened in Greece could and might very well happen here. Before you lose it all in the deepening recession, and in the next big decline on the Stock Market, you might as well play with it. After all, it’s only play money.

[Jonah Raskin was a Yippie and now teaches law at Sonoma State University.]

6 Responses to Jonah Raskin : Time to Burn Down the Banks?