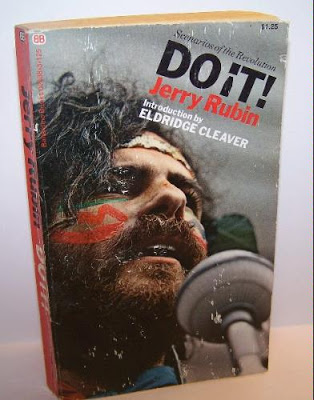 Image by rhpepsi1 / Amazon.com.
Do It! does it:
Jerry Rubin’s Yippie classic makes it to 40

Jerry Rubin, the youthful Yippie who turned into a middle aged Yuppie, didn’t coin the popular phrase, “Don’t trust anyone over the age of 30.” Jack Weinberg was the first to speak those words at Berkeley during one of the battles of the Free Speech Movement (FSM).

Rubin liked the idea and the phrase; he took it over and used it so often that folks in the counterculture thought it belonged to him. To give him credit, Rubin gave Weinberg credit in Do It!: Scenarios of the Revolution — a classic about cultural revolution in America — which was published in 1970 when he was already over the age of 30.

Rubin fudged the facts of his age, and many other facts in Do It! In fact, he didn’t tell a straight story about the creation of the book itself. On the title page, credit is given to his girlfriend at the time, Nancy Kurshan. The title page also says, “Yipped by Jim Retherford,” though Rubin never gave Retherford — who now lives in Austin and works with The Rag Blog and the New Journalism Project — the full and complete credit he rightfully deserves.

Recently, I talked to Retherford, on the phone about the genesis and evolution of Do It!, and his account was eye-opening to say the least. “I went to work for Jerry soon after I lost my job at the Peace Eye Bookstore,” he said. “I was the ghost writer for the book. That meant that I conceptualized the whole book and created a myth so that it would all hang together. I designed it so that it would look and feel like the six-o’clock news, and so it broke out of the linear mode. I was inspired by Quentin Fiore who had worked with Marshall McLuhan on The Medium is the Massage; later we brought in Fiore to be the official designer, and I worked closely with him. That was a fabulous experience, and I went on to become a graphic designer.”

Back in 1969-1970, Rubin wasn’t interested in historical accuracy, but rather in creating myths and in spinning metaphors, which made it possible for him to work with Retherford. Rubin loved to embellish and exaggerate, and so in Do It! we’re told, for example, that “Elvis Presley killed Ike Eisenhower.” “Kill your parents,” was one of Rubin’s most often shouted slogans, and if he didn’t mean it literally, that didn’t matter to him.

Still, if accurate numbers and real dates weren’t essential to Rubin, they do matter to biographers and historians, and to veterans of that era, too, who care about what happened, where it happened, and who really wrote the books. I feel a bit defensive here; I did my own share of myth-making, but it does matter when real historical change heated up in the 1960s, and when the cultural revolution began to cool down, and the society returned to at least a semblance of normalcy.

The year 1970, when Do It! was published — and became a bestseller — marked, of course, the start of the decade of the 1970s. If you calculate historical change by calendars on the wall, and precise dates then the 1960s were already over. But “the 1960s” weren’t over if you look at what was happening in the streets and in communes.

Scholars who are partial to early SDS and who dislike the Yippies and the Weathermen tend to ignore 1970, 1971, and 1972. Those years were a time of immense social and political ferment, and, lo and behold, it wasn’t the 1960s anymore on the calendar. There was rioting in the streets from coast-to-coast; resistance to the war in Vietnam, and soon afterward sabotage, in and out of the military, to the widening wars in Laos and Cambodia.

There was the growth of rural communes, the spread of marijuana, the rise of women’s liberation, and gay liberation, too. Nixon was in the White House; John Mitchell was the Attorney General. To radicals, it seemed as though America was becoming a fascist nation, which is why Rubin & Co. used the German spelling for America in Do It!, as in, “I am a child of Amerika,” and “Fuck Amerika.” Rubin was definitely angry — for intensely personal as well as overtly political reasons. As a young man, he had lost his parents and felt like an orphan and lost.

Do It! – Rubin’s autobiography (or is it a biography?) about becoming a radical — reflected the fear, paranoia, and irreverence at that particular time. Today, 40 years later, it is, if nothing else, a valuable historical document of that era when the 1960s blurred into the 1970s, and rebellion widened and intensified.

The book that broke linear rules also helped to stir up protest when it was published. In many ways, it’s old-fashioned “agit-prop,” to borrow a phrase from the radicals of the 1930s, a decade when leftists used agitation and propaganda to undermine the capitalist system.

Do It! was also what was called “agit-pop” in the 1960s. Indeed, Rubin, Retherford, and Fiore used many of the tools and much of the style of pop culture, including cartoons and graffiti lettering, and presented a cartoon-like view of America in which the good guys were easily distinguished from the bad guys.

“Subvert!!” Rubin and his assistants wrote in the next-to-the last chapter in the book. They added, “That’s the task of every young person. Spread ideas that undercut the consistent world of Amerika, and then top it off by burning her symbols — from draft cards to flags to dollar bills.” College kids and high school kids did all those things, not only or just because Jerry told them to, of course, but Jerry definitely played a part in making protest and rebellion happen, along with Abbie Hoffman, his fellow Yippie. 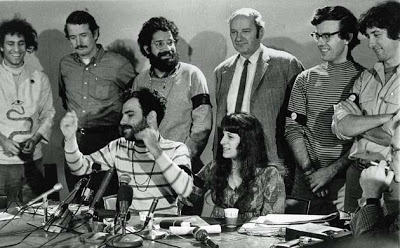 Jerry Rubin at microphone with Nancy Kurshan. Behind them are the Chicago Seven defendants (not including Bobby Seale), from the Chicago conspiracy trial. Abbie Hoffman is on the far left. Photo from AP.
Rubin and Hoffman were famous as a result of the Chicago conspiracy trial that ended in 1970 with verdicts of guilty for both of them for rioting during the 1968 Democratic National Convention in Chicago. They both had clout in the counterculture, and they were good for one another, a lesson I learned from lawyer William Kunstler, who pointed out that their sibling rivalry pushed each one of them to creative heights they would not have reached on their own. “Jerry and Abbie were a team,” Kunstler said. “They egged one another on.”

Hoffman, who was diagnosed with bipolar disorder, committed suicide in 1989; Rubin was killed while trying to cross Wilshire Boulevard in Los Angeles in 1994. He was jaywalking.

I knew Jerry and Abbie personally, though I identified far more with Abbie than Jerry. In 1970, I reviewed Do It! for Liberation New Service (LNS), and didn’t hide my dislike for it. Rubin even called LNS and complained, but LNS was also partial to Abbie and no one scolded me.

Looking back at the book now, 40 years later, I can see again why it irked me. “Marijuana makes each person God.” So reads a sentence in the chapter, “Keep pot illegal.” I had seen too many stoned college dropouts to accept the view that pot had divine properties. Do It! also proclaims, “The New Left said: I protest. The hippies said: I am.” I had been a member of Students for a Democratic Society (SDS), and a new leftist and Rubin’s style of cultural revolution was too dismissive of ideology and organization for my taste. Do It! seemed to make revolution sound inevitable and even easy.

At the very end, there’s a utopian description of the future:

“People will farm in the morning, make music in the afternoon and fuck wherever and whenever they want to. The United States of Amerika will become a tiny yippie island in a vast sea of Yippieland love.”

It was easy, of course, to laugh at and dismiss those Yippie notions, and many radicals and liberals did laugh, though in his introduction to Do It!, Eldridge Cleaver — then a Black Panther living in exile in Algeria — took Yippie ideas seriously, all-too seriously one might add. When Cleaver ran for President in 1968 on the Peace and Freedom Party, Rubin had been his running mate for Vice President.

In his introduction to Do It!, Cleaver admits that not all of Rubin’s ideas appealed to him, but that enough of them did for him to regard Rubin as a brother. “Right on,” Cleaver wrote. “All Power to the People.” It definitely was a time of slogans and gestures. 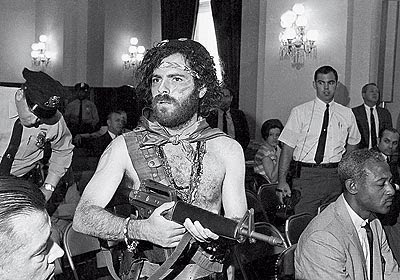 Jerry Rubin played dress-up when he appeared before the House Committee on Un-American Activities in 1967.
Rubin had a genius for slogan, gesture and costume. He showed up at hearings of the House Committee on Un-American Activities (HUAC) dressed as a soldier in the American Revolution of 1776. One of the photos in Do It!, shows him at HUAC with his lawyer Beverly Axelrod.

Rubin may have been grandiose and even a hypocrite; he may have turned his back on Yippie ideals when he went to Wall Street to make money and become a Yuppie. But he definitely had courage when he defied HUAC, and he played no small part in helping to dismantle and discredit an institution that had done a disservice to American democracy for decades.

For that role, Rubin deserves to be remembered and lauded. When many others were afraid, he was fearless. He followed his gut instincts. He just did it, and with an exclamation mark, too!