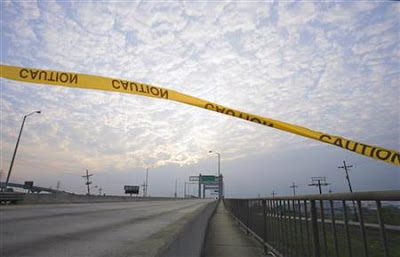 NEW ORLEANS — Opening arguments begin today in what observers have called the most important trial New Orleans has seen in a generation. It is a shocking case of police brutality that has already redefined this city’s relationship to its police department, and radically rewritten the official narrative of what happened in the chaotic days after Hurricane Katrina.

Five police officers are facing charges of shooting unarmed African-Americans in cold blood, killing two and wounding four, and then conspiring to hide evidence. Five officers who participated in the conspiracy have already pleaded guilty and agreed to testify against their fellow officers.

The shootings occurred on September 4, 2005, as two families were fleeing Katrina’s floodwaters, crossing New Orleans’ Danziger Bridge to get to dry land. Officers, who apparently heard a radio report about shootings in the area, drove up, leapt out of their vehicle, and began firing.

Ronald Madison, a mentally challenged man, was shot in the back at least five times, then reportedly stomped and kicked by an officer until he was dead. His brother Lance Madison was arrested on false charges. James Brissette, a high school student, was shot seven times, and died at the scene. Susan Bartholomew, 38, was wounded so badly her arm was shot off of her body. Jose Holmes Jr. was shot several times, then as he lay bleeding an officer stood over him and fired point blank at his stomach. Two other relatives of Bartholomew were also badly wounded.

Danziger is one of at least nine recent incidents involving the NOPD being investigated by the U.S. Justice Department, several of which happened in the days after the city was flooded. Officers have recently been convicted by federal prosecutors in two other high-profile trials.

In April, two officers were found guilty in the beating death of Raymond Robair, a handyman from the Treme neighborhood. In December, a jury convicted three officers and acquitted two in killing Henry Glover, a 31-year-old from New Orleans’ West Bank neighborhood, and burning his body. 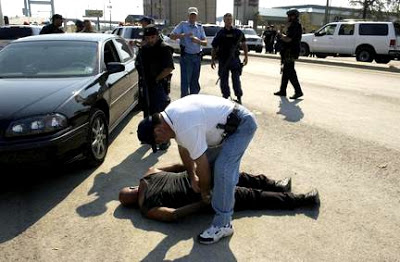 From survivors to looters

In the aftermath of Hurricane Katrina, people around the world felt sympathy for New Orleans. They saw images of residents trapped on rooftops by floodwaters, needing rescue by boat and helicopter. But then stories began to come out about looters and gangs among the survivors, and the official response shifted from humanitarian aid to military operation.

Then-Governor Kathleen Blanco sent in National Guard troops, announcing. “They have M-16s and are locked and loaded. These troops know how to shoot and kill and I expect they will.” Warren Riley, at that time the second in charge of the police department, reportedly ordered officers to “take the city back and shoot looters.”

In the following days, several civilians — almost all of them African American — were killed under suspicious circumstances in incidents involving police and white vigilantes. For years, family members and advocates called for official investigations and were rebuffed.

“Right after the hurricane there were individuals and organizations trying to talk about what happened on Danziger,” says Dana Kaplan, executive director of Juvenile Justice Project of Louisiana (JJPL), a legal and advocacy organization based in New Orleans. “But their voices were marginalized.”

There is evidence that local media could have done a better job. Alex Brandon, a photographer for New Orleans’ Times-Picayune newspaper who later went on to work for Associated Press, testified in the Henry Glover trial that he knew details about the police killings that he didn’t reveal. “He saw things and heard things that proved to be useful in a criminal investigation. He didn’t report them as news,” wrote Picayune columnist Jarvis DeBerry after the Glover trial concluded.

Former Orleans Parish District Attorney Eddie Jordan, who led an initial investigation of the Danziger officers, believes an indifferent local media bears partial responsibility for the years of cover-up. “They were looking for heroes,” he says. “They had a cozy relationship with the police. They got tips from the police, they were in bed with the police. It was an atmosphere of tolerance for atrocities from the police. They abdicated their responsibility to be critical in their reporting. If a few people got killed that was a small price to pay.”

Family members and advocates tried to get the stories of police violence out through protests, press conferences, and other means. Peoples Hurricane Relief Fund, an organization dedicated to justice in reconstruction, held a tribunal in 2006 where they presented accusations of police violence — among other charges — to a panel of international judges, including members of parliament from seven countries. Activists even brought charges to the United Nations, filing a shadow report in February 2008 with the UN Committee on the Elimination of Racial Discrimination in Geneva.

But it was not until late 2008 that a journalist named AC Thompson did what the local media failed to do, and investigated these stories in detail. “It’s unfortunate that it took a national publication to really dig to the root,” says Kaplan, referring to Thompson’s work. “In New Orleans the criminal justice system has been so corrupt for so long that things that should be shocking didn’t seem to be raising the kind of broad community outrage that they should have.”

In 2009, after years of pressure from activists and the national attention brought on by AC Thompson’s reporting, the U.S. Justice Department decided to look into the accusations of police violence. This has led to one of the most wide-ranging investigations of a police department in recent U.S. history. Dozens of officers are facing lengthy prison terms, and corruption charges have reached to the very top of the department.

The Danziger trial is expected to last two months. Kenneth Bowen, Robert Gisevius, Anthony Villavaso, and Robert Faulcon, the officers involved in the shooting, could receive life sentences if convicted. Sergeant Arthur Kaufman, who was not on the bridge, is charged only in the conspiracy and could receive a maximum of 120 years. Justice Department investigations of other incidents are continuing, and it is likely that some form of federal oversight of the department will be announced in coming months.

[Jordan Flaherty is a journalist and staffer with the Louisiana Justice Institute. His award-winning reporting from the Gulf Coast has been featured in a range of outlets including The New York Times, Al Jazeera, and Argentina’s Clarin newspaper. His new book is FLOODLINES: Community and Resistance from Katrina to the Jena Six. He can be reached at neworleans@leftturn.org, and more information about Floodlines can be found at floodlines.org. This article was originally published by Truthout. Find more articles by Jordan Flaherty on The Rag Blog.]