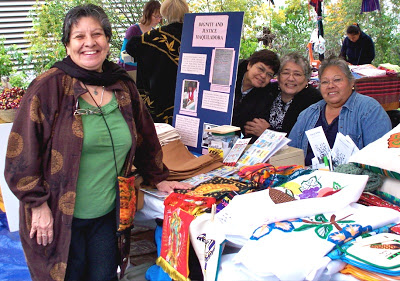 By Josefina Castillo and Judith Rosenberg / The Rag Blog / November 10, 2011

The Women and Fair Trade Festival is an annual Austin marketplace, now in its eighth year, that hosts artisan producers from women’s cooperatives from all over the world. Women and their representatives gather in Austin to meet local consumers for commerce, cultural celebration, and exchange. Austin Tan Cerca de la Frontera sponsors the two-day event, November 12-13, 2011, 10 a.m.-6 p.m., at The Old School, 1604 East 11th Street, Austin, Texas.

AUSTIN — The Women and Fair Trade Festival, established eight years ago by Austin Tan Cerca de la Frontera, is a community gathering where people can buy fair trade products while helping to sustain old indigenous traditions — and have the opportunity to interact with the direct producers of colorful arts and crafts. This community event celebrates the rich cultural diversity of our society, and presents an alternative to corporate globalization.

Through cooperatives, women become central participants in the management of their own products, maintain ancestral knowledge, support sustainable agriculture, and provide much needed funds for community development projects. Fair trade allows women to play central roles in the development of local economies.

This year, ATCFE has named Melissa del Bosque recipient of the John Ross Journalism Award 2011 for her reporting on Mexico and the U.S./Mexico Border in the Texas Observer. The award, to be presented Saturday, November 12, from 3 to 5 p.m, is given in recognition of Melissa’s independence, courage, and ability to place events within a deeper context.

Rag Blog editor Thorne Dreyer, Rene Valdez of Red Salmon Arts and Resistencia Bookstore, and noted documentary photographer Alan Pogue will pay tribute to the legacy of the great activist, poet, and author — and regular contributor to The Rag Blog — John Ross, who died earlier this year. They will also discuss the importance of independent media and alternate channels for coverage of other countries.

On Sunday, November 13, from 3 to 5 p.m., the second annual Trans-lingual Poetry Concert features Liliana Valenzuela and other Austin poets influenced by Latina, Middle Eastern, and African cultures, who live simultaneously in several cultures and languages. They help us hear and see the world created by trade and colonialism as well as lives and identities that crisscross and re-define borders. Other confirmed poets include Deborah Paredez, Carolina Ebeid, Maganthrie Pillay, Zara Houshmand, Fehintola Mosadomi, and Adesile Okeowo.

The impact of ‘free trade’

In Austin Tan Cerca de la Frontera we have seen face-to-face the impact of free trade policies on workers’ lives while organizing border delegations to visit Mexican workers in the maquiladora industry, with its assembly plants located in developing countries, owned by transnational corporations.

We have learned of exploitation not only in terms of salary and working conditions but also in the places where they live. The “colonias” lack the basic infrastructure to allow workers to live in a decent way: they have no paved roads, no sewage systems, and are marked by widespread environmental damage.

Just a few years ago Austin Tan Cerca made a study of where the money goes when you buy a pair of jeans at a department store. The actual producer, the person whose hands created the product, gets less than 1%. Transnational corporations (and their brand name distributors), retail stores, and manufacturing facilities keep 99% of the value. How can anybody believe this is free trade?

In 1999 — the same year that Austin Tan Cerca de la Frontera took its first steps to establish a relationship of solidarity with Mexican workers — the World Trade Organization, meeting in Seattle, became a stage for activists and ordinary working people on which to protest against corporate greed. The people in the streets of Seattle were able to feel the power of their solidarity against the giant corporations and government — and they managed to stop the WTO’s deliberations. All the ministers went home confused and empty-handed.

Austin Tan Cerca de la Frontera wants not only to protest against the rank injustice of the income inequality between the 1% and the 99%, but also to offer and be part of alternative proposals such as the Fair Trade movement. More and more voices have proposed “fair trade” since the 1994 passage of the North American Free Trade Agreement (NAFTA) and through the years in which workers and environmentalists learned in personal terms the emptiness of NAFTA’s promises.

Though the 99% have not yet declared a formal program, and have wisely refrained from listing demands, their yearnings must surely be in harmony with fair trade. If the 99% are willing to cross borders, they must be in sympathy with the maquiladora worker who 10 years ago had an opportunity to look her U.S. CEO in the eye and say, “We’re the ones that create the wealth. You’re the one that reaps the benefit. My children and I still don’t have running water.”

The communities we serve and their diverse cultures are like pearls of a necklace, beautiful and rich, connected by a common thread of hope in their artistic designs. In these challenging economic times we offer a new path, a new way to link a rich cultural heritage with modern alternative ideas and marketing — which is what a real democracy looks like and which suggests the future that we’d like to see.

[Josefina Castillo is an ex officio member of the board and Dr. Judith Rosenberg is president of Austin Tan Cerca de la Frontera.]