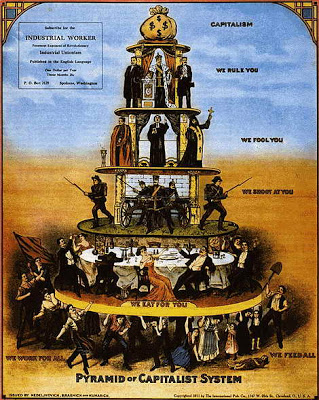 The Republican Party that Nixon invented melded the moneyed classes of the Northeast with the white evangelicals of the South. This odd couple went on to simultaneously steal from and oppress the rest of us. The moneyed classes were happy to let the New Puritans impose their stringent morality, since they could always just buy any licentiousness they wanted, regardless of the law. And the New Puritans were so consumed with cultural issues such as homosexuality, abortion, school prayer and (yes) fighting school desegregation that they were happy to let the northeastern Money Men waltz off with a lion’s share of the country’s resources, consigning most Americans to stagnant wages and increasing debt. The Reagan revolution consolidated this alliance and brought some conservative Catholic workers into it.

These domestic policies at home were complemented by wars and belligerence abroad, which further took the eye of the public off the epochal bank robbery being conducted by the American neo-Medicis, and which were a useful way of throwing billions in government tax revenue to the military-industrial complex, which in turn funded the think tanks and reelection campaigns of the right wing politicians. The Reagan fascination with private armies and funding anti-communist death squads contributed mightily to the creation of al-Qaeda, blowback from which fuelled even bigger Pentagon budgets, spiralling upward and feeding on itself. Terrorism is much better than Communism as a bogey man, since you can just intimate that there are a handful of dangerous people out there somewhere, and force the public to pay over $1 trillion to combat them. In fact, of course, less US interventionism abroad would create less blowback, and genuine threats are better addressed through good police work by multilingual FBI agents than by a $700 billion Pentagon budget.

As a result of the Second Gilded Age and its serf-like subservience to big capital, most corporations in the US don’t pay any income taxes, despite doing $2.5 trillion annually in business.

The Reagan Revolution included the stupid idea that you can cut taxes, starve government, abolish regulation of securities, banks, & etc., and still grow the economy. The irony is that capitalist markets need to be regulated to avoid periodically becoming chaotic (as in ‘chaos theory,’) but the people who most benefit from regulation are most zealous in attempting to abolish or blunt it.

What those policies did was create the preconditions for a long-term bubble or set of bubbles that benefited (for a while) the wealthiest 3 million Americans and harmed everyone else.

The average wage of the average worker is lower now than in 1973 and has been lower or flat for the past 35 years. That’s the condition of the 300 million or so Americans.

In the meantime, the top 1 percent has multiplied its wealth many times over and now takes home 20% of the national income, owning some 45 percent of the privately held wealth in the US.

The Right keeps promising us growth, but it turns out that “growth” is mainly for them, i.e. for the 3 million (and indeed mainly for about 100,000 within the 3 million).

Those 3 million are a new aristocracy, lords of the economy, who reward each other with tens of millions in bonuses for ceremonial reasons that have nothing to do with the jobs they actually perform. Bush has been trying to make them a hereditary aristocracy by getting rid of the estate tax.

That is why banks are refusing the government bailout if it restricts the salaries of the top officers — you don’t mess with the feudal lord’s prerogatives.

The enormous wealth of a thin sliver or people at the top of US society allows them to buy members of congress and to write the legislation that regulates their industries.

Congress capitulates to this ‘regulatory capture’ because its members have to buy hugely expensive television ads to remain competitive in elections. So they fundraise from the rich, and the rich have expectations (as Keating did of McCain).

These problems could be fixed with a graduated income tax and a closing of tax loopholes (after we get out of the recession or crash or whatever this is); by legislation criminalizing regulatory capture; by requiring mass media to run political ads for free as a public service (the public owns the airwaves); and by much shortening the election season (please).

A lot of America’s fiscal and educational problems were caused by congressionally mandated fixed sentences imposed on judges with regard to marijuana possession, as a sop to the New Puritans that make up 1/3 of the Republican Party. You have a lot of people serving 5 years in jail for having small amounts of pot. The states had to build new prisons to hold them all. They took the money out of the budget for higher education, abolishing the whole idea of state universities and causing tuitions to rise.

So you’ve got more ignorant people (because people can’t afford even “state” college), and fewer high-tech firms are founded; and you’re feeding and housing large numbers of harmless potheads with your tax dollars instead. The US maintains a vast gulag of nearly 2 million prisoners, putting us in the same league as Putin’s Russia. No country in Western Europe incarcerates a similar proportion of its population.

Mexico’s president wants to decriminalize the possession of small amounts of drugs such as marijuana, cocaine and heroin for personal use, though an arrest on possession charges would require entry into a program to kick addiction.

Decriminalizing possession of small amounts of drugs; decriminalizing marijuana altogether (and taxing the resulting industry); removing mandatory federal sentencing requirements; and letting states go back to educating their children instead of putting millions in jail; would solve another big batch of America’s problems.

So there you have it. Abolish puritanism in government policy; go back to using the government to regulate industries and finance and provide services; and fight terrorism with better public diplomacy and better police work instead of with militarization– and you might get out of this thing intact.

This entry was posted in RagBlog and tagged Monopoly Capitalism, Reaganomics, Republican Party. Bookmark the permalink.