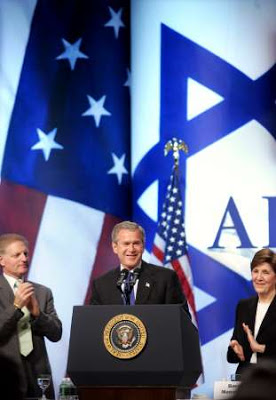 I want to follow up today on my postings over the weekend on how organizing to defend progressive congressional representatives and punish reactionary ones is far superior to street protests as political action on the Israeli-Palestinian issue.

People wrote to defend street protests or minded that I said I was annoyed. I stand by what I said. Street protests have not stopped the US Congress from turning Israel into a massive arms arsenal in the Middle East or from granting it $3 billion a year, in part for such military purposes. (Israel has received the lion’s share of US foreign aid in recent decades, even though people in Rwanda need the help more and even though the Israeli per capita income in the early zeroes has been something like $17,000 a year, more than Portugal or Poland and similar to Greece.) Protests have not stopped US complicity in the creeping Israeli colonization of the West Bank, including the area around Jerusalem. They have not stopped the 2006 or 2009 wars of their client on weak and virtually defenseless opponents such as the south Beirut tenement buildings or Gaza hospitals.

Street protests have their uses as a means of creating a political movement, but they are helpless in this case because the important decisions are taken on Capitol Hill. I wrote on Saturday:

Europe has ceded dealing with the Israelis to the United States. The people of the United States have ceded dealing with the Israelis to the US Congress. The US Congress generally abdicates its responsibilities when faced with large powerful single-issue lobbies such as . . . the Israel lobbies. So Congress has ceded Israel, and indeed, most Middle East, policy to the American Israel Public Affairs Committee and its myriad organizational supporters, from the Southern Baptist churches to the Jewish Institute for National Security Affairs. The Israel lobbies take their cue on what is good policy from the Israeli government and the Likud Party. So, US Israel policy is driven by . . . the Israeli rightwing. That is why Congress voted 309 to five to support Israel’s war on the people of Gaza, with 22 abstaining.

The US Senate and the US House of Representatives are not afraid of street protests in San Francisco. And why should they be? What sort of threat is it to them, that we say if they don’t change their legislation we will . . . walk in the street? Their response would be, “Make sure you have comfortable shoes; now, I have to see this nice lobbyist in my office in a thousand dollar suit and alligator shoes who has an enormous check for my current political campaign.”

The representative would say to us, “I want to be reelected. You cannot stop that by walking in the street, nor can you help me win by doing so. This televangelist from an Israel lobby, in contrast, is going to help me buy loads of television commercials dissing my opponents in the next election. And, if I don’t help the gentleman out, he’s threatening to give the money instead to my rival and unseat me. So you’ll forgive me if I turn my back on you and wish you well with your, uh, walking. But I’ve got an election to win, rather than to lose, and you are irrelevant to that task.”

And the big oak door in the Dirksen building slams in our faces.

The US Congress is the best proof of evolution. Its members are constantly subjected to unnatural selection by single-issue lobbies.. Run for office demanding gun control, and you will likely lose, because the National Rifle Association will arrange for its members to fund your opponent’s campaign. If you do win, the NRA will redouble its efforts for the next time, which if you are a representative, is only 2 years later. After a while, there just aren’t a lot of strong gun control proponents in Congress.

It is the same with the Israel lobbies, which are just as single-minded. We have had people in Congress who dared criticize Israel. They were Paul Findley, Charles Percy, William Fulbright, Roger Jepson, Pete McCloskey, Earl Hilliard, and Cynthia McKinney. They were all successfully ousted by AIPAC-coordinated campaigns. US political races are close and candidates have flaws, so AIPAC often denies in public that it made the difference and implies with high dudgeon that there is something wrong with alleging that it did. In private, AIPAC officials boast endlessly on the HIll about how no one messes with them and survives.

The reason AIPAC and its constituencies among the Evangelicals and American Likudniks has been so successful is that there is virtually no countervailing political force. Madison and other Founding Fathers set up the US, as Ian Lustick has argued, on the assumption that on most important issues there would be opposing factions who would check each other in the legislature. The drawback of their system is that when there is only one effective faction on an issue, it completely dominates politically. Madison’s system worked to prolong the heyday of Big Tobacco far beyond what was reasonable. Anti-smoking campaigners who knew that smoking kills you dead could not make headway with Congress because the tobacco-growing and cigarette industries would counter-lobby.

But on some issues there is no one on the other side of it to lobby and threaten Congressmen. Thus, there was not much precentage until recently in pushing for an end to the boycott on Communist Cuba, since the Florida Cuba lobby would punish you politically and virtually no one would reward you.

Sometimes it is alleged that AIPAC is so successful because those Americans who support Zionism are extremely wealthy. But this thesis is wrong on two counts.

First, the general society in the US generates $13 trillion a year, and no small single-issue faction can compete with that vast public wealth. The general public could always out-fund a smaller single-issue opponent if the general public was motivated to do so. While in the past, raising small $25 and $50 contributions from large numbers of people was difficult, Obama showed that it can now be done.

Second, AIPAC does not manage to get its affiliated PACs to give that much money to individual campaigns (pdf), as the Washington Report on Middle Eastern Affairs points out.

Sometimes it is just $1000 or $2000, sometimes it is much more. Of course, one has to take into account that they might fund a rival with much more money if the congressperson defied them.

I wrote on Saturday:

a lot of US congressional races, which happen every two years, are close, and [even] $4000 is very welcome, especially when there are no costs to signing AIPAC letters and supporting AIPAC positions because there is nobody to speak of on the other side. And if the money comes in every campaign, along with lots of office visits and letters and local community support, it builds loyalty over time.

AIPAC gets in before the ground floor, introducing potential candidates to big donors and has its supporters in the Democratic party machine, e.g., vet candidates. Tom Hayden, a leftist American if there ever was one, had to be approved of by the Bermans to amount to anything in southern California Democratic politics, and it led to his taking an unfortunate stand on the 1982 Lebanon War of which he came to be ashamed. If all this is true for Hayden, imagine how it is with some used car salesman in southern Indiana.

So I am proposing a coordinating committee that would have two purposes:

1. It would develop a large database of leaders of concerned civic organizations so as to tip them when big votes in Congress were coming. These organizations would then tip their members, who would deluge Congress with millions of emails on what is at stake. There are lots of allies in US civil society for this enterprise, including religious congregations (liberal synagogues, Presbyterians, Catholics, Quakers, Mennonites, Muslim mosques, Unitatiran Universalists, etc.). Such an effort could also mobilizer Greens, Libertarians, and Socialists, as well as sections of the Democratic and Republican Parties.

2. It would direct sympathetic PACs to donate money in close races to anti-war candidates,and to defend representatives and senators who dared buck the Israel lobbies from reprisals. It would also try to unseat hawks like Joe Lieberman and Saxby Chambliss.

This America First Public Affairs Committee could easily be organized and could quickly become very influential. All we would need to do is win a couple of rounds with AIPAC and suddenly congressional votes would be much closer.

From looking at the reaction to my post on Saturday, I can see that a lot of people just don’t understand how all this happens. They don’t know that the US Congress is arming Israel to the teeth and passing laws that implicitly enable colonization of the Palestinians and make it impossible for the Palestinians effectively to resist, even peacefully. Others accept the argument but think that Congress can’t be changed in this regard. But of course it can be changed.

I pointed out Saturday,

I underline that such an organized push in American politics for more equitable policies in the Middle East is not anti-Israel, but rather intended to help Israel find a way forward with its neighbors that does not involve continued displays of sado-masochistic politics on both sides. Make no mistake. AIPAC and other rightwing Israel lobbying organizations are enablers and drug dealers, hooking Israeli politicians on the high of power and violence, and we can only heal Israel and Palestine by cutting off that supply.

Such an effort would also have wider implications for US foreign policy. In the coming two or three decades, the US military industrial complex will want to fight several ruinous wars on major oil-producing and gas-producing states not in the US political orbit, such as Iran. At the moment, the US public is helpless before such ambitions, because the War Lobby is even more effective than the Israel lobbies are.

With regard to protecting and rewarding the principled members of Congress who do put America first the collective blog Journalscape understood exactly what I am talking about and tried to dig up donation or contact information for the five who voted “no”:

These 5 and the 22 who voted ‘present’ are now on the endangered species list. (I did not find that anyone made a similar list of donation/ contact information for the 22; they are in danger, too). AIPAC officials are as we speak holding secret meetings with donors to strategize how to turn them or get rid of them even as we speak. But since the parts of the blogosphere that care about rights for Palestinians, about demilitarizing the Middle East, and about helping Israel attain its potential as a positive factor in Middle Eastern affairs instead of attack dog for people like Dick Cheney in the region, don’t seem to understand how pivotal lobbying, Congress, and loyalty to political friends are– likely we will go on losing 309 to 5.