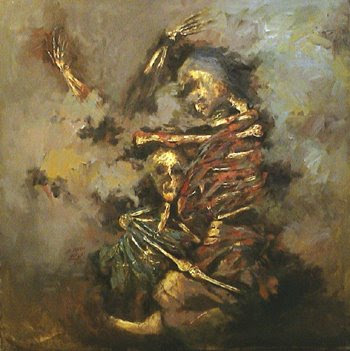 And he shreds the MSM while he enumerates the litany of horrors and grief in Iraq. It is disgusting how the American press chooses the things we are allowed to know. And their complicity in the lead up to this war of lies is criminal in every respect. No one should dare have any sympathy.

By now, summer of 2008, excess deaths from violence in Iraq since March of 2003 must be at least a million. This conclusion can be reached more than one way. There is not much controversy about it in the scientific community. Some 310,000 of those were probably killed by US troops or by the US Air Force, with the bulk dying in bombing raids by US fighter jets and helicopter gunships on densely populated city and town quarters.

In absolute numbers, that would be like bombing to death everyone in Pittsburgh, Pa. Or Cincinnati, Oh.

Only, the US is 11 times more populous than Iraq, so 310,000 Iraqi corpses would equal 3.4 million dead Americans. So proportionally it would be like firebombing to death everyone in Chicago.

The one million number includes not just war-related deaths but all killings beyond what you would have expected from the 2000-2002 baseline. That is, if tribal feuds got out of hand and killed a lot of people because the Baath police were demobilized or disarmed and so no longer intervened, those deaths go into the mix. All the Sunnis killed in the north of Hilla Province (the ‘triangle of death’) when Shiite clans displaced from the area by Saddam came back up to reclaim their farms would be included. The kidnap victims killed when the ransom did not arrive in time would be included. And, of course, the sectarian, ethnic and militia violence, even if Iraqi on Iraqi, would count. And it hasn’t been just hot spots like Baghdad, Basra, Mosul and Kirkuk. The rate of excess violent death has been pretty standard across Arab Iraq.

As for the Iraqis killed by Americans, like the 24 civilians in Haditha, the survivors are not going to be pro-American any time soon. The US can always find politicians to come out and say nice things on a visit to the Rose Garden. But the people. I don’t think the people are saying nice things in Arabic behind our backs.

The wars of Iraq– the Iran-Iraq War, the repressions of the Kurds and the Shiites, the Gulf War, and the American Calamity, may have left behind as many as 3 million widows. Having lost their family’s breadwinner, many are destitute.

Although it is very good news that the number of Iraqis killed in political violence fell in May to 532 according to official sources, the number was twice that in March and April. And,it should be remembered that independent observers have busted the Pentagon for grossly under-reporting attacks and casualties. If someone shows up dead and they aren’t sure exactly why, it isn’t counted as political violence, just as an ordinary murder. Attacks per day are measured by whether the mortar shell scratches any US equipment when it explodes. If not, it didn’t happen. McClatchy estimated a year and a half ago that attacks were being underestimated by a factor of 10.

By the way, isn’t is a little odd that the death rate fell in the month of the Great Mosul Campaign? I conclude that either it can’t have been much of a campaign or someone is cooking the death statistics.

This entry was posted in RagBlog and tagged Iraq, Military, Warfare. Bookmark the permalink.