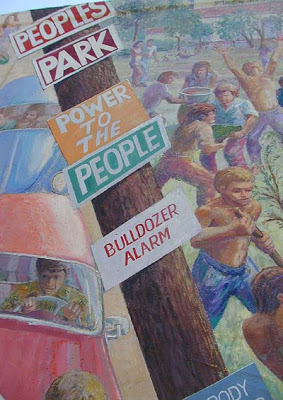 I repeat this phrase, loudly and with more emphasis: ‘Our politics have not changed.’ Suddenly, with no conscious effort on my part, in an atavistic, Monty Pythonish gesture, my left arm — and clenched fist — shoot straight up in the air.

[This is the second of two articles written for The Rag Blog by Judy Gumbo Albert, a founder of the Sixties countercultural protest group the Yippies, on recent activities in California commemorating the work of Sixties radicals. See her previous article here.]

Sunday around 3 p.m. I find myself in Berkeley’s People’s Park, in front of a crowd of at least 500 what, back in the day, we called hippies and freaks, letting their freak flags fly. Actually, the crowd was maybe 50% hippies and freaks, and the other 50 % just plain folks: men, women, children, neatly dressed students, Vietnam vets, homeless women and men, belly dancers, bongo drummers, black, white and multi-ethnic, one crowd, together, happy under the warm California sun. Sitting on remarkably well tended and clipped grass, with the unmistakable sweet odor of that other grass thick in the air. Just like I remember.

Building People’s Park led to Berkeley’s largest community uprising of 1969. And gave Ronald Reagan a platform on which to build his greed-driven, free-market, laissez-faire, capitalist-loving presidency — whose upshot is, at least in part, the global financial crisis we suffer today. The economic “chickens” that Malcolm X first warned us about at the time of the Kennedy assassination have “come home to roost.”

In April 1969 a few thousand of us, including my late husband Stew Albert and I, along with many, many others, created a green, eco-before-it-was-fashionable community out of a muddy parking lot owned by the University of California. We dug the earth, laid sod, planted gardens, cooked food, played music, built stuff, and just enjoyed. There were no official or elected leaders, just strong personalities; most of us felt empowered to be our own leader, some of us ended up more “leadership” than others. Decisions (such as they were) were made by consensus (such as it was in those days). At least that’s what I recall.

Shortly after we seized the Park, the Berkeley police sealed it off with a barbed wire fence. Police and National Guard tear gassed the entire city, battled thousands of us in the streets, and, for the first time that I know of in the 1960s, used deadly force against white demonstrators, wounding 100 protestors and killing a young man named James Rector.

Forty years later, it’s easy to spot Michael Delacour. Mike, one of the Park’s originals, is always recognizable by his craggy face and long formerly black now silver hair falling way past his shoulders. He is, as far as I can tell, one of the unofficial keepers of the park’s flame.

He asks if I want to speak. How can I decline?

I start by quoting the Berkeley Liberation Program which a group of about 40 of us put together in an Oakland hotel because, in the immediate aftermath of the Park uprising, the City of Berkeley banned gatherings of more than a few people. Naturally, we model our program on the 10 point Platform and Program of the Black Panther Party. The people of Berkeley, I begin, passionately desire human solidarity, cultural freedom and peace. No reaction from the crowd. Not interested? Too stoned? Time to move on — I’ll talk about Stew’s death. I urge anyone with Hepatitis C to get tested. I tell the story of how, two days before he dies, Stew asks me to type on his blog: “My politics have not changed.” I repeat this phrase, loudly and with more emphasis: “Our politics have not changed.” Suddenly, with no conscious effort on my part, in an atavistic, Monty Pythonish gesture, my left arm — and clenched fist — shoot straight up in the air.

It’s just like driving or riding a bike. There are some things you never forget.

I feel great. The crowd doesn’t exactly roar but at least I’ve caught their attention. Stewie would have been really happy.

Wavy Gravy is the event MC. By now his trademark clown outfit is a bit worn, yet he’s still the same kindly, funny person who used to unintentionally scare my young daughter if he turned in her direction. Which leads, in some roundabout, two degrees of separation way, to Zayd Dohrn’s play Magic Forest Farm, which I saw recently at the Marin Theatre Company. Zayd was born when his parents, Weather Underground folks Bill Ayers and Bernardine Dohrn, were underground. His play directly addresses the question: “How do kids raised in the shadow of the Sixties keep the parts of that experiment that were healthy — the idealism, the hope, the courage — while getting rid of the narcissism and silliness that had the potential to undermine it?”

How indeed? It turns out that some of our most cherished, countercultural values—”do your own thing,” dope, nudity, sexual experimentation—had, at least in Zayd’s fictional recreation of Magic Forest Farm, negative, dysfunctional consequences for some — not all — of the kids who lived there. I don’t doubt for a moment that the play speaks an inconvenient truth — especially because, immediately after the play, I meet a total stranger in the woman’s bathroom who feels compelled to spill her story to me. The headline is that, as her mother lay dying, this woman was finally able to forgive her for raising her in such a commune.

As I recall, the women’s movement was just coming into full flower in Berkeley during People’s Park. We were not especially sympathetic to mothers of young children. Nor did it occur to us — or me at least — to empathize with the mothers of those teenagers we so warmly welcomed in People’s Park. The Free Speech Movement’s Jack Weinberg coined the phrase: “Don’t Trust Anyone Over Thirty” which morphed into Yippie leader Jerry Rubin’s “Kill Your Parents” — a slogan which, Jerry later admitted, didn’t work because people thought he meant it literally. But symbolically Jack and Jerry were right — to change the system and completely re-invent ourselves, we had to break from the repressive, war-mongering, right wing, dysfunctional values of our parent’s generation.

The kids of 1960’s parents I know today are terrific people. They are teachers, lawyers, parents, playwrights, writers, documentary film makers, professors, health care professionals, entrepreneurs. But there are also some who didn’t make it, kids who tragically ended up in jail or dead by their own hand. Despite all the humane, positive and progressive values we passed on to our children, our 1960’s activism also gave them difficult stuff to work through. And resent. And rebel against. This may be the moment when our 60’s generation’s chickens are coming home to roost in their own right.

I’m glad that Stew and I were able to pass our Yippie values to our daughter. I’m saddened if they caused her grief or harm in any way. Still and all, my politics have not changed.

[Judy Gumbo Albert was an original member of the 1960s countercultural protest group known as the Yippies —along with Abbie and Anita Hoffman, Jerry Rubin, the journalist Paul Krassner, the folk singer Phil Ochs and her late husband Stew Albert who died on Jan. 30, 2006. Judy co-authored The Sixties Papers: Documents of a Rebellious Decade (Greenwood Press, 1984) and The Conspiracy Trial (Bobbs-Merrill, 1970). Her articles available online include “The Battle of Chicago,” about the 1968 Democratic Convention, and “What Were Those 1960’s Terrorists Thinking Anyway,” about the 1971 Mayday anti-war protests.