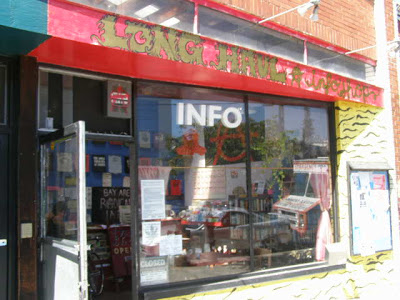 More than a dozen computers seized in questionable search

BERKELEY, CA — At 10:30 am on Wednesday, August 27th, the UC Berkeley police, plainclothes FBI agents, and an Alameda County sheriff raided at gunpoint the Long Haul, a long-standing community library and info shop. Police spent at least an hour and a half searching the premises without allowing Long Haul members entry to their building. More than a dozen computers and other equipment were seized in the morning raid. Having made no attempt to contact Long Haul members, agents forced their way into the building by entering a neighboring non-profit office with guns drawn. Police refused to provide a search warrant until after the raid was over and property was seized.

“This is an outrageous abuse of authority by the federal government,” said TKTK, a member of the Long Haul. “What cause could the police have to come into a community center like the Long Haul and seize information belonging to the people of Berkeley? They must return our property immediately.” The police went through every room, both public and locked – cutting or unscrewing the locks – and removed every computer from the building. Most of the computers taken were removed from an un-monitored public space where people come to use the computers just as they would at a public library. The remaining computers were taken from closed offices where they are needed for the day-to-day operation of the work done by members. Offices were rifled through, and a list of people who had borrowed books from the library was checked, as was the sales log. The warrant, which was produced after the raid, had little relevant information (claiming the officers were searching for 1 – Property or things used as a means of committing a felony; 2 – Property or things that are evidence that tends to show a felony has been committed, or tends to show that a particular person has committed a felony).

The Long Haul has been a community resource for 25 years, offering accessible meeting space to radical groups, access to alternative magazines and journals, a lending library and a historical archive of independent media. Long Haul also produces the well-known slingshot organizer pocket calendar. Multiple groups have met and continue to meet there as one of the few remaining inexpensive radical venues in the increasingly gentrified bay area. The same pattern of abuse was experienced recently when the convergence space for protesters against the Democratic National Convention in Denver was raided and supplies seized. Since the Long Haul raid occurred, lawyers have been working to seek the immediate return of the seized property, though the Long Haul continues to welcome legal support. The Long Haul is also in urgent need of computers to replace what was taken, while the fight continues to get the hard drives returned.

Long Haul members have vowed to protest this latest act of political repression. Check the Long Haul website (www.thelonghaul.org) for more information as it becomes available.

Pictures and video of the Long Haul and of the officers involved are online at East Bay.

This entry was posted in RagBlog and tagged Official Repression, Police State. Bookmark the permalink.