Justice for the King’s Men May Be Served 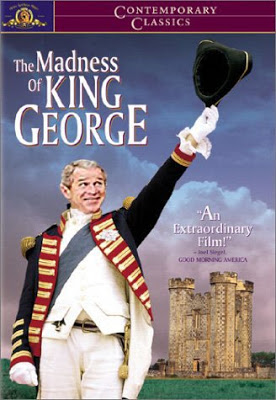 White House Aides Can Be Subpoenaed
By David Stout / August 1, 2008

WASHINGTON — President Bush’s top advisers cannot ignore subpoenas issued by Congress, a federal judge ruled on Thursday in a case that involves the firings of several United States attorneys but has much wider constitutional implications for all three branches of government.

Unless overturned on appeal, a former White House counsel, Harriet E. Miers, and the current White House chief of staff, Joshua B. Bolten, would be required to cooperate with the House Judiciary Committee, which has been investigating the controversial dismissal of the federal prosecutors in 2006.

While the ruling is the first in which a court has agreed to enforce a Congressional subpoena against the White House, Judge Bates called his 93-page decision “very limited” and emphasized that he could see the possibility of the dispute being resolved through political negotiations. The White House is almost certain to appeal the ruling.

It was the latest setback for the Bush administration, which maintains that current and former White House aides are immune from congressional subpoena. On Wednesday, the House Judiciary Committee voted along party lines to recommend that Karl Rove, a former top political adviser to President Bush, be cited for contempt for ignoring a subpoena and not appearing at a hearing on political interference by the White House at the Justice Department. 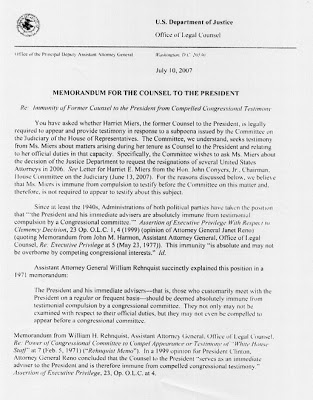 Although Judge Bates did not specifically say so, his ruling, if sustained on appeal, might apply as well to Mr. Rove and his refusal to testify.

The House has already voted to hold Ms. Miers and Mr. Bolten in contempt for refusing to testify or to provide documents about the dismissals of the United States attorneys, which critics of the administration have suggested were driven by an improper mix of politics and decisions about who should, or should not, be prosecuted.

Judge Bates, who was appointed to the bench by President Bush in 2001, said Ms. Miers cannot simply ignore a subpoena to appear but must state her refusal in person. Moreover, he ruled, both she and Mr. Bolten must provide all non-privileged documents related to the dismissals.

Ms. Miers and Mr. Bolten, citing legal advice from the White House, have refused for months to comply with Congressional subpoenas. The White House has repeatedly invoked executive privilege, the doctrine that allows the advice that a president gets from his close advisers to remain confidential.

In essence, Judges Bates held that whatever immunity from Congressional subpoenas that executive branch officials might enjoy, it is not “absolute.” And in any event, he said, it is up to the courts, not the executive branch, to determine the scope of its immunity in particular cases.

“We are reviewing the decision,” Emily Lawrimore, a White House spokeswoman, said. Before the decision was handed down, several lawyers said it would almost surely be appealed, no matter which way it turned, because of its importance.

Democrats in Congress issued statements in which they were quick to claim victory in the struggle with the administration over the dismissals of the federal prosecutors and other occurences in the Justice Department, and that they looked forward to hearing from the appropriate White House officials.

“I have long pointed out that this administration’s claims of executive privilege and immunity, which White House officials have used to justify refusing to even show up when served with congressional subpoenas, are wrong,” said Senator Patrick J. Leahy, Democrat of Vermont who is chairman of the Senate Judiciary Committee.

Mr. Leahy’s House counterpart in the House had a similar reaction.

“Today’s landmark ruling is a ringing reaffirmation of the fundamental principle of checks and balances and the basic American idea that no person is above the law,” said Representative John D. Conyers, the Michigan Democrat who is chairman of the House Judiciary Committee.

This entry was posted in RagBlog and tagged Congress, Criminal Justice, White House. Bookmark the permalink.