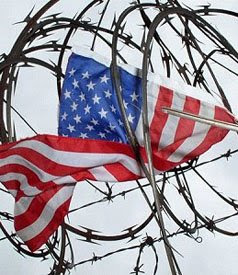 The Supreme court may hear the case of Ali Saleh Kahlah al-Marri who has been detained in a brig in South Carolina for five years. Photo from www.psaonline.
‘The Supreme Court is now being asked to consider the legality of Marri’s detention, which is one of the broadest and most controversial assertions of executive authority since the Sept. 11, 2001, attacks.’
By Jerry Markon / November 9, 2008

Ali Saleh Kahlah al-Marri was close to going on trial for fraud when prosecutors marched into an Illinois courtroom with a demand. Dismiss the charges, they said, because President Bush had just designated the defendant an enemy combatant.

Marri’s attorneys protested, but U.S. Attorney Jan Paul Miller declared that the military had already taken custody of the Qatari national, now deemed an al-Qaeda sleeper agent. “There is no longer a judicial proceeding before this court,” he said.

With that, Marri was whisked to a Navy brig in Charleston, S.C., where he has spent more than five years. His case raises a question with vast implications for presidential power and civil liberties: Can the military indefinitely detain, without charge, a U.S. citizen or legal resident seized on U.S. soil?

The Supreme Court is now being asked to consider the legality of Marri’s detention, which is one of the broadest and most controversial assertions of executive authority since the Sept. 11, 2001, attacks. Marri’s attorneys want the court to overturn an appellate ruling that backed the administration. The final brief is due Monday, and the justices are expected to decide soon whether to take the case.

Bush administration officials argue that the ability to detain Marri — who they say was planning a wave of post-Sept. 11 attacks — is vital to protecting the nation during wartime. “Like the al-Qaeda forces that struck America on the morning of September 11,” Marri “entered the United States to plan and carry out hostile or war-like acts,” they argued in their brief.

Marri’s attorneys say such detention power is unconstitutional and dangerous, raising the possibility that the government could one day snatch anyone off the street, even a political opponent, and lock him up without a trial. A prominent group of former judges and Justice Department lawyers, along with retired military officers, filed briefs backing Marri’s position. They include Maj. Gen. Antonio M. Taguba, who led the Army’s first official investigation into abuses at Abu Ghraib prison in Iraq.

The ruling supporting Bush is “a grave threat to the civil liberties of American citizens,” said the brief submitted by people including former attorney general Janet Reno and former federal judge Abner Mikva, a longtime mentor to President-elect Barack Obama.

The case poses an early test of Obama’s approach to detainee and terrorism issues. Obama’s Justice Department would almost certainly argue before the justices if the court hears the matter, raising the possibility that he could change the government’s position.

While Obama has strongly opposed Bush on terrorism, his views on Marri and enemy combatants held inside the United States are unclear. Obama has promised to abolish military commissions underway at Guantanamo Bay, Cuba, and has said accused terrorists should be tried in civilian courts or military courts-martial.

He has also vowed to aggressively fight terrorism. Obama’s transition office did not return a telephone call Friday seeking insight into his thinking on the Marri case.

Experts said the new president could seek to charge Marri again in federal court but could also back Bush’s position — and conceivably use broad detention authority if the Supreme Court upholds it. Obama’s national security team may persuade Obama “that we have to worry about another attack, and in case of an attack we need this power,” said Stephen A. Saltzburg, a George Washington University law professor and former Justice Department official.

Marri, a graduate student in Peoria, Ill., when he was arrested in December 2001, is the last of three designated enemy combatants held since 2001. His case is most similar to that of Jose Padilla, a U.S. citizen originally accused of attempting to explode a radiological “dirty bomb” in the United States, because both were arrested inside the United States.

But Padilla was transferred to civilian custody to face terrorism charges before the Supreme Court could take up the military’s power to detain him. The Justice Department is now trying to differentiate between holding Marri, a lawful resident, and U.S. citizens. But legal specialists say citizens and residents have the same due process rights — a position the Bush administration itself took earlier in Marri’s case — so any high court ruling would apply to both.

In December 2002, Marri was charged in federal court with lying to the FBI and with using a false name and a stolen Social Security number to apply for bank accounts in Macomb, Ill., for a fictitious business. But on June 23, 2003, Bush ordered the attorney general to turn him over to the military.

The government says Marri trained at an al-Qaeda camp and met Osama bin Laden, and officials have said that the FBI came to think he was al-Qaeda’s senior operative in the United States. His attorneys acknowledge that the allegations are serious but say they must be proved in a civilian court.

A divided U.S. Court of Appeals for the 4th Circuit ruled in July that the president had the power to detain Marri but that he could contest that detention in court. If the Supreme Court declines the case, lawyers say the government could continue to detain people in the Charleston brig because it lies in the 4th Circuit.

Jonathan Hafetz, an attorney with the American Civil Liberties Union who represents Marri, said his client’s detention “is the broadest and most radical assertion of detention power since September 11. That the president can order the military to seize someone from their home, their business, from the streets and lock them up in jail potentially forever, without trial, goes against 230 years of American precedent and the basic idea that this country was founded on.”

Bobby Chesney, a national security law specialist at Wake Forest University, said critics are overstating the potential risk because anyone held could file a court challenge. “The claim isn’t that the president can detain whoever he wants, it’s that he can detain al-Qaeda members,” Chesney said. “This notion that the president is asserting some royal prerogative is silly.”