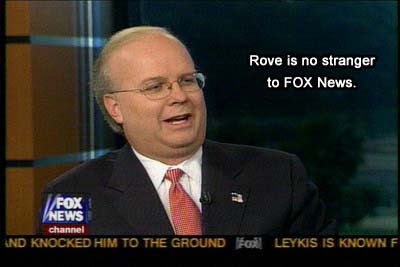 Here is a succinct statement of what’s wrong with The System, as we used to call it. Karl Rove is an election analyst for Fox News.

“Fox News host Chris Wallace also came to Rove’s defense, asking rhetorically, ‘Why it is that if Congress and the White House are having a fight about executive power, that that should in any way constrain an independent news organization’s decision as to who is it going to have on its payroll?'”

Aren’t such close ties between government and private industry a hallmark of fascism?

Appearing at a gathering of television critics in Beverly Hills, Rove and network executive John Moody brushed aside suggestions that Rove’s continued involvement in the presidential race, informal or not, might pose a conflict in his capacity as a Fox News contributor.

Rove, the chief strategist for U.S. President George W. Bush’s 2000 and 2004 election victories and former deputy chief of staff in his administration, left the White House last August and joined the Fox News team in February 2008.

“I do talk to people in politics all across the country, some of whom are very active in the campaign (but) I play no official role, or ongoing role,” he said in answer to a question about whether he works for the McCain operation in any way.

“I do get phone calls,” he added. “I’m having dinner later this week with a great friend of mine who just happens to be the Republican state chairman of a battleground state. He’s going to be in Washington, and it’s not just the quality of steak I’m going to fix him that’s caused him to stop by the house and pick my brain. So that’s just a reality.”

Asked whether Rove was on “the honor system” regarding his contacts with top McCain campaign operatives such as Steve Schmidt, Moody replied: “He’s always on the honor system. All of our employees are.”

“We get most of our information about the McCain campaign from our correspondents,” Moody added. “I don’t think Karl would cross an ethical line like that.”

Rove also dismissed the notion that his refusal to answer congressional subpoenas to testify in a probe of the Bush administration’s firing of federal prosecutors amounted to too much political baggage for a network news analyst to carry.

“It is not between me and Congress,” he said. “This is between the White House and Congress. This is long-standing battle over the principle of executive privilege and the ability of the president to receive advice from senior advisors and for senior advisors not to be at the beck and call of Congress to testify.”

He also said that like fellow Fox News analyst Howard Wolfson, a former top strategist and communications director for Senator Hillary Clinton’s presidential campaign, his job was to help viewers “better understand” the political process based on his experience.

Fox News host Chris Wallace also came to Rove’s defense, asking rhetorically, “Why it is that if Congress and the White House are having a fight about executive power, that that should in any way constrain an independent news organization’s decision as to who is it going to have on its payroll?”