Kate Braun :
Samhain, or Halloween, begins ‘the time of
no time’

Also called Third Harvest and All Hallows Eve, this is a fire festival and should be celebrated outdoors. 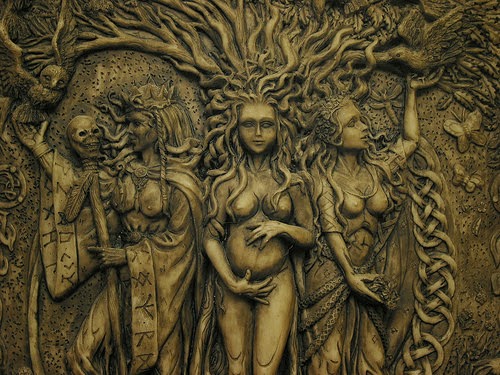 The wise old Crone is depicted here as one the three stages of the Goddess. Image from RosesCrystal.

Saturday, October 31, 2015, is Samhain, which you may also call Halloween, Third Harvest, and All Hallows Eve. This is a fire festival and should be celebrated outdoors if at all possible. Be sure to have a visible flame, whether a bonfire or some candles or a smaller fire in a cauldron or barbecue grill. It will be important to save the ashes from your fire, too. When they are cool, spread them over the garden as this blesses the land.

After your guests have arrived and before the festivities begin, be sure to ceremonially sweep the area in which you will be celebrating. Include your guests in this activity by passing the broom or besom from one to another until all have had a chance to sweep a bit. This symbolizes sweeping away the old and opening the door to the new.

This is also the beginning of “the time of no time,” which will last until the Winter Solstice/Yule celebration of Lord Sun’s reemerging energy. It is a period of rest and rejuvenation for the soul, much as the land benefits from lying fallow for a time. Use this time to identify and set new goals for not only the rest of this year but also for 2016, but be practical in your choices. Given the astrological influences of 2015, major changes will come, but they are likely to come in smaller increments, not larger ones, especially in 2016.

Use primarily the colors black and orange in your decorations and dress. Use the colors red, brown, and golden yellow as accent colors. Decorate with pumpkins, gourds, cornstalks, brooms or besoms, apples, black cats, jack-o-lanterns, and cauldrons. A representation of these things will do, although if your festivities include persons who enjoy carving pumpkins it would be nice to have some for that purpose.

You should also honor the Crone at this time. Contrary to popular imagination and cartoon animation, the Crone is not wicked or evil or ugly. There are several methods of defining Crone-ness: at menopause, on a woman’s 50th or 60th birthday, at the date of the woman’s second Saturn return (this would need to be dated by an astrologer as it involves some complicated calculations).

The Crone is an older, wise woman. Typically she remembers and recounts memorable tribal or family events. Think of your grandmothers and share some of the stories you remember them telling you, especially stories that were told repeatedly.

You should be sure to honor the dead during your celebrating. As at Beltane, the veil between worlds is very thin at Samhain and communication with those who have passed over is more possible. Drink a toast to those who have passed over; they may answer you in a dream this night. You may also bury apples near the street as food for wandering spirits and place a lighted candle in a window to help any wandering spirits find their way.

It used to be the custom to dress in costume so as to confuse any spirits who might want to play tricks on the living or seek revenge for wrongs; nowadays we dress in costume for fun. If this pleases you and your guests, it can be a way to enrich your enjoyment of the evening.

Kate will be participating in a Spiritual Life Productions Metaphysical Fair on Saturday and Sunday, October 24-25, 2015, at the Marchesa Hall and Theater in Lincoln Village, Austin.