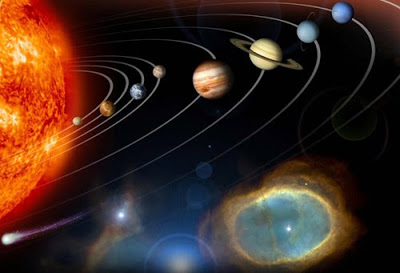 Galactic Synchronization or end of the world? This illustration shows how some project the planets in the Milky Way to be aligned on the Winter Solstice, December 21, 2012. Image from About2012.
Winter Solstice 2012:
Will planetary alignment
bring new cosmic balance?

Friday, December 21, 2012, is Yule, the Winter Solstice. This year, according to the Mayan Calendar, a major cycle concludes, which is said to prompt major changes in the spiritual collective consciousness.

No, the world is not going to end; no, the X-Files prognostications of an alien invasion are not for real. But this year’s Galactic Synchronization, when lore says that the planets will come into alignment not only with themselves but also with the center of the Milky Way, implies a shift in the cosmic resonance that should affect all beings on Planet Earth.

Consider this: each planet in our solar system vibrates to a specific frequency which may be expressed as a musical note; when all the planets are in alignment, they vibrate in harmony; not dissonance, but harmony. The Galactic Synchronization brings this “harmony of the spheres” to the entire galaxy, creating a symphony of celestial vibrations attuned to balance in all things.

Weather permitting, I recommend you spend some time outdoors on Solstice Night. Open your senses. Breathe deeply and evenly; seven yoga-breaths (in through the nose to fill all the empty spaces in your body such as sinus cavities and the spaces between spinal vertebrae, hold a short time before releasing the breath slowly and evenly through a slightly open mouth) will put you in an Alpha-rhythm and open you to the meditative state.

Observe the moon, the stars, whatever planets may be visible in your area, and the night sky. Listen to the wind, to birdsong, to animals bustling through the brush, to whatever your ears notice. Pay attention to your dreams this night; you may receive insights that will prove helpful to you as we move forward into not only a New Year but also a New Balance.

Winter Solstice is a reestablishing of balance. We will notice the hours of daylight increasing daily as Planet Earth awakens from her deep meditative state to the new beginning that is 2013. What this New Year will bring is yet to be revealed. Each individual will have an individual response to the Galactic Synchronization, and while general trends will move us collectively to a better balance, each individual will still be walking an individual path to achieve that balance.

My feeling is that there will be a greater sense of responsibility to Planet Earth and that there will be a movement toward greater harmony in life, work, and play. My hope is that Yuletide 2012, truly marks the beginning of a more harmonic relationship between not only individuals but also nations, cities and their inhabitants, politicians and their constituents, and humans and their environment.

May each of you enjoy a Merry Christmas, Happy Yuletide, Serene Solstice, and Prosperous New Year.

[Kate Braun‘s website is www.tarotbykatebraun.com. She can be reached at kate_braun2000@yahoo.com. Read more of Kate Braun’s writing on The Rag Blog.]