KBR and the Army : Rewarding Incompetence and Scandal 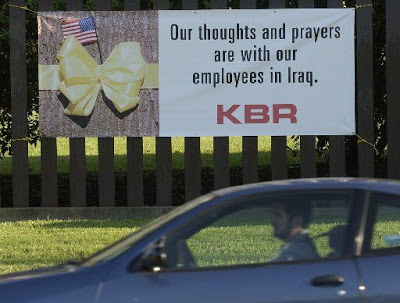 It looks like the United States Army is incapable of learning from past mistakes. On Tuesday, the Army awarded defense giant KBR (once an affiliate of Halliburton) a new contract for support work in Iraq. The contract could be worth as much as $2.8 billion for the Houston-based company.

KBR was quick to jump on the new contract saying, “The award demonstrates that the government recognizes KBR’s ability and expertise in delivering high quality service in challenging contingency environments.” Despite their bragging, the record shows that KBR has definitely NOT shown “ability and expertise” in its Iraqi operations. Let me remind you of just a few of KBR’s screw-ups in Iraq.

First, consider the death of Staff Sgt. Ryan Maseth, a 24 year-old Green Beret. Maseth was electrocuted while taking a shower in 2008. It turned out that his death was due to faulty electrical work done by KBR. An investigation then found 17 other deaths due to faulty electrical work, most of it done by KBR. The company was denied $25 million in awards for this shoddy work.

But this was not all. Earlier, it was discovered that KBR had been selling the Army contaminated water. The water caused our soldiers to experience skin abscesses, cellulitis, skin infections, diarrhea, and other illnesses. Instead of fixing the problem, KBR covered it up and continued selling the contaminated water to the Army for THREE YEARS (from January 2004 through December 2006).

And it goes on. In 2005, a young woman named Jamie Leigh Jones was working for KBR in Iraq when she was raped by several male employees of KBR. Did KBR report this to the proper authorities? Of course not! When the young woman tried to go to authorities, they had her kidnapped and held in a shipping container with no food, water or medical help.

Thank goodness there was a single KBR employee with a shred of a conscience who allowed her to use his cell phone. She called her father in the United States, who then called Houston Rep. Ted Poe. Poe contacted the State Department and demanded her release. The State Department sent investigators, who rescued Ms. Jones and got her medical help.

Ms. Jones sued KBR, and instead of doing the right thing, the company is fighting the case tooth-and-nail. They even tried to get the case thrown out of court, claiming that her contract with the company denied her the right to file suit. Fortunately, the court did not buy this feeble argument and ruled she had the right to sue.

These are just some of the more well-known examples of KBR demonstrating its “ability and expertise” in Iraq. I’m sure there are more. KBR has not only not shown a level of excellence, it has not even shown a basic level of competence in Iraq. They have also shown they care little about our soldiers or even about their own employees.

But the company did make billions of dollars from the Iraqi war, and now it stands to make billions more. How can the Army reward this incompetence with a new multi-billion dollar contract? Even the dumbest individuals know better than to touch a stove a second time, after being burned the first time. Why can’t the Army learn from its past mistakes?

There are those who think our government is broken. Things like this make me think they could be right.

4 Responses to KBR and the Army : Rewarding Incompetence and Scandal