Keith Joseph : Communication on the Left Must Embrace the New Technology 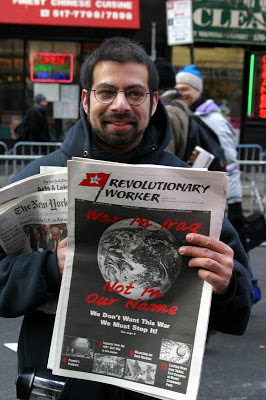 One of the great curiosities of the revolutionary left is the newspaper hawker. At every protest, at every progressive gathering, at every radical conference they appear. Trotskyites outside (they are never invited inside — apparently they have no manners) with insufferable papers like “The Workers Vanguard,” or “The Militant.” Inside old “new left” Maoists, and their unwitting youthful acolytes, push the latest edition of the “Revolutionary Worker” with insights from their maximum leader. To sell these papers you must be disciplined, you need guts, and a tolerance for abuse—most of the people who you try to sell the paper to refuse it. You must be prepared to hear “no.” I can explain this curiosity—the newspaper hawker and their newspaper — because I was once a newspaper hawker myself.

The newspaper, that marvel of 19th century communication technology, which is today breathing its last gasps under the weight of an unprecedented revolution in communications technology, somehow remains the preferred vehicle for the communication of revolutionary news and analysis by all manner of Marxian sects. Why? Because in an important little essay entitled: “Where to Begin,” and in a follow up pamphlet called: “What is to be done,” V.I. Lenin said a newspaper was necessary to unite the revolutionaries and to organize the impending insurrection. Our modern revolutionaries read Lenin’s essay like a cookbook recipe — what is to be done? Just add water. Lenin’s plan was brilliant in 1901 and we have much to learn from it, but only if we update the plan for the twenty-first century.

First and foremost newspapers are no longer cutting edge communications technology. Secondly, the new technology, most notably the internet, cannot be considered in isolation from new forms of social organization and social space it makes possible. The newspaper and the vanguard party built in the course of writing, editing, publishing, and distributing that newspaper are organizational, communicative, and cultural forms that correspond to one another, and the level of development of the productive forces. In other words, newspapers and top down vanguard parties go together –- but they are completely out-dated forms. So, while plenty of people still read newspapers, we should not use them as organizing tools. To use them today is like using a typewriter instead of word processing, or a television with rabbit ears instead of cable.

Lenin showed — in Where to Begin? and in What is to be done? — that political organization is built around communication technology. He insists that the newspaper is a “collective organizer.” The newspaper, according to Lenin, is supposed to do much more than report the news — the paper is supposed to be a place for revolutionaries to communicate with one another, to explain their practice to one another, to share experiences, and resources, to debate and argue out ideas and analysis — and in this process revolutionary unity is built, revolutionary culture is developed, revolutionary practice begins to become coordinated, and revolutionary organization is built. Most of the sects use their newspaper as self-promotion, they rarely have open discussions and certainly never discuss their practice in a serious way so that it can be critiqued and improved upon. They are more interested in maintaining their little sects as small businesses that can fund the careers of a few so-called leaders.

How can we put Lenin’s plan into effect with modern communication technology and organizational forms? Lenin called for a single newspaper to unite all the small local groups. Today we have a similar problem. We have numerous small local groups and numerous single issue organizations but no way of coordinating activity and experiences while remaining democratic and retaining bottom up structures. We need to learn to use the web as a collective organizer.

Just as the vanguard party and newspaper go together the internet and radical democracy go together. Before the internet organizational democracy was more of an ethical principle than a vital necessity. Before the internet democracy was a drag on expediency, but with the new communication technology openness and democracy are not just principles they are necessities. Openness and democracy are expedients. If we are to build the movement and organization to transform this society we need the unrestrained and self-directed energy and creativity of the majority of people.

The Obama presidential campaign pointed to the possibilities of the internet. Lincoln was a master of newspaper, FDR was the master of the radio, John Kennedy was the first to master television, and Obama was the first politician to use the internet effectively. But the internet is an inherently revolutionary technology that makes radically democratic participation possible. Obama’s campaign merely scratched the surface. We need a period of conscious experimentation with the various tools of the internet, websites, blogs, twitter, social networking sites to find ways to use the net to build revolutionary democratic organization and concerted practice.

This entry was posted in Rag Bloggers and tagged Grass Roots Organizing, Internet, Networking, Newspapers, The Left. Bookmark the permalink.

7 Responses to Keith Joseph : Communication on the Left Must Embrace the New Technology