Ken Martin : ‘The Austin Bulldog’: Growling at the Powers That Be 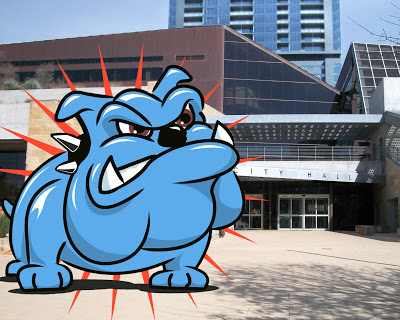 AUSTIN — Even if you’ve never heard of The Austin Bulldog, if you live in Central Texas you have no doubt read about or seen television reports based on the work done by this small local 501(c)(3) nonprofit for investigative reporting.

The Austin Bulldog broke a major story on January 25, 2011, about the organized system of private meetings among the Austin mayor and council members that for years have taken place right before every council meeting. County Attorney David Escamilla announced the same day he would launch an inquiry into whether this longstanding practice of deliberating in private constituted a violation of the Texas Open Meetings Act.

That story started a media feeding frenzy. The Austin American-Statesman and most local television stations quickly jumped in to follow the story and spread it to a wider audience.

The mayor and council members immediately quit participating in these private deliberative sessions and for the first time in many years began holding public work sessions in properly posted open meetings.

That’s reporting that gets results.

The Austin Bulldog followed up by publishing the edited transcripts and unedited audio recordings of exclusive interviews with council members that were conducted before breaking the story. These interviews gave each council member the opportunity to explain when these private meetings started and why they never questioned whether they were appropriate or legal.

Most people in our area have heard of the embarrassing e-mails sent by the mayor and some council members, in which these elected officials insulted citizens and members of their own city staff. These documents came to light only because of The Austin Bulldog’s open records requests, triggering profuse apologies from the offending officeholders. A heaping helping of humble pie has been served up and choked down.

But it took more than an open records request to get all these e-mails. The City of Austin flatly refused, in writing, to provide any e-mails about city business that were sent or received on the council members’ private e-mail accounts.

The Austin Bulldog did not take no for an answer and filed a lawsuit against the mayor, council members, and City of Austin, and filed a related civil complaint with the county attorney. The end result was that those e-mails were made public — not willingly, not voluntarily as some of the press releases issued by the mayor and council members claimed, but because of the lawsuit.

More than that, the City Council on April 7 adopted a resolution saying that e-mails about city business, created or received on their private e-mail accounts, will be promptly forwarded to city servers and be made available upon request under the Texas Public Information Act.

The resolution characterizes this reform as being voluntary. That’s just another effort to paper over the fact that this action never would have been taken had The Austin Bulldog not filed its lawsuit.

The Austin Bulldog’s lawsuit and reporting also exposed the fact that the mayor and council members’ records management systems are in shambles — in large part because their staff members have not taken the training courses that are readily available.

For example, the city permits each official or employee to delete e-mails — without review by anyone to ensure that the deletion does not violate records retention laws. That’s important, because these elected officials are custodians of the records created by their offices and if these records are not properly maintained they will never be available to citizens or media who are entitled to see them in accordance with the Texas Public Information Act.

The city’s response to The Austin Bulldog’s lawsuit was to immediately hold two training sessions that were well attended by these staff members.

To date the City of Austin is now committed to pay three outside attorneys a total of $399,000 to address the city’s problems in complying with the Texas Open Meetings Act, Texas Public Information Act, and Local Government Records Act. The total includes $110,000 solely for The Austin Bulldog’s lawsuit, which seeks nothing more than to force the city to comply with the law.

Attorney Bill Aleshire of Riggs Aleshire and Ray PC represents The Austin Bulldog in this lawsuit, as well as the civil complaint filed with the county attorney, and does so without compensation. Our objective is not to prolong the lawsuit but to make the City of Austin a shining example of open government.

Growling at the powers that be: Austin City Council, 2011.

Big results on a small budget

I launched the Bulldog on April Fool’s Day 2010. I announced at the time that we don’t take ourselves too seriously, but we take our journalism very seriously. And we certainly do.

I’m in my 30th year as a journalist in Austin’s three-county metro area, and I have won a couple of national awards for investigative reporting for projects that resulted in felony convictions. But for the ongoing job of investigative reporting in the public interest, launching The Austin Bulldog is the best work I’ve ever done.

I think we’ve proven beyond a doubt that a small nonprofit for investigative reporting can make a big difference in exposing corruption, incompetence, and systems of decision-making that violate every principal of open and honest government.

The mayor and some council members have said publicly that they are cooperating with the county attorney’s investigation. They have claimed they were voluntarily providing public records. These statements are not entirely true.

Despite the fact that we have four Attorney General opinions that say e-mails about city business sent or received on personal e-mail accounts are public records, the city flatly refused to provide them in response to my open records request, and did not do so until after they were sued by The Austin Bulldog.

I launched The Austin Bulldog with a $25,000 grant from the Knight Foundation and have kept it going with contributions from community supporters.

Your tax-deductible contribution to support and sustain the important investigative reporting being done by The Austin Bulldog will be matched dollar for dollar by this challenge grant. I hope you will help us reach this important goal by adding your name to the growing list of community supporters by contributing now.

[Ken Martin is the founder, editor, and publisher of The Austin Bulldog. You may e-mail him at ken@theaustinbulldog.org.]