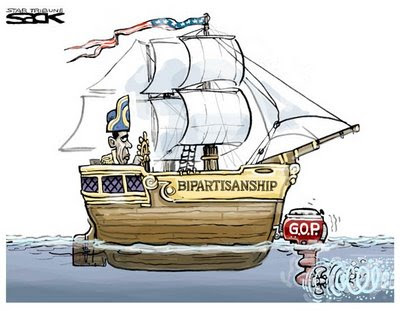 Killing Yourself with Kindness

Despite the lies, the real insecurity that people feel, and the shameless Republican opportunism, health reform will be a loser for Obama and the Democrats unless this president can shake off his delusion that bipartisanship works.

Will somebody please explain to me why Barack Obama is still on his bipartisan kick?

Ever since Obama’s first efforts to reach out to Republicans, with his cabinet appointment of two Republicans, Gates at Defense and LaHood at Transportation, and his appeasement of Republican tax-cutting demands in the stimulus package, the Republican opposition has made it clear that no goodwill gesture, no effort to meet them halfway signals anything other than weakness. They are out to destroy his presidency, pure and simple. Nothing makes this clearer than the battle over health insurance reform.

Even Chuck Grassley, the rank (I mean ranking) Republican on the Senate Finance Committee and the great white hope of bipartisanship for his Democratic buddy Max Baucus, was giving aid and comfort to the Palin “death panel” nonsense. “In House bill there is counseling for end of life,” said Grassley, “And from that standpoint you have every right to fear … we should not have a government program that determines you’re going to pull the plug on grandma.” Maybe it’s time to pull the plug on Grassley.

The White House Chief of Staff, Rahm Emanuel, is said to be a tough guy. And Obama’s top political adviser, David Axelrod, is supposed to be some kind of tactical genius. What do these guys think they are getting by continuing to kiss up to the Republicans?

I don’t buy the claim that making nice got them any more Republican votes for Sonia Sotomayor’s confirmation. The handful of Republicans who supported her were motivated either by demographics of their state or by the fact that a few GOP senators are still willing to approve a highly qualified centrist nominee and didn’t want to alienate women voters. Had Obama been playing hardball on other issues, it would not have fatally damaged Sotomayor.
Today’s op-ed piece “by” Barack Obama in the New York Times was the same old high-minded pabulum. It read as if it had been pureed several times by the speechwriting staff:

The long and vigorous debate about health care that’s been taking place over the past few months is a good thing. It’s what America’s all about.

But let’s make sure that we talk with one another, and not over one another. We are bound to disagree, but let’s disagree over issues that are real, and not wild misrepresentations that bear no resemblance to anything that anyone has actually proposed. This is a complicated and critical issue, and it deserves a serious debate.

That’s great above-politics stuff if you are modeling high school civics, not so great if the other side is going for the jugular — and winning.

Clearly, the administration playbook is to stick to the high road and not take the argument to the other side. But the strategy isn’t working. The approval ratings for both the president and for his health plan are falling. He isn’t even inspiring his own strongest grass roots backers to turn out in numbers at support rallies.

Obama’s own gut instincts seem to be a little better than those of his astonishingly risk-averse advisers. At his own town hall meeting in Portsmouth, New Hampshire August 11, Obama was quite eloquent and detailed on the foolishness of the “death panel” lies, and he also said this:

Every time we come close to passing health insurance reform, the special interests fight back with everything they’ve got. They use their influence. They use their political allies to scare and mislead the American people. They start running ads. This is what they always do.

We can’t let them do it again. Not this time. Not now. (Applause.) Because for all the scare tactics out there, what is truly scary — what is truly risky — is if we do nothing. If we let this moment pass — if we keep the system the way it is right now — we will continue to see 14,000 Americans lose their health insurance every day. Your premiums will continue to skyrocket. They have gone up three times faster than your wages and they will keep on going up.

But, oddly, he didn’t name the “special interests” (like the insurance and drug industry) because they are nominally part of his reform coalition. If anyone is killing somebody with kindness, it’s the insurance industry backing Obama and slyly killing real reform.

Despite the lies, the real insecurity that people feel, and the shameless Republican opportunism, health reform will be a loser for Obama and the Democrats unless this president can shake off his delusion that bipartisanship works. So far, it works mainly to strengthen the far-right and weaken this president and what should be a reform moment.

[Robert Kuttner is co-editor of The American Prospect, a senior fellow at Demos, and author of Obama’s Challenge.]

2 Responses to Killing Yourself with Kindness : Obama’s Bipartisan Kick