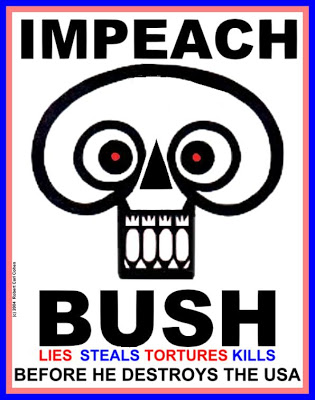 Kucinich to bring single article of impeachment for misleading US into war
By Nick Juliano / July 8, 2008

Rep. Dennis Kucinich (D-OH) is sticking to his drive to impeach President Bush.

Few in the House of Representatives have any intention of doing anything with the last 35 articles of impeachment Kucinich set before them last month, so the former presidential candidate appears to be lightening the load. Kucinich sent a letter to colleagues Tuesday asking them to support a single article of impeachment, to be introduced Thursday, which accuses President Bush of leading the country to war based on lies.

“There can be no greater offense of a Commander in Chief than to misrepresent a cause of war and to send our brave men and women into harm’s way based on those misrepresentations,” Kucinich wrote in the “Dear Colleague” letter.

“There has been a breach of faith between the Commander in Chief and the troops. Iraq had nothing to do with 9/11 or with Al Qaeda’s role in 9/11. Iraq had neither the intention nor the capability of attacking the United States,” he continued. “Iraq did not have weapons of Mass of Destruction. Yet George W. Bush took our troops to war under all of these false assumptions. Given the profound and irreversible consequences to our troops, if his decision was the result of a mistake, he must be impeached. Since his decision was based on lies, impeachment as a remedy falls short, but represents at least some effort on our part to demonstrate our concern about the sacrifices our troops have made.”

To read Kucinich’s letter to his colleagues, go here.

1 Response to Kucinich : OK, Let’s Just Impeach Him on Iraq