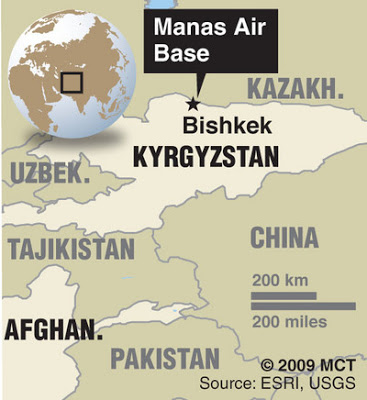 BISHKEK, Kyrgyzstan — The Kyrgyz parliament voted Thursday to force the U.S. military to abandon its air base here — part of what many say is a Kremlin-backed initiative — posing a severe setback to American efforts in Afghanistan.

The vote, a resounding 78-1, signaled that Kyrgyzstan’s government is ready to follow through on its president’s threat to close the Manas Air Base.

Now that the parliament has passed the measure, all that remains is for President Kurmanbek Bakiyev to sign it and his government to issue an eviction notice giving the Americans 180 days to pack up.

Officials at the U.S. Embassy in Bishkek and the air base had no comment Thursday. The embassy recently released a statement that said negotiations were ongoing.

Earlier this month, Bakiyev unveiled his plan to shutter the base during a Moscow news conference just after the Russian government pledged more than $2 billion in loans and aid to his Central Asian country. Russian officials have denied any link between the events, but most observers say that it’s part of the Kremlin’s campaign to reduce U.S. influence in the former Soviet sphere.

One Kyrgyz parliament member seemed to suggest that the small country — with a population of some 5.3 million — would take what it could get.

“Our government has the full right, without explaining anything, to terminate this agreement,” said Alisher Sabirov, a deputy with the president’s party. “Our friends are not those who are stronger, but those who help us.”

More than $1.5 billion of the Russian deal is earmarked for a planned hydroelectric project that Kyrgyz officials hope will not only give them more power at home, but also make them a regional broker.

Communist party leader Iskhak Masaliev remarked to his fellow parliament members that, “I think it’s better to build a hydroelectric plant than an air base.”

While Moscow appears to have blocked the United States in Kyrgyzstan, it’s given a green light for American supplies to transit Russia en route to Afghanistan. Several analysts in Moscow and Washington say that the Kremlin is seeking to balance its concerns about a destabilized Afghanistan — which could mean trouble with its Central Asian neighbors to the south — with a desire to control U.S. moves in the region.

U.S. Defense Secretary Robert Gates on Thursday made the harshest remarks yet by an American official about the Russians’ strategy.

“I think that the Russians are trying to have it both ways with respect to Afghanistan in terms of Manas,” Gates said in comments carried by wire services. “On one hand, you’re making positive noises about working with us in Afghanistan, and on the other hand, you’re working against us in terms of that airfield, which is clearly important to us.”

The air base, just outside the capital of Bishkek, is an integral part of the supply chain of soldiers and equipment to Afghanistan, something made more urgent by President Barack Obama’s plans to increase U.S. forces there by up to 30,000 this year.

Only one parliament deputy spoke up Thursday in favor of keeping the base. Bakyt Beshimov, a senior leader of the Social Democratic Party, said the decision was premature and could make the country more prone to terrorist attacks. No one paid attention.

The vote was largely political theater. Most of the deputies in Kyrgyzstan’s parliament are members of the president’s party, Ak Jol, or “bright path.” They spent the afternoon making speeches haranguing the U.S. military presence and asking Foreign Minister Kadyrbek Sarbayev, a Bakiyev loyalist, to further explain the damage that the air base had done to the country.

Bakiyev, who came to power during the 2005 U.S.-backed Tulip Revolution, appeared briefly, sitting to the side by himself in front of a large TV screen and flag. He congratulated the parliament for “working very effectively.”

Before the session began in earnest, the parliament’s vice speaker went through a didactic exchange with the foreign minister to assure the audience that the government wasn’t abandoning ties with the United States.

“Will we be turning our backs on democracy?” Cholpon Baekova asked.

Sarbayev answered that “Having democracy in Kyrgyzstan is the result of having a close relationship with the United States.” With Thursday’s vote, he said, “we are talking about our national interests.”

Sarbayev also repeated the litany of complaints, chief among them the 2006 shooting death of a Kyrgyz driver at the base. American military officials said at the time that a soldier had shot the driver because he had a knife in his hand.

Recent comments by U.S. officials indicated that they were hoping Bakiyev’s stance was just brinksmanship designed to hike up the rent.

Earlier this month, the U.S. spokesman in Afghanistan told the Associated Press that “I think it’s political positioning. . . . We have a standing contract and they’re making millions off our presence there.”

The spokesman, Col. Greg Julian, pointed to the fact that Gen. David Petraeus, the commander of the U.S. Central Command, had just been in Bishkek.

When Petraeus was asked in a January news conference in Bishkek about reports that the government wanted to shut down the air base, he brushed the question aside, saying he’d received high-level assurances that that wasn’t the case.

“It could be that there’s a little bit of Central Asia negotiating going on here through the press,” he said.

If so, most agree, it looks like the negotiations got a lot rougher Thursday.

This entry was posted in RagBlog and tagged Afghanistan, U.S. Military. Bookmark the permalink.