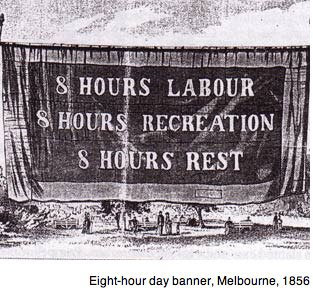 Labor Day 2008 marks a moment of crisis for middle and working-class Americans. Housing, health care, transportation, education and job needs are growing acute in an economy that has been run into a ditch. If you have been paying any attention at all for the last eight years, you know what I’m talking about. Yet 2008 also may be a time of significant change. People are fed up and many are demanding a new direction.

However, really changing the American economy is a long-term project and it revolves around improving the conditions of American workers. Furthermore, whether things get better and incomes go up in the months to come depends a great deal on whether workers are able to organize unions. In a recent opinion survey by Peter D. Hart Associates, 65 percent supported unions while only 25 percent did not. That is no surprise: by one research estimate, unionized workers earn 30% higher wages, are 59% more likely to have employer-provided health insurance, and are 400% more likely to have pensions than their non-union counterparts. Unionized workers have more rights than those without unions, and a union still remains the best anti-poverty program for a wage earner, as Martin Luther King once said.

In Washington State, New York and a few other places, nearly 20 percent of workers belong to unions. But nationally, less than 12 percent do and in the South and parts of the west the percentages are much lower. If statistics show that workers want unions and that unions improve their conditions, why do so many not have them?

In many work places, employees simply do not have the freedom to choose. Employers blatantly disregard their First Amendment rights to speak, associate, and organize. The National Labor Relations Board, stacked against unions by the Bush administration, admits that at least a fifth of those who try to join a union get fired instead. The actual percentage is much higher. Amnesty International and Human Rights Watch designate the land of the brave and the home of the free as one of the greatest violators of workers rights. American workers are not free.

This summer, federal agents in Smithfield, North Carolina, slowed a campaign to organize a union of African-American, Anglo and Latino packinghouse workers with deportation raids. Across the land, deportations turned into felony proceedings, imprisoning workers and smashing union organizing in the process.

Many of us have seen the full-page ads employer groups place in newspapers falsely blaming unions for America’s huge job losses (half a million in the last six months). They even mail anti-union literature into the homes of workers when they try to organize, while employers curse and run union representatives off job sites. Employers systematically break federal labor laws to put unions out of business.

This summer, Wal-Mart held captive audience meetings warning its employees against voting for Democrats. They said Democrats will support the Employee Free Choice Act (which they will), and claimed EFCA will force them to join a union (which it will not). This is blatantly illegal and underlines the simple fact that we need to strengthen labor laws and their enforcement to stop corporate bullying of employees.

Last year, EFCA passed in the House of Representatives but Republicans prevented a vote in the Senate. It allows workers to form unions through majority sign-up rather than through elections procedures that take years and have become a travesty as employers hold captive audience meetings to pressure workers into voting against unions. EFCA shields workers from such practices. It increases penalties for illegal employer actions, and creates mechanisms for binding arbitration for first collective bargaining contracts when employers refuse to bargain in good faith or the parties can’t reach an agreement.

The U.S. Chamber of Commerce has made defeat of EFCA in the next Congress a top legislative priority. In contrast, union supporters are signing millions of post cards and circulating a national petition to support EFCA in the next Congress. It is no surprise that unions want to elect Senator Barack Obama, who co-sponsored EFCA, and defeat Senator John McCain, who voted against. As they battle it out for President, employee freedom of choice hangs in the balance.

Employee free choice and union growth offer the most direct path to reduce the monstrous economic disparities between the great majority of wage and salary earners and the top 1 percent of the population, which owns more wealth than 90 percent of Americans combined. Unions are also important if we are to rejuvenate progressive politics in America. As Stewart Acuff and Sheldon Friedman recently wrote in the Huffington Post, “Social security, civil rights, women’s rights, progressive taxation, high-quality public education and health care for all are but a small sample of the national policies that cannot be defended or implemented without a strong labor movement.”

This Labor Day 2008 is a critical time that holds the possibility for sweeping political and economic change. Vote like the future of working-class and middle-class America depends upon it, because it does.

[Michael Honey is Haley Professor of the Humanities at the University of Washington, Tacoma, and a former holder of the Harry Bridges labor studies chair at the University of Washington. His recent book, Going Down Jericho Road: The Memphis Strike, Martin Luther King’s Last Campaign, recently won the Robert F. Kennedy Book Award. He is President of the national Labor and Working-Class History Association.]

This entry was posted in RagBlog and tagged Labor, Labor History. Bookmark the permalink.