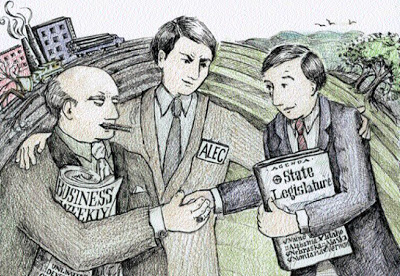 Graphic from alecwatch.org.
The ALEC agenda:
How the right-wing molds
legislators to shill for corporations

“[Any law proposed by businessmen] ought always to be listened to with great precaution… It comes from an order of men, whose interest is never exactly the same with that of the public, who have generally an interest to deceive and even to oppress the public, and who accordingly have, upon many occasions, both deceived and oppressed it.” — Adam Smith in Wealth of Nations

In 1973, a group of state legislators from around the country met with some right-wing ideologues to form the American Legislative Exchange Council (ALEC) to promote policies favorable to limited government, free markets, federalism, and individual liberty, as they understood these concepts.

These are the same concepts that underlie the neoconservative and libertarian agenda that has become well known recently in Wisconsin and Ohio, and which permeate the actions of legislators throughout the U.S., including in the Congress.

One of the key founders of ALEC was Paul Weyrich, co-founder of the right-wing think tank Heritage Foundation, promoter of direct mail fundraising for right-wing causes, and the first right-winger to cultivate and recruit evangelical activists to support social conservative causes.

With Jerry Falwell, Weyrich founded the Moral Majority, a name he invented. Weyrich was one of the key right-wing leaders who worked to develop conservatism into the powerful force it is today after the defeat of Barry Goldwater in 1964 and the disappointment with Richard Nixon’s too-moderate presidency.

But Weyrich, who died in 2008, would not support Goldwater or Nixon were they alive today. They were too moderate for Weyrich’s tastes.

In the late 1980’s, ALEC saw an opportunity to move beyond policy and education by producing model legislation to promote its right-wing, pro-corporate agenda. ALEC organized itself into a number of task forces to write and promote legislation in many areas of public life. It describes itself this way:

For more than 35 years, ALEC has been the ideal means of creating and delivering public policy ideas aimed at protecting and expanding our free society. Thanks to ALEC’s membership, the duly elected leaders of their state legislatures, Jeffersonian principles advise and inform legislative action across the country.

Literally hundreds of dedicated ALEC members have worked together to create, develop, introduce and guide to enactment many of the cutting-edge, conservative policies that have now become the law in the states. The strategic knowledge and training ALEC members have received over the years has been integral to these victories.

This description is not an exaggeration. ALEC task forces have broad mandates in the areas of Civil Justice; Commerce, Insurance, and Economic Development; Communications and Technology; Education; Energy, Environment, and Agriculture; Health and Human Services; International Relations; Public Safety and Elections; and Tax and Fiscal Policy.

ALEC is funded largely by corporations and corporate leaders, so it should come as no surprise that its model legislation benefits corporate interests to the exclusion of the public interest. As Progress Texas, a membership organization focused on holding elected officials responsible to the people, explains:

ALEC is made of more than 300 corporate and 2,000 legislative members who work behind closed doors to approve “model” legislation designed to increase corporate profits at public expense. These corporate-approved bills are then introduced in states like Texas, where lobbyists of many of those same corporations also write checks donating to the political campaigns of lawmakers who advance their agenda in the Texas Legislature. The typical cycle is as follows:

More than 80% of the corporate representatives on ALEC’s board are lobbyists for corporations, such as Altria/Phillip Morris USA, Bayer, Corrections Corporation of America, ExxonMobil, GlaxoSmithKline, Humana, Johnson & Johnson, Koch Industries, Reynolds, State Farm, United Healthcare, and Wal-Mart. Around 200 pieces of legislation initiated by ALEC are passed into law each year in legislatures around the country. 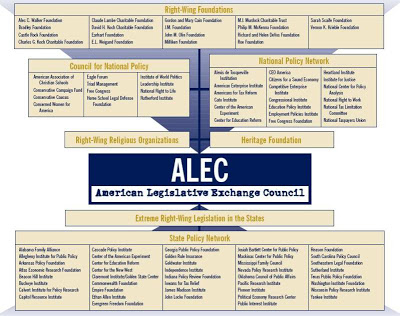 ALEC chart from Daily Kos.
At least one house of the Texas Legislature in 2011 approved ALEC-model bills that were vetted and endorsed by a small number of corporations, including the photo ID bill, the women’s sonogram bill, and the sanctuary cities bill (which would have denied state funds to local governments that prohibit peace officers and employees of special districts from inquiring into the status of a person arrested or detained for the investigation of crime).

legislative leadership is comprised almost entirely of Republicans and also corporations, and ALEC receives 98% of its funding from corporations, foundations, and sources other than legislative (membership) dues. ALEC corporations and their corporate representatives will give money to state legislators, in one of three ways: directly to candidates, to statewide ballot campaigns, and/or directly to Republican committees. In the past 20 years, ALEC corporations or their employees have donated $228.3 million to campaigns, $202.1 million to candidates, and an additional $85.8 million to Republican Party committees, totaling $516.2 million.

To find out which legislators and corporations are involved with influencing and funding legislators in your state, go to the ALEC Exposed website. ALEC Exposed is a project of the Center for Media and Democracy, a non-profit investigative reporting group that focuses on “exposing corporate spin and government propaganda.”

At the ALEC Exposed website, you can learn how ALEC plans to undermine public school systems throughout the U.S. by turning them over to corporations, to limit your legal right to seek damages for injuries caused by corporations, to turn government-run prisons into private prisons, to limit access to the ballot box by ordinary citizens, to dismiss the effects of second-hand smoke on non-smokers and block anti-tobacco laws, to limit the ability of states to raise or collect taxes, to limit the ability of public-sector workers to organize together to improve worker benefits, to create new give-aways to big business, to give tax breaks to the wealthiest Americans, to undermine environmental protections, to limit the ability of local governments to manage land use, to further distort the harshness of the criminal justice system by incarcerating more people for longer sentences, and a host of other legislation that will fatten corporate coffers and diminish the lives of ordinary citizens.

Although ALEC has built itself into a powerful tool of right-wing and corporate interests for nearly 40 years, its influence can be combated if people are aware of its largely hidden activities. ALEC Exposed helps ordinary citizens become aware of ALEC activities and provides the knowledge needed to combat its influence on our lives.