Lamar W. Hankins : Alzheimer’s and Another Face of Elder Abuse 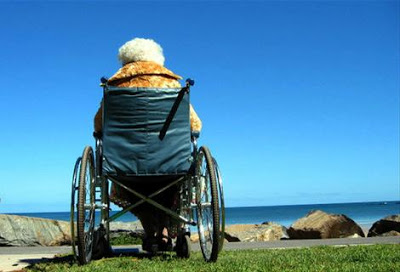 Image from In Good Feather.
Elder abuse is a complicated matter:
Dementia and the issue of passive restraint

During my visits with Dad at the group home, I witnessed several people with Alzheimer’s harm themselves because they did not have adequate passive assistance devices.

The Senate Special Committee on Aging this past week held hearings titled “Justice for All: Ending Elder Abuse, Neglect and Financial Exploitation.” The hearings were stimulated in large part by a Government Accounting Office (GAO) report that identified elder abuse — physical, economic, and psychological — in just over 14% of the elder population living in the community, rather than in institutions.

The GAO report defined neglect as “refusal or failure to fulfill a person’s obligations or duties to an older adult.” Specifically, the report provides that neglect means “refusing or failing to provide an older adult with such necessities as food, water, clothing, shelter, personal hygiene, medicine, comfort, personal safety, and other essentials.”

While honoring obligations to older adults can be a challenge, whether in the community or in institutions, those obligations are particularly challenging when the older adult has cognitive incapacities. I use as an example my father, who died recently at the age of 94, after living and declining with Alzheimer’s Disease for 15 years.

The most prominent and widely-recognized characteristic of Alzheimer’s is the loss of memory for recent events or knowledge that once seemed almost in-born. My father spent 44 years as a machinist. It was from him that I learned about tools, automobile maintenance, and general repairs.

After he retired, he fixed a small lock for a roll-up closure on a Hoosier chest we own. The lock had been broken and he fashioned the missing part on his lathe. I admired his skill. His ability to use algorithms and other complex math always amazed me, especially because he completed only one semester of college before learning the machinist trade and spending all of his working life at The Texas Company (which became Texaco and then Chevron).

About 16 years ago, I was installing a handicapped toilet for my mother at their home and he was helping me. I asked him to hand me the crescent wrench and he was unable to make the distinction between a crescent wrench and an open box wrench, tools he had spent a life working with, and that he had taught me how to use.

That was when I first felt that something was wrong. Mother confirmed that there had been other signs of a cognitive problem. Eventually, he was diagnosed with Alzheimer’s and prescribed various medicines that seemed to slow his decline. When my mother’s abilities started waning and Dad’s disease was clearly advancing, my parents asked if they could move in with us.

Just over two years later, mother died. Ten days later dad tripped over his own feet, breaking his left hip. Until then, despite all the reading I had done about Alzheimer’s, I had not known that walking and balance could become a special problem for Alzheimer’s patients.

As the brain becomes more and more affected by Alzheimer’s, the functions controlled by the brain diminish or simply disappear. After his hip surgery and rehab, we established elaborate precautions to prevent him from having another fall. He could walk on a walker only with a wide web belt (commonly called a gait belt or transfer belt) around his chest held by someone to keep him from falling should his feet become tangled up.

When he was in a wheel chair, a seat belt connected to an alarm would alert a caregiver that he had unbuckled it and was about to stand up and someone could assist him. One morning, a caregiver failed to activate the alarm when the seat belt was fastened. After she left the breakfast table for a moment, dad got up to get some milk from the refrigerator, not remembering that he could not walk safely without assistance. He fell and broke his right hip.

For the next year or so that he lived with us, we established simple, but thorough protocols to prevent another fall. Whoever came into our home to assist him was educated about the need always to follow the established protocols. There was a bed alarm, a chair alarm, and the wheelchair seat belt alarm. All of the alarms kept him from another damaging fall.

When an Alzheimer’s Group Home opened in our town and the expenses of home care exceeded the cost of the group home, we moved him to the group home where he lived with a dozen or so other, mostly Alzheimer’s, patients. All of the protocols we had established at our home were put in place at the group home, but we had to get a written order from a physician for the seat belt alarm because the facility’s manager believed that the seat belt was a restraint. Under state rules, it is not.

The Texas Department of Aging and Disability Services provided me with the official definition of a restraint: “Restraints (physical) — Any manual method, or physical or mechanical device, material or equipment attached, or adjacent to the resident’s body, that the individual cannot remove easily which restricts freedom of movement or normal access to one’s body.” Dad often released the seat belt, the alarm sounded, and someone was able to assist him before he stood up and fell.

During my visits with Dad for the 20 months he lived at the group home, I witnessed several people for whom Alzheimer’s was a dangerous condition that caused them to harm themselves because they did not have adequate passive assistance devices.

I saw people lurch out of their chairs and smash their faces on the floor, requiring trips to the emergency room or hospitalization. I saw others who had become so unstable that they could not walk unassisted, yet they had no protections other than the alertness of a sometimes overburdened staff to keep them from falling and hurting themselves.

Dad had been receiving hospice services for more than two years before his death. A few months before he died, the hospice nurse had recommended that I find a nursing home that would better meet his increasing needs for more nursing care. I started looking around for an appropriate nursing facility. I was pleased that several new nursing homes had opened within 15 miles of our home.

What I found when I visited most of these facilities was that they prided themselves in being “restraint-free.” To them, in spite of the regulatory definition of restraint, the seat belt was a restraint. Several refused admission for him if he kept the seat belt on his wheel chair.

I explained to all that the seat belt was necessary to prevent him from harming himself because he could not remember that he was unable to walk unassisted — an effect of the Alzheimer’s Disease. When he removed the belt, the alarm alerted staff to assist him so that he did not stand up, fall, and hurt himself.

Two weeks before his death, I contacted two legal groups that litigate on behalf of the disabled. I intended to sue any facility that would not accept him because of his disability, which necessitated the use of a seat belt alarm system to protect him.

Dad died before we arranged for him to move to a nursing facility, so the principle for which I was prepared to fight on his behalf was not satisfactorily resolved. Nevertheless, at the time of his death he had been accepted, seat belt and all, by at least two nursing facilities.

All nursing facilities should be required to recognize the special needs of Alzheimer’s and other dementia patients and adjust their procedures to the needs of such patients. No one should be restrained without medical necessity, but when protective assists are needed, no definition or public relations concept — such as “we are a restraint-free facility” — should be used to prevent needed care.

Disability advocates should broaden their views, and all medical agents should be prepared to take whatever actions are necessary to protect those to whom they have a legal and moral obligation. Otherwise, our system of advance directives is meaningless, and disability rights is farcical.

Elder abuse takes many forms, as testimony before the Senate Special Committee on Aging has shown. But financial exploitation, physical neglect, and psychological mistreatment are not its only manifestations. The lack of attention to the special needs of Alzheimer’s patients and others with cognitive disabilities must be considered realistically and identified clearly as another form of elder abuse deserving resolution.

We have legal and moral responsibilities to all of the elderly to make sure that our institutions that serve them satisfy their obligations of appropriate care.