Lamar W. Hankins : Are Bush and Perry Birds of a Feather? 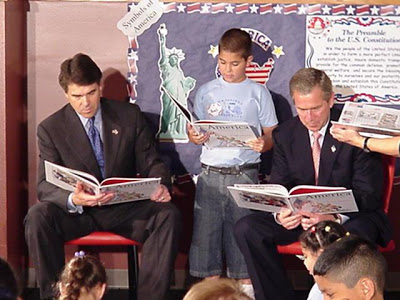 What did you learn in school today? Dubya and Perry read to school children. Image from Addicting Info.
If you liked George W.,
you’ll love Rick Perry

For those who try to live fact-based lives, George W. Bush was a challenge to listen to without talking back to the television or radio. He always had difficulty with the English language. Some say he has some form of dyslexia, but it wasn’t his inability to find the right words that was the problem. It was his willingness to tell lies with abandon.

Even today, George W. is unapologetic for the whoppers he told about the fictitious Iraqi WMDs, the yellow-cake uranium from Niger, the portable chemical weapons labs, and the nonexistent connections of Saddam Hussein to 9/11.

Rick Perry engages in the same abandonment of truth — on steroids. Among his campaign statements, we have his hint that the secession of Texas from the Union might be a workable idea, that Social Security is a Ponzi scheme and a monstrous lie to young people, that the health reform of 2010 is socialism, and that those who believe in separation of the state from religion are trying to sanitize our civic speech.

As I address each of these Perry fallacies, I am aware of what scientists call confirmation bias. This is the tendency of all people — including me — to recognize and accept only information or facts that confirm our preconceived views. Nevertheless, I hope that my debunking of Perry’s falsehoods will be considered on their merits, not discarded without reason based on the reader’s confirmation bias.

Perry tried to connect with some Tea Partiers last year by seeming to agree that Texas’ secession from the Union was possible because we reserved that right when we joined the Union in 1845. The truth is that Texas has the right to become five states if it so chooses. According to the Texas State Library and Archives Commission, the original federal resolution admitting Texas as part of the United States “stated that Texas would retain its right to divide into four states in addition to the original Texas. … [T]he legal right to do so still remains!”

This is a “one-time-option of dividing,” but it is not a reservation found in any Texas document, but in the federal resolution, and it does not involve secession. Perry may have his Texas history a bit confused for political effect, or he may just like to make up stories to give the impression that he might really shake things up if given the chance.

If Texas did divide into five states, we would have eight more senators in Washington and four more governors. But on the chance they would all be like the ones we have now, dividing doesn’t seem like such a swell idea.

The secession issue may excite Tea Partiers, but Perry’s Social Security statements seem intended to foment fear in young people and appeal to that ideological bugaboo socialism, the scourge right-wing politicians and talk-show hosts like to link to commie sympathizers.

Social Security wasn’t popular in the early years of my parents’ generation. My dad told me how mad it made him when payroll taxes were first deducted from his paycheck when he worked at the Texaco refinery in 1937. Back then he paid about $1.25 a month into the Social Security system. When he retired at age 62 in 1979, he received about $300 a month in Social Security benefits.

By the time he died earlier in 2011, his monthly Social Security payment was over $1300, but included just under $100 in deductions for Medicare payments. Based on this reality, Social Security should not be seen as a retirement program, but as a supplemental income program that helps support seniors in their retirement, and disabled workers.

Without Social Security, nearly half of the elderly would be living in poverty according to data compiled two years ago by the Center on Budget and Policy Priorities.

In 1983, Congress passed some Social Security reforms that have accumulated a current surplus of $2.6 trillion, all of which was used to purchase treasury notes so that Congress could spend the money on other things. The Social Security Trust Fund has become a repository for IOUs from the federal treasury.

Despite this Congressional sleight-of-hand with Social Security funds, the federal government is obligated to pay Social Security benefits and it will do so from the accumulated treasury notes, which are enough to pay all benefits through 2037. After that date, Social Security revenues are expected to be sufficient to pay about 80% of benefit entitlements.

A few adjustments to the system will assure its solvency at full benefit levels for at least the next 75 years. Projections beyond then are not actuarially sound.

Perry’s fear-mongering to young people that they are being defrauded by the federal government concerning Social Security is true only in the sense that Congress recklessly spent Social Security funds, giving the Social Security Trust Fund IOUs in exchange. But there should be no doubt that the government is obligated to continue to make good on all of these funds when they are needed.

The long-term solvency of the Social Security system should not be in question, but Perry wants all of us, especially young people, to believe otherwise.

The same is true of Social Security, which may need some improvements and reforms, and we can debate and discuss the best way to organize and manage a supplemental retirement program, but that is not what Perry is doing. He is falsely characterizing Social Security in an attempt to scare people into believing that they will not receive a fair amount of benefits when it is time for them to participate in the program. There are no reasons to believe such lies.

With respect to the 2010 health reform legislation — the Patient Protection and Affordable Care Act (PPACA) — Perry rhetoric turns to calling it Obamacare and claiming that it is a socialist program. The Act was written by the private, profit-making health insurance companies for the financial benefit of those companies. This has been a complaint of many people about the Act, especially those who favor a taxpayer-funded health insurance program that provides universal access to the private health care system.

The PPACA is not based on a socialist idea, but an idea grounded in mutual need. It is little different from the federal or state highway programs. Those programs build and maintain roadways for all Americans to enjoy. Some people use those roadways more than others do, but most Americans and American businesses need them, just as most Americans need access to health care.

A socialist health care program would be one in which the government owns health service buildings and hires the health care providers, as it does for veterans and members of Congress who use government-owned hospitals and clinics. Once again, Perry chooses to mischaracterize the basic nature of the PPACA for his political benefit.

When it comes to Perry’s claim that there are groups and individuals who are trying to keep some people from uttering God’s name in public at civic affairs, he is once again trying to get us to miss seeing the forest by focusing on the trees. It is the same kind of deception used by magicians and illusionists to fool people.

I have written many times that under our system of government, public officials have no business under the Constitution using their offices or the power of government to promote or advance their religious views or religion in general.

Our founders and the Constitution they wrote created a secular government that not only prohibits that government from creating an establishment of religion, but also eschews any religious test for public office. The place for practicing religion is not at governmental meetings and events, but in other forums of a person’s choosing.

Perry — who has always struck me as the cloned child of the televangelists James Robison and Pat Robertson — wants to force his religious views on all of us through his elected position as a government official. If he becomes president, he will try to have us all genuflect to his God. And since his God does not answer his prayers for rain, why bother to promote such religious activity?

The answer, of course, is that Perry believes that public religious piety practiced by the head of Texas government and by a candidate for the presidency will curry favor with a segment of the electorate that forms his base. Nothing is more cynical or crass — perhaps even un-Christian. But it worked for George W.

1 Response to Lamar W. Hankins : Are Bush and Perry Birds of a Feather?