Lamar W. Hankins : Ayn Rand and the Sophistry of the Libertarians 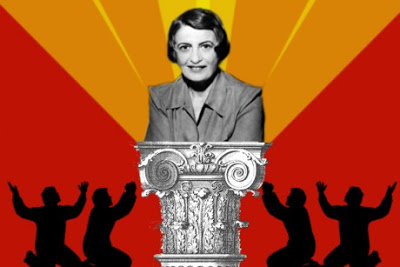 Art from Salon.
The sophistry of Ayn Rand libertarians

In 1964, I roomed with Wally. Wally had discovered Ayn Rand and talked frequently about rugged individualism — his desire to be left alone by the state, by institutions, and by others to follow his own path. Wally thought no one should tell him what to do.

That entire semester, Wally probably missed 90% of his college classes. After all, he wanted his liberty. Needless to say, his grades suffered, but we had some fascinating discussions about philosophy and the socioeconomic condition of the U.S., a subject about which Wally took no responsibility. After all, each person is responsible for his or her own condition, created by his or her own choices.

If this sounds vaguely familiar, it is echoed in the callousness of the current Republican presidential campaign, where Herman Cain states that if a person doesn’t have a job, it is that person’s fault; where Ron Paul suggests that if a person needs health care but has chosen not to purchase health insurance, then it is perfectly acceptable to let that person die.

Where all undocumented immigrants should be immediately shipped back to their country of origin, and electrified, military-guarded fences should be erected to assure that they cannot return; where the crowd applauds all of Gov. Perry’s executions, even if some of those executed were innocent; where waterboarding is torture that makes Republicans feel good (they like to call it “enhanced interrogation”); where gay servicemen are booed; and where “no work, no food” is an honored value.

It’s chilling: even George W. Bush claimed to have compassion, but Tea-party-leaning, Ayn Rand-spouting Libertarians have none.

Rooming with Wally was my introduction to libertarianism. If that had been the end of my study of libertarianism, I would have a more jaundiced view than I now have of the philosophical underpinnings of that philosophy.

Now, over 45 years later, libertarianism is widely discussed and mentioned in conversation. We have some politicians who claim to be Libertarians. Many freethinkers call themselves libertarians — comedian Bill Maher, illusionist Penn Jillet, biologist P. Z. Myers, and others. I often agree with some libertarian ideas, but I’ve come to realize that there is a fatal flaw in Ayn Rand libertarian philosophy.

To say that someone is a libertarian is about as useful as saying that a person is religious. There may be as many varieties of libertarianism as there are religions in the U.S. Lately, though, many in the political class identify themselves as Any Rand libertarians, so I will focus on their brand of libertarianism.

After all, it is the kind extolled by Paul Ryan, Rand Paul, Ron Paul, Clarence Thomas, Rush Limbaugh, Glenn Beck, and most of this year’s crop of Republican presidential hopefuls, though I don’t claim that any of them follow Ayn Rand’s philosophy (Objectivism) in any systematic way.

Ayn Rand extolled the virtues of individualism, sometimes called rugged individualism, as a lynchpin of her beliefs. Individualists are glorified as ambitious, fiercely independent people who succeed spectacularly in life solely because of their own actions, resources, intellects, and willpower.

In Ayn Rand’s world, the masses of people don’t fit this description. They are largely miserable souls who occasionally overcome their misery thanks to the exceptional abilities of a few individualists, who do great things because of their creativity and intellectual acumen.

If this is your view, your reality is not the same as mine. When I look at society in the U.S., I see opportunities for many people made possible by the collective actions of us all — a system based on an implicit social contract that has created public education, infrastructure, modern utilities, water resources on which all life depends, organized social and economic systems that, however flawed, make possible success for the great masses of our people.

Rand’s idea that those who succeed do so because of their individualist qualities that make them some sort of supermen is a dishonest analysis of how our society works. One has to have blinders not to see the importance of the cooperative spirit that pervades America.

For the most part, libertarians don’t like the fact that governments are created by people to secure for everyone the basic rights of equality and a multitude of other rights — life, liberty, and the pursuit of happiness — which were further explained and expanded in the Bill of Rights.

But Ayn Rand and her current libertarian followers nowhere acknowledge the truth written by W. E. B DuBois 55 years ago: “We let men take wealth which is not theirs; if the seizure is ‘legal’ we call it high profits and the profiteers help decide what is legal.” And that has been the failure of our republic for at least the last 30 years. The profiteers have been allowed to write or re-write the rules under which our political and economic system operates.

Governance, as the Occupy movement is arguing, is all about balancing the interests inherent in the social contract and the rights we have so that one group (the “profiteers”) cannot dominate another, a view anathema to the 1% and their defenders, who spend millions to make sure the rules favor them and not the 99%.

The profiteers, using libertarian justifications, help corporations dominate American life to satisfy their quest for greater profits; to enrich the wealthy further, insisting that people pull themselves up by their bootstraps (ignoring the fact that to do so literally means that you land on your backside when you try); to deny the basic need of all people for adequate food, housing, education, and medical care if they are unable to afford those things because they can’t find a job, are unable because of infirmity to hold a job, or are a child in need of nurture and care.

To pass laws like Medicare Part D in a way that enriches the pharmaceutical and insurance industries at the expense of the people and creates greater deficits; to let half the people and many corporations get away with contributing nothing to fund the federal government; to refuse to stabilize Social Security through two simple methods — expand the payroll tax to all earned income, and recover through the tax system most Social Security benefits paid to the wealthy; and to fight wars that do little if anything to protect America, but everything to enrich defense contractors, funding these wars with borrowed money.

The signers of the Declaration believed that laws should be adopted that are “most wholesome and necessary for the public good.” This belief is virtual heresy to most Ayn Rand libertarians, who do not want laws that are for the public good. They want laws that benefit the corporations and the wealthy. They ignore the Constitution, which provides that one of the purposes of our form of government is to “promote the general Welfare.”

One of the most succinct statements in opposition to Ayn Rand’s philosophy came recently from Senatorial candidate Elizabeth Warren at a house party in Massachusetts:

Now look, you built a factory and it turned into something terrific, or a great idea — God bless. Keep a big hunk of it. But part of the underlying social contract is you take a hunk of that and pay forward for the next kid who comes along.

Warren’s message is one well-understood by the Occupy movement, whose members are driven by a profound commitment to democratic principles and to an economic system that will assure a decent life for all, rather than just the 1%.

Ayn Rand viewed the misery of many of the world’s people as a failure of their will. She would not acknowledge that our government, through opportunism, the taking of natural resources, militarism, and exploitation of the labor of third world people, made possible much of our prosperity.

Rand’s philosophy is grounded in selfishness and greed disguised as virtue. The needs of others, including those starving and homeless, are not worth her consideration. As far as Rand was concerned, these weak, defective people could just die.

I value individualism, but within certain boundaries. When I look at the world, I recognize that I have whatever success I have had not as some willful lone ranger operating on my own. I had friends, family, teachers, mentors, opponents, leaders, public servants, and countless others long forgotten who helped me become whatever I have become.

I have never seen anyone else whose life has been otherwise. It takes extreme myopia or mendacity not to see that rugged individualism is a figment of Ayn Rand’s imagination. Not only are her novels fictional, but her entire philosophy is based on a fiction, as well.

1 Response to Lamar W. Hankins : Ayn Rand and the Sophistry of the Libertarians