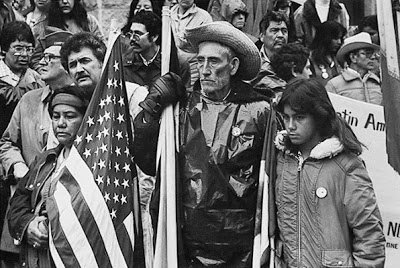 Rio Grande Farm Workers: The Cortez family at the State Capitol in Austin, Texas, 1979. Photo by Alan Pogue.
We are all in this together:
Republican budget-gutting protects the rich

In that year in VISTA, I came to value some who are considered the least among us, those we don’t think about or acknowledge. I decided that to be a moral person meant that I could not ignore the needs of others.

Reading some of the Republican plans for cutting — or gutting — the budget took me back a few years. On the chopping block is the federal program AmeriCorps. It is the program that currently funds VISTA — Volunteers In Service To America.

I was a VISTA volunteer in 1965-66. Along with hundreds of other mostly idealistic young people and a smattering of retired folks as well, VISTA volunteers worked in migrant labor camps, on Indian reservations, and in the inner cities to help poor people improve their lives. I even learned to say “soy miembro de un grupo que se llama VISTA Volunteers.” VISTA was a seminal experience that helped me establish what was important in life.

Working with migrant laborers in south Florida taught me about how incredibly hard their lives are. They live typically in squalid camps provided by growers. They don’t have access to much health care — occasional vaccines provided by county health services and emergency rooms when they are very sick.

It was while taking a migrant worker to the emergency room one evening at a Miami hospital I learned for the first time about gangrene. An injury to his leg, which had been treated earlier, had become so severely infected that gangrene had set in. It took 10 hours to get him help at the emergency room. We returned to his shack in south Dade County as the sun was rising.

Migrant farm workers suffer the effects of prolonged exposure to pesticides, which include neurological damage (especially to children), birth defects, skin diseases, and cancer. Though they work harder than most people, their pay is incredibly low — the median pay is less than $900 per month for a family of four.

Three-fourths of migrant farm workers earn less than $10,000 per year, and 60% earn below the poverty line. They have no job security and must travel constantly to earn their meager pay. They are abused and financially exploited by the growers and crew leaders, who contract directly with the growers in many areas.

When 20 migrant men from Puerto Rico were killed when the bus in which they were riding was hit by a train at a crossing on their way to a migrant labor camp after working in the fields one day, I learned about the avarice of the insurance industry. Within 24 hours, insurance company representatives were in Puerto Rico getting the families of those killed to take $500 checks as payment in full for the lives of their loved ones.

We notified the Puerto Rican Department of Labor, which took action to immediately expel the insurance company representatives from Puerto Rico. It was an example of a government agency acting on behalf of workers, something that has occurred all too infrequently in my experience.

In that year in VISTA, I came to value some who are considered the least among us, those we don’t think about or acknowledge. I decided that to be a moral person meant that I could not ignore the needs of others. It meant also that there had to be a communal responsibility for the welfare of all in our society.

We are all interrelated. We are all in this together, a sort of union of people doing our part to make this society function as well as possible, recognizing the basic human needs of all. While I have failed personally to always honor my values, I have accepted that this is part of the human condition. All we can do is start each day or week or month or year determined to do better.

I can understand why some believe there is no role for the government to help fulfill a communal responsibility to all. They see the world through different lenses. For them, we are not a community, but individuals living near one another. If someone manages to get the upper hand, it is because that person is superior or more deserving. Expressed in its extreme, it comes out as this Ayn Rand idea: “What are your masses but mud to be ground underfoot, fuel to be burned for those who deserve it?”

Migrant farm workers, I learned, are easily ground underfoot, both figuratively and literally. These people who pick most of our fruits and vegetables live miserable lives compared to the American ideal. Growers use them to increase profits. After all, the growers own the agricultural businesses, so who are we to question their management? Our society uses them. After all, those fruits and vegetables won’t get on our dining room tables by magic, and we have to have them to live.

Such views ignore the communal reality that there would be no water to nourish the crops, no roads to get the crops to market, no assurance that the crops are safe to eat, without the communal allocation of adequate water, the building of roads, and the development and enforcement of regulations to protect the health of consumers. Just these three concerns lead to disagreements that must be resolved. Those resolutions are what politics is about.

Unfortunately, we have a significant segment of the population that believes there is no role for government. If you care about the well-being of everyone in this communal system we call the United States, such a position is untenable. To not care is counter to the values on which this country was founded.

The Declaration of Independence and the Constitution are the documents that created a unifying bond among all Americans. Some refer to this bond as the social contract, which most people like when it benefits them. But too many Americans fail to recognize the need to assure that the social contract works for everyone, or ultimately it will fail.

With respect to migrant farm workers, we have abrogated that social contract. Now, all over the nation, governors and legislators are seeking to abrogate it further by denying government workers (and private sector workers, as well) their First Amendment rights of free association through participation in unions to secure their rights to satisfactory working conditions and appropriate compensation and benefits.

As I write, large demonstrations are occurring in Wisconsin. If the government workers in that state, with its long history of support for workers’ rights, fail in their efforts to preserve this basic right, there is little hope for other government workers around the country.

Unions have made a difference in my own life (my father was a union worker) and they have made a difference in scattered instances for farm laborers in the grape fields of California and in the tomato fields of Immokalee, Florida, where the Coalition of Immokalee Workers started the Campaign for Fair Food 10 years ago to improve working conditions and wages for farmworkers, but most such workers remain impoverished, sickened, and abused by their work for growers. Little has changed in the 51 years since Edward R. Murrow’s documentary “Harvest of Shame” revealed the plight of farmworkers in prime time.

Real patriots would be on the side of workers, not their overlords. I learned this lesson 45 years ago as a VISTA Volunteer. That is probably as good a reason as the moneyed interests need to shut down that program. Until workers everywhere start shouting “Viva la huelga!” and Americans support their efforts, there will be no balance in the relations between workers and their exploiters.