Lamar W. Hankins : Darwin Day and Change We Can Believe In 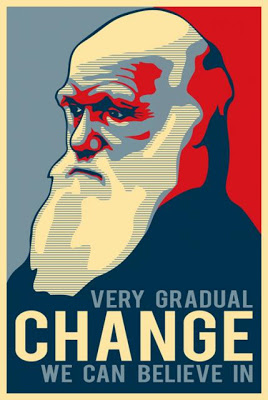 Image from National Center for Science Education.
A solution to the post-Super Bowl blahs:
Darwin Day 2012

If you are having withdrawal from all the excitement of the Super Bowl, or if you just have the winter blahs, there may be a solution on the horizon. You can begin making preparations for Darwin Day 2012, which is scheduled for Sunday, February 12. Darwin Day is a global celebration of science and humanity held annually around the date of Charles Darwin’s birth — February 12, 1809.

I’m sure you will want to participate in the ticker-tape parades held all around the country by entering a grand float in one near you. Great festivals should fill parks everywhere. The public speeches should be edifying. The abundance of food booths and vendors hawking their goods should be satisfying. The early-evening fire works displays should be spectacular. There is only one problem — none of this will happen.

Only 16% of Americans in 2010, according to a Gallup Poll, believe in what it termed naturalistic evolution — Darwin’s theory. It is unlikely that the remaining 84% will be interested in engaging in any celebrations of the great naturalist and scientist Charles Darwin.

Another 30% of Americans, according to Gallup, believe in what it termed Theistic Evolution. That is, “Man has developed over millions of years from less advanced forms of life, but God guided this process, including man’s creation.” Of course, this isn’t exactly Darwin’s theory. A full 40% of Americans believe in creationism — basically, the creation story as told in Genesis — completely devoid of any mention of evolution.

My college experience introduced me to evolution indirectly. The biology courses I took at the Methodist-related college I attended were suppositioned on evolutionary theory as propounded by Charles Darwin, but his name was never mentioned. My two biology teachers were scientists, and they had no doubt about the scientific proof for evolution almost 50 years ago when I started college.

While some people thought the big bang was when I dropped a large tray full of plates and utensils in the dining hall, scientists understood that the big bang referred to the rapid expansion of the universe nearly 14 billion years ago. To understand the Big Bang (termed “The Great Radiance” by writer Philemon Sturges) requires knowledge of cosmology, astronomy, and physics at least.

Since I have no expertise in these fields, I look to the consensus among experts to decide what is true. Without question, there is considerable and, to scientists, convincing scientific evidence to support the Big Bang theory.

But Darwin did not study this theory. He studied nature and developed his own theory about the origin of species. A word about scientific theories might help get over the hump that some people think a theory is just an idea that may or may not be true. But this is how science works: A scientist (usually) proposes a theory to explain some natural phenomenon and then tests that theory. That’s what Darwin and thousands of scientists since the publication of Darwin’s 1859 book On the Origin of Species have done.

By its very nature, science is a field of study and inquiry based on proof and falsification of ideas. The nature of science is to engage subjects based on the truth or falsity of a proposition. The proof for evolution is now overwhelming.

Evolutionary biologists and those in related fields understand that the theory of evolution is indeed proven beyond any reasonable doubt. Since I am not a biologist, I think it is rational to accept the scientific consensus that evolution is true. About 98% of scientists in Texas, according to a 2008 poll, accept evolution to the exclusion of creationism, and 91% believe that evolution is compatible with religious faith.

Although it is impossible to watch human evolution in the span of a lifetime, or even 10,000 lifetimes, there are still ways to see evolution happening in a short span of time. A commonly known adaptation through natural selection is insects that are resistant to DDT and other pesticides. Gardeners and farmers know, also, about other insects that have adapted to other pesticides and pesky plants that have adapted to herbicides.

As evolutionary geneticist Jerry Coyne has pointed out, “fungi, worms, and algae have evolved resistance to heavy metals that have polluted their environment,” allowing them to survive these man-made poisons. Adaptation through natural selection is a part of Darwin’s original theory.

Many who argue against Darwin’s theory point to the fact that we have an incomplete fossil record to show all the developments from one species to another and within one species. Of course, the fossil record is incomplete, for natural reasons. Only species with certain characteristics can be preserved as fossils. And the conditions must be just right for a species to be preserved in sediment that becomes rock over millions of years.

For a fossil to be formed, the dead animal or plant must be in water, sink to the bottom, and be quickly covered by sediment before it decays or is scattered by scavengers. Dead plants and land-dwelling creatures rarely are found on the bottom of such water sources as lakes or oceans. Most fossils, then, are marine organisms.

To form a fossil, the hard parts of the organism become infiltrated or replaced by dissolved minerals, which becomes compressed into rock by an over-burden of sediment. Soft parts of plants and animals aren’t easily fossilized, so many species don’t become fossils.

Species such as worms, jellyfish, bacteria, and delicate creatures such as birds are much rarer to find as fossils, just as land-based species are harder to find than are aquatic species. With 10 million species now on earth and an estimated 17 million to 4 billion that once lived on earth, we will never find fossils of all species that have ever lived. We have found only 250,000 or so different fossil species, an inadequate sample for sure, but enough to figure out how the evolution of species proceeded and how major groups split off from one another.

I don’t know these things because I am a scientist. I accept these views because the overwhelming consensus among all the world’s biological and related scientists supports these propositions. That consensus exists because it is supported by the evidence.

A friend of mine asked me recently to explain evolution in one sentence or short paragraph. I’ll leave that task to Jerry Coyne, who explains the modern theory of evolution with one long sentence:

Life on earth evolved gradually beginning with one primitive species — perhaps a self-replicating molecule — that lived more than 3.5 billion years ago; it then branched out over time, throwing off many new and diverse species; and the mechanism for most (but not all) of evolutionary change is natural selection.

In addition to genetic change over time, usually a great time, mutations develop in response to evolutionary pressures. Such change over time is called gradualism. It may take hundreds of thousands of generations, even millions of generations to develop the distinct species we see today. This development occurs through another concept of evolution termed splitting, or speciation.

A fourth axiom of evolution is common ancestry, which can be determined through fossil evidence or DNA evidence, which Darwin did not have over 100 years ago, when he developed his theory.

The fifth part of Darwin’s theory is natural selection, which does not produce the fittest, as is commonly thought, but produces the fitter — improvements over what came before.

It may help some people understand evolution better to know that the evidence shows that the first organisms on the earth were simple photosynthetic bacteria that were followed 2 billion years later by more complex organisms. About 600 million years ago, simple multicelled organisms developed (including worms, jellyfish, sponges).

Land-based plants and tetrapods appeared about 400 million years ago, and then came amphibians, reptiles, birds, mammals, and insects millions of years later.

Humans appeared on the earth about 7 million years ago. All of the evolution evidence supports the view that humans were and are subject to the same evolutionary processes that affect all other species.

In the same way, “intelligent design theory” or “creationism,” as it was originally called, also is not subject to testing and falsification because it is a faith-based, non-scientific theory. No one can test the belief that God created the earth and all of its inhabitants in six days 10,000 years ago. What we know is that the available empirical evidence establishes that organisms have existed on earth for 3.5 billion years.

Texans polled about evolution have opinions near the same figures as for the country as a whole, though about 25% fewer Texans accept Darwinian evolution. Nearly 1/3 of Texans believe that humans and dinosaurs roamed the earth together, leading the comedian Lewis Black to quip that apparently a significant proportion of people think that “The Flintstones” was a documentary.

Nevertheless, Charles Darwin has helped us, perhaps more than any other scientist, to understand critical facts about the natural world. For this, we should celebrate his achievements. I and many others will be celebrating him in one way or another on Darwin Day 2012 — even in the state of Tennessee, where the Scope’s trial was held.

Some of us will join one another for a meal, which can be fittingly preceded by Philemon Sturges’s singing grace, which acknowledges the essence of evolution, sung to the tune of “We Gather Together”:

We gather together to feast and be joyful
Earth’s bounty is precious for we are all one
So eat with Thanksgiving; this food was once all living
Sing praises to the life that becomes now your own

1 Response to Lamar W. Hankins : Darwin Day and Change We Can Believe In