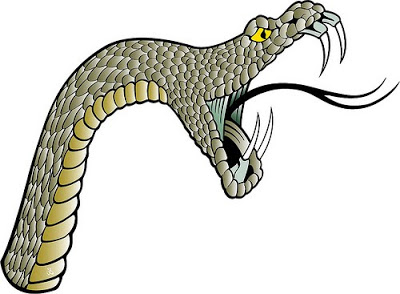 Art from vectorportal.com.
Head of the snake?
Debating the wrong issues
and the wrong bin Laden photos

Without question, Osama bin Laden’s death was well-deserved, but there is more that we should discuss. I have tried to find the right metaphor to describe the role of Osama bin Laden within the criminal enterprise called al Queda. His death is not like cutting off the head of a poisonous snake. The snake’s head is where the fangs are that inject the poisonous venom.

Osama bin Laden did not play that role with al Queda — he did not personally strike at people or targets, though he was a fighter during his Mujahadeen days on behalf of U.S. interests.

The death of bin Laden is much more like the death of the head of an organized crime syndicate. Normally, such a leader does not kill people or personally carry out violence. He makes known what he wants done, and others in the organization plan the work, organize it, give specific orders, collect the illicit funds, or eliminate whomever or whatever target he wants neutralized.

The organized crime metaphor is also fitting because what bin Laden headed was an organized crime operation that we labeled terrorism; but terrorism was not its purpose, it was its major tactic.

Many people experienced in intelligence and terrorism have argued persuasively over the last 10 years that al Queda should be fought with tactics used successfully against organized crime, rather than war, invasion, and occupation. The operation that resulted in bin Laden’s death was more like a sophisticated police raid against a Mafioso than a military operation, though reports indicate that it included mostly specialized military personnel, along with intelligence operatives.

Soon after the Pakistan raid was over and bin Laden’s death was announced, politicians and politicos began debating whether the administration should release photos showing the corpse of bin Laden.

Some argue that releasing the photos would upset Muslims, or at least jihadists, and lead to more retaliation against the U.S.; some suggest that releasing the kill photos would send a clear warning to other jihadists that they can expect the same as bin Laden got. I don’t care about either of these arguments because I don’t care about bin Laden’s corpse. What I want to see are the photos of the raid itself.

The photos of what the Navy Seals saw before bin Laden was killed would help answer many of the serious questions that have been asked about whether this was primarily an effort to kill bin Laden, rather than capture him.

I don’t take this position because I mourn for bin Laden. I don’t. What concerns me is the legality and the effectiveness of what our government is doing to address terrorism. The Seal raid was effective. Most of our other actions for the last 10 years have been less so. Whether it was legal under international and domestic standards is another matter.

Is it a good idea, or legally appropriate, to act unilaterally to send a raiding party into another country? Would another country with a grievance against someone in the U.S. be justified in sending a special operations team here to assassinate a person believed to have killed 73 people by blowing up an airliner, and to have committed numerous other bombings in Venezuela, the U.S., and other countries?

Such terrorist acts were committed by the late Orlando Bosch, identified by the FBI as a leader of a terrorist organization, who was given sanctuary by the U.S. for decades until his death a few weeks ago in Miami. However, no pictures will shed light on such violations of domestic and international law. What seems unarguable is that the U.S. sees itself above concerns about such legalities.

The former administration declared a “War on Terror,” which is an oxymoron because one cannot be at war with a tactic. Terror is a tactic. Unfortunately, this administration changed the rhetoric about our policy without changing the policy.

Taking bin Laden alive, if that had been possible, would have accomplished at least two things: 1.) skillful interrogation could have yielded valuable intelligence that would have saved lives; 2.) he could have been tried for his crimes and been subjected to a process not unlike that held at Nuremburg after World War II.

If Nuremburg was good enough for Nazi war criminals, it should have been good enough for someone like bin Laden. The importance of Nuremburg is that it stands for the proposition that some crimes are so horrendous that the nations of the world cannot tolerate or ignore them. This was a common view throughout the world about the 9/11 terror, but our subsequent actions diminished that view.

By dealing with crimes against humanity through due process and reason, the allies in World War II established principles that helped make our world more civilized, rather than more bloodthirsty, vengeful, and chaotic. My fear is that the supplanting of the rule of law engaged in by a succession of presidents at least since Ronald Reagan, and George W. Bush’s virtual disdain for the rule of law, has been extended by Barack Obama in many ways, both domestic and foreign.

We still have Guantanamo, secret prisons in the Middle East, the torture of prisoners (both American and foreign), increasing drone attacks across international borders, the humiliation and killing of innocents throughout the world, targeted assassinations against even American citizens abroad, three wars (Iraq, Afghanistan, Libya), 820 U.S. military bases in 135 countries around the world, the PATRIOT Act, our continuing support — financial and military — of corrupt regimes around the world, and a staggering debt to cover the costs of all of these activities.

Dead or alive, what Osama bin Laden accomplished, and continues to accomplish, is changing the world-wide perception of the American character from somewhat benevolent to hostile and lawless. In response, our government has moved the U.S. toward bankruptcy (with the aid of our feckless political and corporate class) and reduced our freedoms in the name of questionable security.

As the foreign policy analyst John Feffer wrote about bin Laden’s death, “His assassination calls into question the adherence of the West to its vaunted principles of justice, much as the support for Hosni Mubarak and other Arab dictators called into question the West’s commitment to democracy.” The martyred bin Laden will continue to be a symbol of the West’s failure to live up to its professed values.

I would like to see the pictures leading up to bin Laden’s death so I can judge for myself the righteousness of our government’s action. I certainly can’t take my government’s word that what it did was necessary or right because all governments lie, as demonstrated by at least seven lies told by a government spokesman about the bin Laden raid. (See the article by Joshua Holland.)

If the Middle East changes for the better in my lifetime, it won’t be because of what the U.S. did in Iraq, Afghanistan, Pakistan, and Libya — it will be because of the awakening (called the Arab Spring by many) that started in Tunisia, led mostly by young people who were not afraid to risk their lives, their fortunes, and their honor for freedom.