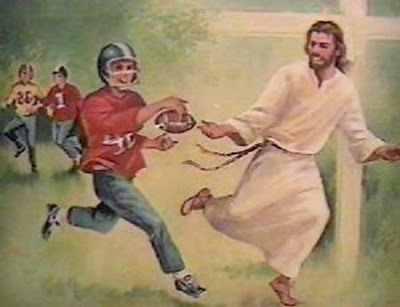 Image from The Gospel According to Hate.

They’re at it again:

I can’t quite smell football in the air, probably because of our wilting temperatures and prolonged drought, but a look at the calendar tells me that it’s time for the high school football season to begin. In many, if not most, Texas public schools, this means that the names of God and Jesus will be invoked to show that football is a divinely-approved activity and that all the players will be watched over so they don’t get hurt.

Of course, that last statement is complete nonsense. Data from five years ago shows that we have more than a half-million high school football injuries each year. Either God doesn’t care about football injuries or those injured must not be living righteous lives. I don’t actually believe either conclusion, but the only other reasonable conclusion is that prayer doesn’t work the way many mortals seem to believe.

Aside from that discussion, which usually goes nowhere, there is the question of the appropriateness of prayers at public high school football games, both prayers over the public address system as well as prayers uttered by the football players themselves in a group either in the locker room or before or after the game on the field.

Most people seem unaware that this issue has been settled law for over a decade. In summary, in 2000, the U.S. Supreme court decided whether the Santa Fe ISD (located between Houston and Galveston) could have prayer before each football game. The court ruled against prayer by a chaplain and prayer by someone chosen by the students. It decided that having “nonsectarian, nonproselytizing” prayer is also prohibited by the U.S. Constitution’s Establishment Clause. This decision came nine years after the court had found that prayer at public high school graduations is a violation of that same provision in the constitution: “Congress shall make no law respecting an establishment of religion.”

To explain the court’s reasoning, it might help to refer to a few lines of the opinion in Santa Fe, which was adopted by six of the nine Supreme Court Justices. Pregame prayer delivered

on school property, at school-sponsored events, over the school’s public address system, by a speaker representing the student body, under the supervision of school faculty, and pursuant to a school policy that explicitly and implicitly encourages public prayer

is not private, but public speech.

Regardless of the listener’s support for, or objection to, the message, an objective Santa Fe High School student will unquestionably perceive the inevitable pregame prayer as stamped with her school’s seal of approval.

Under the Constitution, governments in the U.S., and that includes public schools, are not free to promote religion, especially when school-aged children are involved.

I have tried to understand the arguments of those who favor such prayers. Some of them want the acknowledgement of their religious views in a public forum. Such acknowledgement is certainly permissible if the forum is not a government-sponsored activity. If the Lion’s Club sponsors a junior rodeo, they can pray before, after, and during every event at will. The Lion’s Club is not a government entity. It is a private organization. But when the government sponsors religious activity, which prayer is, the Court has other concerns.

It considers school-sponsored prayer a

serious constitutional injury that occurs when a student is forced to participate in an act of religious worship because she chooses to attend a school event. But the Constitution also requires that the Court keep in mind the myriad, subtle ways in which Establishment Clause values can be eroded, … and guard against other different, yet equally important, constitutional injuries. One is the mere passage by the District of a policy that has the purpose and perception of government establishment of religion.

Those who believe in the efficacy of prayer to protect players against injury can pray along the entire game if they choose. Is prayer effective only if it is uttered over the loudspeaker system at the beginning of the game? The group Americans United for Separation of Church and State has explained the important distinction between the right to pray and the prohibition against government sponsorship of prayer:

There is a critical difference between private individual speech and speech promoted by the government. Consider this analogy: A group of people can go to a public park and exercise their free speech. They can even get on “soapboxes” and share their speech with others. But once the state decides to help broadcast one person’s speech to everyone in the park because it is popular, it becomes state-sponsored speech.

Whether a student chooses to pray at a football game is entirely up to him or her, as it should be. But it becomes state-sponsored when the school broadcasts the popular prayer to an entire audience in attendance for a football game. Public schools must be neutral on religion to protect the rights of everyone. Students should not be pressured to pray, whether it’s at football games, in the classroom or anywhere else.

I not only oppose government-sponsored prayer, but I also have a different view of football than others may have. I played six years in junior high and high school in what was referred to as a “football town” — Port Arthur, Texas. I was an above-average athlete, but not exceptional. I was well-coordinated and muscular, weighing about 205-210 during high school, and standing six feet, one-and-one-half inches tall.

My coaches believed that what prevented me from being exceptional was that I was not mean enough. We were encouraged to take off the heads of our opponents, to tackle and hit hard, and punish those we played against. In those days, we were taught to use our helmets as a weapon, something that is not permitted today because of the great chance of injury.

I remember one game in 1961 against a team whose star player was a small, but fast, halfback. One of our assistant coaches offered a reward to any lineman who could take him out of the game. That occurred in the second quarter when one of our tackles had an opportunity to tackle the halfback in a way that hurt him. The halfback did not play for the rest of the game and our team won easily.

That assistant coach went on to coach in college, including a stint as an assistant at the University of Texas. I told my parents about this incident, but they were not ones to make waves, especially against the football program in a place where football was a second religion.

Often, football was coached in junior high and high school in the 1950s and 1960s as a brutal game, the purpose of which was to hurt and punish opponents and make them not want to get up off the ground after they were put there by a ferocious hit. I’m not sure where prayer fit into this scheme, except to make people feel good about themselves for enjoying the violent spectacle that is football, though it could and can be enjoyed for its occasional choreographed precision.

Another related use of prayer is by the team itself. Almost always initiated by coaches, whether directly or indirectly, football team prayer is meant to create solidarity, camaraderie, and team cohesiveness. As a psychological tool, it may achieve these results. Of course, for Jewish players or atheists or agnostics, prayers offered in Jesus’ name may have the opposite effect.

Prayer at football games and by football teams has been going on perhaps as long as we have had football, though I suspect it may have had its origin during the McCarthy era when most of U.S. society reacted to “godless communism” by promoting religious activity by adding “under God” to the Pledge of Allegiance and adopting “In God We Trust” as our national motto.

Nevertheless, school-sponsored prayer at football games is prevalent today. In recent weeks, I have read about complaints against such practices raised in schools in DeSoto County in Mississippi and Bell County in Kentucky. In both cases, interventions by the Freedom From Religion Foundation have stopped such unconstitutional practices.

Nearly 250 years into our constitutional republic experiment is as good a time as any to honor our Constitution by following its clear prohibitions against government sponsorship and promotion of religion. As both Thomas Jefferson and James Madison reminded us, the intermingling of government and religion harms both institutions.

One Response to Lamar W. Hankins : Football for Jesus