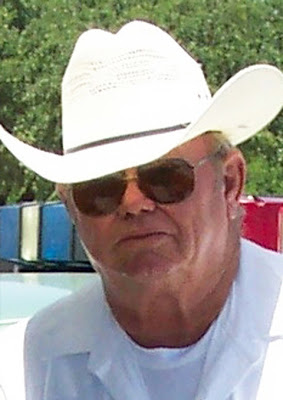 Kyle, Texas-area Constable James Kohler: “If they can’t pledge allegiance to that flag, they need to get the hell out of the United States. Image from Hays Free Press.
Respect for freedom of conscience
missing in Hays County

“If there is any fixed star in our constitutional constellation, it is that no official, high or petty, can prescribe what shall be orthodox in politics, nationalism, religion, or other matters of opinion or force citizens to confess by word or act their faith therein.” –– West Virginia Board of Education v. Barnette, 319 U.S. 624 (1943)

SAN MARCOS, Texas — The San Marcos Mercury recently reported that  Hays County Commissioner candidate Sam Brannon refused to stand and participate in the Pledge of Allegiance at the beginning of a Commissioners Court meeting about a year ago.

His inaction was challenged by Kyle-area Constable James Kohler, who called out Brannon publicly for standing silently without his hand over his heart during the ceremonial recitation of the pledge at the beginning of the court session.

Kohler is reported to have said, “I’ve never seen anybody not salute, not put their hand over their heart, when we pledge allegiance to the flag of the United States of America. If they can’t pledge allegiance to that flag, they need to get the hell out of the United States.” Kohler also noted that Brannon did not bow his head for the court’s invocation.

However Kohler’s official position is described — high or petty, or perhaps somewhere in between — he has no grounds for impugning the integrity of a citizen for exercising his or her conscience, as the Supreme Court opinion quoted above holds.

I know nothing about Brannon except what I have read in the local media. He may be a scoundrel or an upstanding person, or somewhere in between. Some have called into question Brannon’s lifestyle, past political activities, financial dealings as a former candidate, and whether he is a legitimate resident of County Commissioner Precinct 3, in which he is a candidate this year. But those matters are beside the point raised by Kohler. Perhaps a bit of background on the pledge can put this whole matter in context.

The Pledge of Allegiance was written in 1892 by the author, editor, Christian socialist, and Baptist minister Francis Bellamy as part of an advertising campaign to sell flags to schools and promote the magazine The Youth’s Companion, for which Bellamy was an employee hired to participate in this promotion. The magazine even worked into its advertising campaign the celebration of the 400th anniversary of Columbus’s discovery of the New World, with the flag as the centerpiece — it sold flags to 26,000 schools during the campaign. As written originally, Bellamy’s pledge read:

I pledge allegiance to my Flag and the Republic for which it stands, one nation, indivisible, with liberty and justice for all.

In 1923, the words were modified slightly from “my Flag” to “the Flag of the United States of America.” That version lasted until the McCarthy era, when President Eisenhower, in 1954, was persuaded to join with the Knights of Columbus religious group to support having Congress adopt the pledge with the added words “under God” to distinguish the United States from the Soviet Union’s “Godless Communism,” giving us the pledge as it exists today:

I pledge allegiance to the flag of the United States of America, and to the republic for which it stands, one nation, under God, indivisible, with liberty and justice for all.

Originally, Bellamy had prescribed a salute to the flag when the pledge was recited that resembled the Nazi salute. During World War II, this practice was largely abandoned in favor of a hand held over the heart, or in the case of a service man or woman, a military salute.

Of course, no law requires any particular behavior during the recitation of the pledge, but custom and social pressure have usually assured that standing at attention and gesturing as described during the pledge’s recitation are followed by most people.

In the 1930s, the expulsion from public school of the children of Jehovah’s Witnesses for their unwillingness to salute the flag and recite the pledge led to a Supreme Court decision that venerated patriotism over freedom of conscience.

The parents argued that as Jehovah’s Witnesses, the children’s allegiance was only to God; thus, to salute the flag and recite the pledge would violate their religious beliefs. But the Supreme Court held that the school district’s interest in creating national unity through a patriotic practice allowed school officials to require students to salute the flag in spite of their religious beliefs.

The 1940 decision was grounded in the shibboleth that “National unity is the basis of national security.”

Almost immediately after the decision was rendered, Jehovah’s Witnesses were set upon by mobs and beaten, and their children were expelled from public schools. According to the book Judging Jehovah’s Witnesses: Religious Persecution and the Dawn of the Rights Revolution, by Shawn Francis Peters, by the end of 1940 “more than 1,500 Witnesses in the United States had been victimized in 335 separate attacks.” Such attacks included beatings, tarring and feathering, hangings, shootings, maimings, kidnappings, castration, threats, and other acts of violence.

The widespread barbarity engendered by the court’s opinion, in combination with the fear caused by the rise of totalitarianism in Europe, so shocked the court that it looked for a way to reverse its decision. In 1943, it found a way to do so. In West Virginia Board of Education v. Barnette, the Supreme Court held that mandating recitation “invades the sphere of intellect and spirit which it is the purpose of the First Amendment to our Constitution to reserve from all official control.”

The behavior of Constable Kohler toward Sam Brannon is one kind of action that the Supreme Court may have had in mind when it wrote that “no official, high or petty, can prescribe what shall be orthodox in politics, nationalism, religion, or other matters of opinion or force citizens to confess by word or act their faith therein.”

It is shameful that no public official who witnessed Kohler’s outburst toward Brannon challenged it. Reports indicate that Hays County Judge Bert Cobb seemed beguiled by Kohler’s behavior. Perhaps all of our public officials are as petty as was Kohler. Certainly, they could all stand to learn something about our constitutional history.

But these are the same public officials who routinely use their public offices to force their preferred religious practices — Christian prayers — on all our citizens at public meetings. I can’t imagine that any of them will ever be able to appreciate the importance of the right of conscience that we are guaranteed by the Constitution. They have no problem forcing their theocratic views on us all, and they treat obeisance to the state no differently.

They would be wiser leaders if they heeded the words of Thomas Jefferson written to Benjamin Rush in 1803:

It behoves every man who values liberty of conscience for himself, to resist invasions of it in the case of others; or their case may, by change of circumstances, become his own.