Posted on September 5, 2012 by Thorne Dreyer 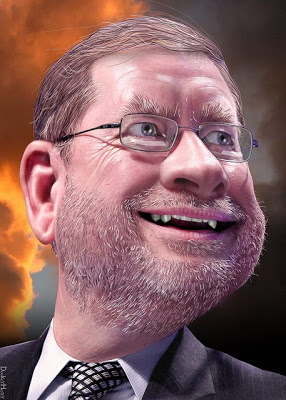 Blackmailer Grover Norquist. Caricature by DonkeyHotey. Inset photos below: Jack Abramoff and Ralph Reed.
The pledges of men are
oft interred with their bones

Republicans fear Grover Norquist, who keeps their pledges locked in a safe as though they are valuable stock certificates.

In 1776, 56 men pledged to each other their “Lives… Fortunes and… sacred Honor” as they embarked on a course of conduct that would end with a group of self-governing united states. They envisioned a union with the “full Power to levy War, conclude Peace, contract Alliances, establish Commerce, and to do all other Acts and Things which Independent States may of right do.”

About 210 years later, along came a man with an idea that the elected officials of those united states — created by the courage of all who opposed British rule of the colonies — should take a different pledge. This was a pledge that as elected officials they would not raise taxes. Some of the details of the pledge at the federal level are more complicated, but the simplest statement of the pledge is the one presented to state legislators: “I will oppose and vote against any and all efforts to increase taxes.”

Instead of pledging their lives, fortune, and sacred honor to one another or to the people, they decided to do Grover Norquist’s bidding, through his organization Americans for Tax Reform, and pledge to their constituents, as Norquist interprets it, that they would not vote to raise taxes. What a pitiful, puny pledge this is when contrasted to the pledge of the patriots who risked everything to found this country.

The people who now do Norquist’s bidding act as mindless automatons, not pledging to do what is best for the country or their states, but pledging to stifle the very government created by those patriots over two centuries ago.

In Norquist’s interpretation of his pledge (officially called the “Taxpayer Protection Pledge”), there are no exceptions for the life or well-being of the country, or if the need for more revenue is caused by the rape of our land by another foe. And if you eliminate a tax subsidy, that is a tax increase according to Norquist and is forbidden by his pledge without a concomitant reduction in tax revenue elsewhere.

Norquist uses his pledge the way a blacksmith uses a hammer and anvil. He places the politician who foolishly signs the pledge between the anvil of the threat of an opponent in the next election and the hammer of the promise of unlimited funds to be spent in opposition to the pledger who changes his mind. If a politician refuses to sign the pledge, the same anvil and hammer are there for Norquist to use to defeat the noncompliant outlier. Thus Norquist the political blacksmith becomes Norquist the political blackmailer.

It is ironic that Norquist’s and other Republicans’ great hero, Ronald Reagan, raised taxes 11 times during his eight years as President, according to former Republican Sen. Alan Simpson, Co-chair of the Commission on Fiscal Responsibility and Reform. During Reagan’s two terms, debt rose from $300 billion to $3 trillion. A 1983 tax hike supported by Reagan as part of shoring up the Social Security and Medicare systems went, in part, to pay for government-funded health care, i.e., Medicare. Reagan also signed the largest corporate-tax hike in U.S. history.

Whatever I may have thought of Reagan during his terms as President, he was a patriot of the sort who founded this country. He knew the difference between political positions and reality, and he understood that governing was what he was elected to do, no matter his politics. The reality was that if he wanted to govern effectively, rather than be dogmatic, he would have to compromise.

People like Norquist, Ryan, Boehner, and the entire Texas delegation of Republicans in the Congress (who have all signed the Norquist pledge) don’t believe in governing. They just want to keep President Obama from governing.

Their disdain for governing is so complete that they have refused to accept their Constitutional responsibility to declare war, preferring to let a succession of presidents make those decisions. They have been unwilling to perform their oversight responsibilities to see that the laws are faithfully executed, especially the laws (including treaties to which the U.S. is a signatory) related to torture and due process. They prefer nullification of our laws to governing.

While Reagan saw his election as an implicit pledge to govern, today’s Republicans (along with a few Democrats) understand only their pledge to Grover Norquist. 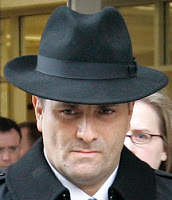 But Norquist is only one branch of a three-way connection that shows as well as anything how politics works today. Norquist met Jack Abramoff and Ralph Reed when all three were college Republicans, and they then joined forces in the “Reagan revolution.” Reagan could not have known what venomous creatures surrounded him.

Norquist chose the anti-tax route to fame, with some lobbying thrown in for its profit potential. Abramoff chose to make his money as a lobbyist, sometimes extorting money from naive people who needed help to protect their own interests. Reed used his faith connections to whip up support for the GOP and faith-based issues among his evangelical friends. But they all participated in laundering money for one another.

When Abramoff was approached to lobby to protect gambling casinos owned by certain Indian tribes, he enlisted Norquist’s help to push against the taxing of casino profits. When it seemed as though Texas might allow Indian casinos to open up operations close to the Louisiana border in competition with the Coushatta casino in Louisiana, Reed was brought into the scheme to corral evangelicals in Texas to oppose Texas casinos and thus eliminate a threat of competition with the Coushattas. All three shared the Indians’ money, but only Abramoff went to prison for his misdeeds.

The entire story is far more convoluted and involves many more politicians (such as Tom DeLay and John Cornyn) than can be explained in this column, but a quick look at Wikipedia will give readers a good start on understanding the complete picture.

Abramoff, after four years behind bars, now claims to be a good-government reformer and has his own radio talk show. Reed has expanded his political work into new entities that work to protect the Republican brand wherever evangelicals’ support is needed. Norquist has taken on many clients with Middle East concerns that are looked on scornfully by most politicians since 9/11. 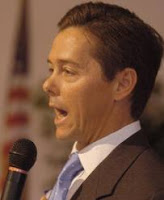 Virginia Republican Rep. Frank Wolf has accused Norquist of working for terrorist financiers Abduraham Alamoudi and Sami Al-Arian. But such unsavory connections have not reduced Norquist’s influence among Republicans, who still take the pledge to oppose all taxes.

If a pledge signer ever votes for something like eliminating the $6 billion a year ethanol tax subsidy that corn farmers received for 30 years, Norquist will call the pledger a liar, casting doubt on the politician’s character and trustworthiness. This is what Norquist did to Oklahoma Republican Sen. Tom Coburn, who decided that the public debt was too important an issue to have its solutions held hostage to Norquist’s pledge.

Coburn is without question a conservative, and he has strong connections with his constituents. He is a medical doctor and a Baptist deacon. He might be able to survive a political attack from Norquist, but others may not be so fortunate.

Republicans fear Grover Norquist, who keeps their pledges locked in a safe as though they are valuable stock certificates. For Norquist, they are, as long as he can keep politicians believing that they can never change their minds on this political issue. That would come as news to Reagan, George H. W. Bush, and Mitt Romney (and many other politicians from both major parties), all of whom changed their minds about numerous political issues when circumstances warranted the changes.

I suppose Norquist’s timid politicians have not learned that the way to deal with bullies, including political bullies, is to stand up to them and call them out for their bullying.

As Alan Simpson said about such politicians, “The only thing that Grover can do to you is defeat you for re-election, and if that means more to you than your country… you shouldn’t even be in Congress.” But we should all know by now that Congress is full of people who would never have had the courage to be the kinds of patriots who formed this country. Their sacred honor is pledged to fanatical dogmatists like Grover Norquist, not to America.