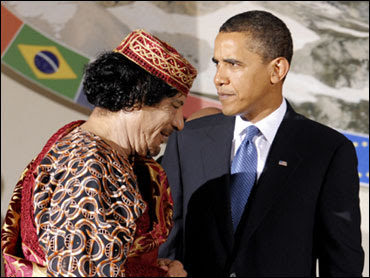 The debate over U.S. efforts to work with NATO in what has been described as an essentially humanitarian effort to prevent Moammar Gadhafi from killing more Libyans underscores problems with U.S. foreign policy. It’s true, as New York Times columnist Nicholas Kristof has pointed out, that “we don’t have an exit plan, that (Obama) hasn’t articulated a grand strategy, that our objectives are fuzzy, that Islamists could gain strength.”

Some will argue that we don’t have a consistent foreign policy. After all, we refused to intervene in the slaughter in Darfur, the Ivory Coast, Rwanda, Yemen, Syria, and Bahrain. We did intervene in Kosovo 12 years ago and the outcome seemed to serve humanitarian goals, though our involvement was slow in coming. Ronald Reagan sent troops to Grenada on a mostly foolish humanitarian mission (with ridiculous cold war aspects), and George H. W. Bush prevented Saddam Hussein’s takeover of Kuwait a few years later.

What distinguished these interventions from those we passed on is that they were of limited scope and duration. Militarily, their goals and objectives were possible, and relatively easy to obtain. Sending American troops to Rwanda or the Ivory Coast would bog us down in a military situation that would likely result in as great a loss of life as we would have sought to prevent. Worse still, the involvement would likely not end for decades, as has happened in Afghanistan and Iraq.

So Obama’s calculation seems to be that we will intervene if we have lots of help from other countries and alliances, if the possibility of a short-duration intervention is realistic, and if the chances of success appear great. No matter how compelling the suffering in other locales, we will not commit military might if these criteria are not met.

I don’t like the policy and I don’t like the alternatives. But the world is not an orderly place, where all problems are solvable. Sometimes there are nonmilitary steps that can be taken in various trouble spots around the globe if we have the will, which we do not have, for instance, in the case of preventing Israel from taking more land from Palestinians, which continues unabated by humanitarian concerns.

Perhaps it’s desirable, or even morally imperative, for Western nations in general, and America in particular, to enter another civil war in the Middle East. But the framers of the Constitution had very good reasons for making it difficult for America to go to war. They knew that even wars that begin with the best of intentions often end up being driven by the worst ones.

They also knew that while war is almost never in the interest of a nation’s people, it is often in the interest of a nation’s rulers, who reap the political and economic benefits of war while bearing little or none of its costs. That’s why they designed a system of barriers to action — which is, after all, what the rule of law is supposed to be — before politicians could send others off to kill and be killed in the name of the noble national goal of the moment.

While I take the constitutional requirements discussed by Professor Campos seriously and believe that the Congress should have a vigorous debate before the U.S. ever embarks on making war for whatever reasons, no matter how good those reasons seem to the executive or to me, I realize that the Congress has abdicated its constitutional authority with respect to war-making.

Since World War II, the Congress has not ever declared war, yet the U.S. has embarked on military campaigns in over 70 countries by executive fiat. Article I, Section 8, of the U.S. Constitution provides that Congress has the sole power “to declare war [and] grant letters of marque and reprisal.” And Article II, Section 2, provides that “The president shall be Commander-in-Chief of the Army and Navy of the United States.”

While it seems clear, from the history of the Constitutional Convention and the views of most of the drafters of the Constitution, that they intended for Congress alone to declare war, presidents nevertheless often act unilaterally, or after some minimal consultations or discussions with members of Congress.

These arguably competing provisions in Article I and Article II have created a constitutional conundrum that will always be used by presidents to engage in war unless we find a way to reconcile the two positions.

After tiring of war by Executive fiat, in 1973 Congress passed the War Powers Act in response to the prosecution of the Vietnam War by both Presidents Lyndon Johnson and Richard Nixon, a war that had proceeded without a congressional declaration for at least eight years with devastating consequences for both American soldiers and Vietnam fighters and civilians.

Under the War Powers Act, the president is supposed to obtain congressional approval of military action within 90 days after introducing troops into hostilities. Presidents have generally ignored the War Powers Act, using Article II, Section 2 as their constitutionally-mandated authority to send troops into combat. While a few Congressional voices have been raised periodically against such Constitutional abuses by the Executive, Congress as a whole has failed to resolve this Constitutional dilemma.

But candidate Barack Obama, as a U.S. senator in 2007, said, “the president does not have the power under the Constitution to unilaterally authorize a military attack in a situation that does not involve stopping an actual or imminent threat to the nation.” Apparently, he has changed his mind.

The author William Blum identifies the following purposes used by presidents to take military actions. They do not include humanitarian concerns:

While I believe that there is a humanitarian impulse that guides some U.S. foreign policy, I always look for other reasons, as well. Usually, I find another rationale from Blum’s list that is in play when we use our military might anywhere in the world.

In the case of Libya, Sen. Bernie Sanders has revealed in the last few days that Gadhafi’s Central Bank of Libya owns a 59% stake in the Arab Banking Corporation (ABC), which is based in Bahrain and has two branches in New York City. The ABC received at least 45 emergency, low-interest loans (0.25%) from the Federal Reserve between December, 2007 and March, 2010.

The U.S. Treasury Department has exempted the ABC from economic sanctions that have been applied to Gadhafi’s regime. Such contradictory relations with Libya make Obama’s military actions even more perplexing and suggest that Blum’s fourth reason for war may be in play.

The more we understand about our relations with Libya and other countries, the more difficult it is to accept Obama’s humanitarian rationale. As syndicated columnist David Sirota has pointed out, U.S. foreign policy had mostly ignored the humanitarian crises in Egypt before the recent fall of Mubarak, a dictator that we warmly supported financially and militarily for over 30 years.

We consider the totalitarian Saudi royal family a friend and ally, and our government continues to praise Syria’s dictator, Bashar al-Assad, as a reformer even as he slaughters his own people. Sirota sees the Libya war-making as related to oil, defense contracts, and the “Pentagon’s brand-new Africa Command establishing its first foothold on the resource-rich continent, … but it is not primarily about saving lives.”

Given these contradictions and the seemingly unassailable facts of U.S. interventions for nearly 65 years and the inability of the Congress to assert itself to limit the Executive’s war-making powers, the most palatable policy to me is one that involves cooperative international efforts to protect the helpless from slaughter or death.

Building and strengthening these international cooperative humanitarian efforts needs more attention and, if done properly, at least will not subject the U.S. to hatred and retribution for imposing our will in the pursuit of our own geopolitical objectives.

While I am not sanguine about what we are doing in Libya, it is a far less destructive policy than were the interventions in Afghanistan and Iraq. That is faint praise, but until Congress begins to care more about foreign affairs than it does about its domestic agenda, we cannot expect fealty to Constitutional principles.