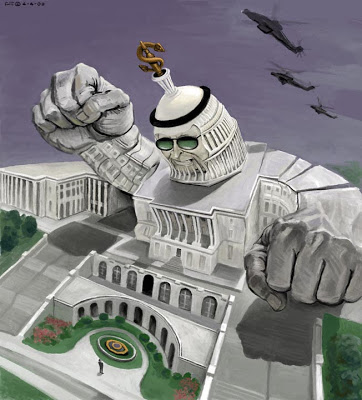 The assault of corporatism. Image from The Nation blogs.
Medicare’s backstory:
How corporatism controls the agenda

Ever since President Lyndon Johnson succeeded in getting Medicare enacted in 1965, corporatist politicians have done their best to make sure that the program would benefit America’s health insurance and pharmaceutical corporations, at the expense of the people. This was true when President George W. Bush proposed a Medicare drug benefit to enhance his reelection bid before the 2004 election, but no one anticipated that the Republicans’ political calculations would backfire as they have in 2011.

This turn of events is due in part to the reasons Republicans voted for a drug benefit for Medicare (Part D), a benefit that was provided with deficit spending. Some supported it because they thought Part D would be so expensive that it would lead to the death of Medicare. And they made sure that it would benefit the pharmaceutical corporations by letting them design the drug coverage that could be offered.

As David Cay Johnston — a journalist who writes about economics — explains in his book Free Lunch, the Republicans were dishonest about the expected cost of Part D. Publicly, they said that it would cost $400 billion over 10 years. But the insiders were told that the cost would be close to double that amount. Some Republicans thought that the actual cost, once it became known, would cause Part D to drag down Medicare as an unsustainable program, a desire high on Republican wish lists for 40 years.

By the time Congress approved Part D, the Bush administration was pumping trillions of dollars into two wars paid for by borrowing. The U.S. deficit was soaring, contributing to further pressures to cut all programs intended to benefit people rather than corporations. Many politicians who do not like people programs thought that in a few years it would be possible to eliminate such programs out of a perceived necessity to control government spending.

Of course, the tax cuts on America’s wealthiest 2-3% created even greater deficits, furthering the same goal. The financial collapse late in Bush’s presidency further encouraged the corporatists to spend money we did not have to bail out the financial sector, putting even more pressure on people programs.

This year, after the Republicans took control of the House of Representatives in the 2010 elections, Paul Ryan (and all but four House Republicans) believed that the time to kill Medicare was at hand.

Ryan proposed a budget that would turn Medicare into a voucher program that would force seniors to purchase their own health insurance in the private market with the help of a so-called Medicare voucher that would come nowhere close to making it affordable for most seniors — paying for perhaps one-third of the cost of health insurance in the corporate marketplace. Their justification for this so-called “reform” was that Medicare costs were out of control.

Ryan’s budget proposed to change the basic character of Medicare — from an inexpensively administered, single-payer health care insurance program — into a way to reward the giant health insurance corporations that have been a mainstay of political funding for the corporatists of both political parties. Ryan wanted to continue to use the name Medicare while altering its basic structure and purpose, leaving only the skeletal remains of what has been an effective public health insurance program.

Political corporatists like Ryan support government schemes that enhance the profits of corporations at the expense of the people. This is what happened with Part D. Instead of following marketplace concepts in which businesses sell their products for the lowest profitable price, the Part D law prohibited Medicare administrators to negotiate drug prices. Instead, Part D drugs would be bought at prices several times higher than the market required.

For example, Lipitor, the golden-goose cholesterol drug owned by Pfizer, is sold in the U.S. for over three times what it sells for in Canada, earning Pfizer $12.4 billion in 2008 in the U.S. alone. A 10 MG tablet of Lipitor sells retail for about $1.33 per day in Canada; in the U.S., for over $4 per day. Competition in the Part D benefit would have yielded lower profits for the pharmaceutical corporations, so the corporatists in Congress and the White House made sure the law would not permit capitalist markets to operate as Adam Smith envisioned them.

When Obama pressed for health insurance reform early in his administration, the corporatists in Congress and in the executive branch held sway and designed a program that assured huge new profits for the giant corporations.

Some of the same people who worked for the corporations when Part D was passed played a similar role in the passage of health care reform in 2010, both inside and outside of government.

One of those people was the Senate Democrat from Montana, Max Baucus; another was Republican representative Billy Tauzin from Louisiana, who left Congress after 2004 to lobby for the pharmaceutical industry and become a part of the health insurance sector; another is former Louisiana Senator John Breaux, a Democrat, who left the Senate after 2004 to become a health industry lobbyist; and another is Republican Representative Bill Thomas of California, who left the Congress in 2007 to work on health care policy for the American Enterprise Institute (a right-wing supporter of corporatism) and become a lobbyist for the health care industry.

The Republicans, including Paul Ryan, are correct about one aspect of Medicare — something must be done to make Medicare sustainable for the future. The passage of Medicare reform last year as part of the health care reform package made a start by limiting payments to corporations that offer Medicare Advantage plans, by gradually providing fuller coverage for prescription drugs, and by implementing quality controls (to avoid duplication of services and better coordination of care) that are expected to lead to cost savings. But more must be done.

Medicare’s hospital insurance trust fund will approach zero in about 10 years, according to most prognostications. But, until Congress and the administration have the fiscal discipline to stop throwing away trillions of dollars on unnecessary wars, tax loopholes for the wealthy, lower taxes for the wealthy, special tax breaks for corporations, and extending corporate welfare at every opportunity, very little can be done to improve Medicare’s solvency without destroying its purpose and its benefit.

Conservative New York Times columnist David Brooks has made some suggestions that are worth considering, beginning with “a bipartisan commitment to reduce the growth of Medicare spending.” Such a commitment will require eliminating Medicare as a golden goose for the health insurance and pharmaceutical corporations, an action agreeable to few politicians now in office.

Brooks also suggests, “Republicans should offer to raise tax revenues on the rich. They should get rid of the interest deductions on mortgages over $500,000 and on second homes. They should close corporate loopholes and cap the health insurance deduction.”

Brooks’s ideas would be a start to solving the long-term fiscal needs of Medicare, but they would be a meager start. We must do much more. First, without universal health insurance for all Americans, significant curbs on the costs of Medicare are unlikely. Further, Congress should increase funding of FBI efforts to detect health care fraud in both Medicare and Medicaid (the program for low-income people) and make the FBI accountable for its fraud investigations, something the corporatists oppose because such actions would harm their favored constituents — the health care and pharmaceutical corporations.

Republicans have opposed Medicare since Harry Truman first proposed a Medicare-type program in 1945. When the program was proposed anew in the 1960s, the opposition was simplistic at best:

Ronald Reagan in 1961: “[I]f you don’t [stop Medicare] and I don’t do it, one of these days you and I are going to spend our sunset years telling our children and our children’s children what it once was like in America when men were free.”

Barry Goldwater in 1964: “Having given our pensioners their medical care in kind, why not food baskets, why not public housing accommodations, why not vacation resorts, why not a ration of cigarettes for those who smoke and of beer for those who drink.”

Bob Dole in 1996, while running for the presidency, openly bragged that he was one of 12 House members who voted against creating Medicare: “I was there, fighting the fight, voting against Medicare… because we knew it wouldn’t work in 1965.”

These politicians, along with other corporate Republicans and corporate Democrats, don’t believe in programs that benefit people. They believe the purpose of government is to serve the direct interests of the corporations that make it possible for them to continue being elected. Only a massive political uprising by the people can prevent the mutilation and destruction of Medicare.

The tentative evidence is that the people now understand what is at stake in the next election cycle. While we will always have the political corporatists, we may be able to achieve enough balance in the Congress so that people are put first for a change.

3 Responses to Lamar W. Hankins : Medicare and the Corporatist Agenda