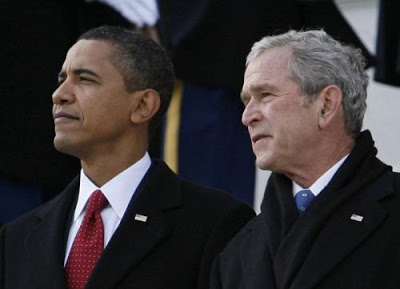 “History will have to record that the greatest tragedy of this period… was not the strident clamor of the bad people, but the appalling silence of the good people.” — Martin Luther King, Jr.

Looking back over the last four years, it has become clear that President Barack Obama has enthusiastically continued (and expanded in at least one case) five troubling policies of George W. Bush: foreign interventionism, the use of armed drones, extraordinary rendition, torture, and incarcerating alleged terrorists in Guantanamo.

Foreign adventurism encompasses the wars in Iraq and Afghanistan and the continued and expanded use of armed drones to kill people President Obama and his staff (including especially Obama’s new nominee to head the CIA, John Brennan) believe should die for their actions. Reportedly, Brennan maintains a “kill list” approved by President Obama. These drone killings occur throughout the Middle East, but particularly in Afghanistan, Pakistan, Yemen, and Somalia.

Killing in a war zone is relatively easier to justify under international legal principles to which the United States subscribes, such as the International Covenant on Civil and Political Rights, than are killings elsewhere. But under Bush’s view, which relies on the Authorization for Use of Military Force passed by the Congress seven days after 9/11, the “international war on terror” justifies killing anyone who the President and his agents believe is a terrorist, wherever they may be. Obama has accepted that view.

Under the International Covenant, lethal force by our military against enemy fighters in an armed conflict is permitted if done for military necessity, and if impact on civilian lives and property will not be disproportionate to the military objective. Currently, that limits such actions to Afghanistan, which we attacked because of its relationship to al Queda, the group responsible for the terrorist attack on 9/11.

CNN reports that 4,400 people have been killed in U.S. drone attacks since 2002, most in Pakistan. Obama has ordered six times more drone attacks than Bush ordered. Of those 4,400 deaths, about 25% have been civilians, including over 200 children. Because the CIA is responsible for most of these attacks, confirming these data through the government is impossible.

John Brennan has denied that there have been any civilian deaths. According to his reasoning, any male of combat age is a terrorist, yet drone attacks have killed those attending funerals and weddings, as well as 16-year-old Tariq Aziz and his 12-year-old cousin who had been learning how to take video of drones that constantly circled their village in Pakistan, and at least two American citizens in Yemen who were not in a war zone.

He was a boy who hadn’t seen his father in two years, since his father had gone into hiding. He was a boy who knew his father was on an American kill list and who snuck out of his family’s home in the early morning hours of September 4, 2011, to try to find him.

He was a boy who was still searching for his father when his father was killed, and who, on the night he himself was killed, was saying goodbye to the second cousin with whom he’d lived while on his search, and the friends he’d made. He was a boy among boys, then; a boy among boys eating dinner by an open fire along the side of a road when an American drone came out of the sky and fired the missiles that killed them all.

Before the drone attacks began and before 9/11, during the Clinton administration, the U.S. government began the practice, in a limited way, of extraordinary rendition, which has been described as “the apprehension and extrajudicial transfer of a person from one country to another.” After 9/11, the practice increased dramatically as a way to engage in torture away from the eyes of Americans and the media.

The CIA, along with other U.S. government agencies, has attempted to gather intelligence from foreign nationals suspected of involvement in terrorism by taking them to countries where U.S. and international legal safeguards do not apply, at least so far as the CIA is concerned.

These suspects are detained and interrogated by U.S. personnel at U.S.-run detention facilities outside U.S. territory or are handed over to foreign agents for interrogation. Such people are subjected to torture as that is defined by U.S. and international law.

While President Obama promised to end such practices, what his administration has done is put lipstick on the proverbial pig. Obama now assures us that the U.S. will not render a person to another country for detention and interrogation unless that country promises not to torture the suspect. While his administration has ceased using the worst practitioners of torture used by Bush (Syria, Egypt, and Libya), it has instead engaged the services of other countries to directly take such suspects into custody so that the U.S. will not be tainted by how the suspects are treated.

In spite of the evidence we now have of the wrongness of the invasion and occupation of Iraq, those Americans who spoke out from the beginning, as well as those who quickly realized the sham of the Iraq war, continue to be ridiculed. The most recent public example of the latter group is former senator Chuck Hagel, who has been named to become Obama’s next Secretary of Defense.

The interventionism recognized and opposed by Hagel and others is not evidence of an exceptional nation, but of one that has long ago forgotten the vision of its founders that we would not have a standing army, nor would we intervene in the affairs of other nations.

Finally, the interventions we have engaged in since 9/11 have led to the creation of a special prison at the Guantanamo Bay Naval Base, at the southeastern end of Cuba, which has been widely condemned around the world, by both allies and enemies.

The deathly and desolate place known simply as Guantanamo should sicken every American of good will and normal sensibilities. Many of the people incarcerated and tortured there were turned over to the U.S. in return for the payment of bounties, and many were not involved with terrorism. Right now, the Obama administration has determined that 86 men incarcerated at Guantanamo are guilty of nothing and should be repatriated to their home countries. But actions of the administration and Congress have worked together to ensure that the 86 will remain incarcerated indefinitely.

Four years ago, President Obama pledged to close the prison. Yet, he recently signed into law the National Defense Authorization Act for 2013, which will prevent any of the 166 men now incarcerated at Guantanamo from leaving for at least another year, including 56 men the government has listed as having been “cleared for transfer,” a process that requires the approval of many U.S. agencies and foreign governments. No one knows when these wrongfully incarcerated men will be allowed to return to their homes.

One of the most egregious human rights violations involving Guantanamo occurred to Al Jazeera journalist Sami al-Hajj, who was taken into custody at the Pakistani border after unknown individuals were paid a bounty by the U.S. for anyone they claimed to be a terrorist, but he was guilty of nothing related to terrorism.

The credentials of Sami al-Hajj as a journalist could not have been clearer when he was taken into custody. Amy Goodman, the primary host of Democracy Now!, recently summarized what Sami al-Hajj, now the head of Al Jazeera’s human rights and public liberties desk, endured at Guantanamo for six years:

The Al Jazeera cameraman was arrested in Pakistan in December of 2001 while traveling to Afghanistan on a work assignment. Held for six years without charge, al-Hajj was repeatedly tortured, hooded, attacked by dogs and hung from a ceiling. Interrogators questioned him over 100 times about whether Al Jazeera was a front for al-Qaeda. In January 2007, he began a hunger strike that lasted 438 days until his release in May 2008.

Recently, one innocent prisoner from Yemen — Adnan Farhan Abdul Latif — died in Guantanamo after nearly 11 years in captivity, leaving a wife and 14-year old son to mourn. He should never have been sent to America’s special prison, but someone was paid a $5,000 bounty to turn him in. He, too, was guilty of nothing related to terrorism. Mystery surrounds the circumstances of his death. U.S. authorities have told different stories about how he died, which should remind us all of the absolute truth of journalist I. F. Stone’s admonition that “All governments lie!”

When it comes to foreign adventurism, whether in the Middle East or elsewhere, the U.S. is well-positioned to take military action from its wide-spread collection of cruisers, submarines, dock landing ships, amphibious transport docks, amphibious assault ships, and aircraft carriers, which together number around 135, with others under construction.

In addition and of equal importance, the U.S. maintains over 1,000 overseas military bases according to David Vine, an assistant professor of anthropology at American University, in Washington, DC, who has published one book on such facilities and nearly completed another on the subject.

While the Iraq war is over for the U.S. military, around 15,000 military contractors reportedly still operate there on behalf of U.S. interests, and perhaps as many as 300 troops train Iraqi security forces. Plans to withdraw troops from Afghanistan include provisions to leave several thousand troops to continue training, provide support for the Afghan military, and perform counterinsurgency tasks.

Right now over 117,000 military contractors are in Afghanistan. No one outside of the government knows how many will be left in place once most U.S. troops have left, nor do we know how many CIA operatives will remain engaged there.

Mentioning the CIA inevitably brings up the question of torture. The evidence of torture by agents of the United States should be well-known by anyone who has read the newspapers since 9/11. That evidence spreads from Abu Ghraib, to extraordinary rendition sites, to Guantanamo, to our own military prisons in the U.S., where Bradley Manning was held for over a year in conditions and under treatments that violate the standards of decency which we claim to uphold.

Torture is illegal in all circumstances. The Convention Against Torture and Other Cruel, Inhuman or Degrading Treatment or Punishment, a treaty the United States ratified which makes it part of U.S. law, states unequivocally: “No exceptional circumstances whatsoever, whether a state of war or a threat of war, internal political instability or any other public emergency, may be invoked as a justification of torture.”

The prohibition of torture is absolute and unequivocal. Torture is never lawful. … Yet despite copious evidence of widespread torture and abuse during the Bush administration, and the Constitution’s mandate that the President enforce the laws, Obama refuses to hold the Bush officials and lawyers accountable for their law breaking.

For nearly 60 years, at least since President Eisenhower authorized a coup in 1953 that brought the Shah of Iran (Mohammad Reza Pahlavi) into power in place of the democratically-elected Dr. Mohammad Mosaddegh, the role the United States has played in the Middle East has been a tragedy.

What Martin Luther King, Jr. said about another tragedy is equally appropriate about our role not only in the Middle East, but in most of the world, where we have tried to control events and people with the armaments of war: “History will have to record that the greatest tragedy of this period… was not the strident clamor of the bad people, but the appalling silence of the good people.”

Deadly drones, foreign interventionism, extraordinary rendition, torture, and the legacy of Guantanamo require that more Americans speak out against the policies and practices of our government, hold officials accountable for their misdeeds, and find new ways to live in the only world we know. To do otherwise would allow both the bad people and the silent good people together to squander the promise of our great nation.