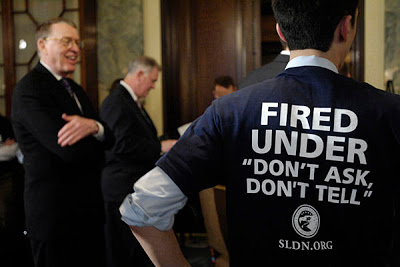 
Clearly, the President and his Justice department have the discretion, both in law and in practice, to refuse to appeal a decision that agrees with his own policy statements and beliefs.

In case you were wondering whether the President and the Justice Department are legally or constitutionally obligated to appeal the federal district court ruling that the Don’t Ask Don’t Tell (DADT) Act is unconstitutional, the simple answer is that no appeal is legally necessary. Nevertheless, late this past week an appeal was filed.

Plaintiff has proven that the Act captures within its overreaching grasp such activities as private correspondence between servicemembers and their family members and friends, and conversations between servicemembers about their daily off-duty activities. Plaintiff also has proven that the Act prevents servicemembers from reporting violations of military ethical and conduct codes, even in outrageous instances, for fear of retaliatory discharge. All of these examples, as well as others contained in the evidence described below, reveal that Plaintiff has met its burden of showing that the Act does not have a “plainly legitimate sweep.”

The court relied on testimony and the conclusions of three studies that found that having openly homosexual people serving in the military would not have a negative effect on the performance of the military. The opinion cites the testimony of Dr. Lawrence Korb (a former Assistant Secretary of Defense during the Reagan administration, an official with the Council on Foreign Relations, and a fellow at the Brookings Institute) before Congress in 1993:

According to Dr. Korb, there was no empirical research to support the view that homosexual servicemembers would disrupt unit cohesion, and that such evidence could not be obtained without integrating homosexuals into the military…

Dr. Korb testified concerning the experiences of foreign militaries and domestic law enforcement agencies that had integrated homosexual servicemembers, and stated that their integration had not adversely affected unit cohesion or performance in those entities. 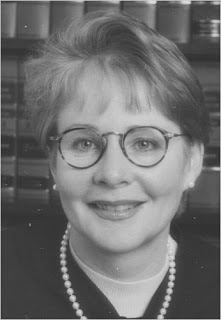 Federal District Judge Virginia A. Phillips.
The court found, based on the testimony of witnesses at trial, that the DADT Act itself negatively impacts unit cohesion and military readiness:

The testimony of former servicemembers provides ample evidence of the Act’s effect on the fundamental rights of homosexual members of the United States military. Their testimony also demonstrates that the Act adversely affects the Government’s interests in military readiness and unit cohesion.

Other testimony from witnesses in such specialties as national security policy, military sociology, military history, and social psychology, showed that the DADT Act failed to further the Government’s interests in military readiness or unit cohesion.

The testimony about the financial cost and loss of critical skills in the military caused by the discharge of homosexuals under the DADT Act also contributed to the judge’s conclusions. Critical skills include “Arabic, Chinese, Farsi, or Korean language fluency; military intelligence; counterterrorism; weapons development; and medicine.”

The court wrote, “Far from furthering the military’s readiness, the discharge of these service men and women had a direct and deleterious effect on this governmental interest,” with over 5,000 DADT discharges occurring since 2002.

A Pentagon study suggests “that for every person discharged after 10 years of service, six new servicemembers would need to be recruited to recover the level of experience lost by that discharge.” The cost of new recruitment was estimated to be about $95 million over the first ten years that DADT was in force.

Other adverse consequences of the DADT Act included “increased numbers of convicted felons and misdemeanants” brought into the military services “and increased numbers of recruits lacking the required level of education and physical fitness… allowed to enlist because of troop shortages during the years following 2001.”

After 2001, the armed services were compelled “to lower educational and physical fitness entry standards as well as increase the number of ‘moral waivers’ to such an extent that, in (Dr. Korb’s) opinion, it became difficult for the military to carry out its mission.”

Finally, the court pointed to one other circumstance that negates the importance to the military of DADT. Delaying investigations of violations of DADT until a person returns from a combat assignment, a routine occurrence,

directly undermines any contention that the Act furthers the Government’s purpose of military readiness, as it shows Defendants continue to deploy gay and lesbian members of the military into combat, waiting until they have returned before resolving the charges arising out of the suspected homosexual conduct.

If the warrior’s suspected violation of the Act created a threat to military readiness, to unit cohesion, or to any of the other important Government objectives, it follows that Defendants would not deploy him or her to combat before resolving the investigation. It defies logic that the purposes of the Act could be served by suspending the investigation during overseas deployments, only to discharge a servicemember upon his or her return to a non-combat station.

The court noted that the President stated further on October 10, 2009, “We cannot afford to cut from our ranks people with the critical skills we need to fight any more than we can afford — for our military’s integrity — to force those willing to do so into careers encumbered and compromised by having to live a lie.” Also noted is that Admiral Mike Mullen, chairman of the Joint Chiefs of Staff, opposed the DADT policy because it lacks integrity.

The court concluded from the evidence that the DADT policy failed to significantly further the government’s interests and is not necessary to achieve the government’s goals in maintaining a strong military.

Further, the judge found that the policy violates the First Amendment rights of gay and lesbian service members because the restrictions on speech are broader than is justified by the government’s needs, impede military readiness and unit cohesion, prevent gays and lesbians in the military from joining with others to petition their government for a redress of grievances, and punish servicemembers for engaging in private communications about matters related to their sexual orientation if such communications become known, even against the wishes of the writer.

The holding concluded that the DADT Act violates the substantive due process rights identified by a 2003 U.S. Supreme Court decision, as rights associated with the “autonomy of self that includes freedom of thought, belief, expression, and certain intimate conduct.” 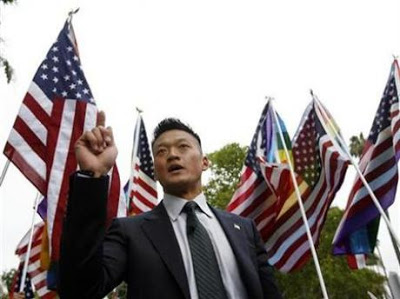 Lt. Dan Choi, who was dismissed from the U.S. Army for admitting he was gay, speaks during a rally in Beverly Hills, California May 27, 2009. Photo by Mario Anzuoni / Reuters.

To appeal or not to appeal

After the Justice department reviewed the Log Cabin decision, the President had to decide whether it was necessary to appeal the decision. Diane Mazur, a professor of law at the University of Florida College of Law, has laid out in a legal memorandum the basics about executive discretion to decline to appeal laws held to be unconstitutional.

Mazur’s primary areas of research include civil-military relations and military law generally. In her memorandum, she explains that the usual expectation is that the Justice department “will defend federal laws from constitutional challenge.” However, the usual practice is not mandatory: “There are well-recognized, standard exceptions that give the executive branch discretion in deciding whether or not to defend a law in some circumstances, and they would apply in deciding whether to appeal a court ruling finding that (DADT) is unconstitutional.”

when the president believes the law intrudes upon his express constitutional authority, such as the commander-in-chief authority. In those instances, DOJ may decline to defend a law that reaches too broadly and inappropriately restricts, for example, the president’s ability to direct military forces.

The second exception at play in this case occurs “when that defense would involve asking the Supreme Court to disregard or alter one of its constitutional rulings.” Such a ruling is found in the 2003 case noted in Judge Phillips’s opinion, Lawrence v. Texas, in which “the Supreme Court held that the Constitution protects the liberty of all persons, straight and gay, to enter into private, intimate relationships without interference by the government, unless there is sufficient justification for government regulation.” 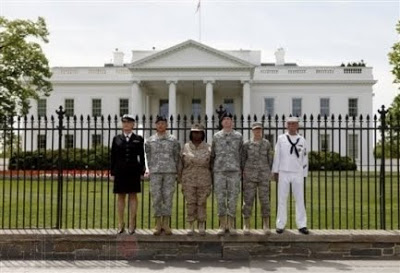 From left, Petty Officer Autumn Sandeen, Lt. Dan Choi, Cpl. Evelyn Thomas, Capt. Jim Pietrangelo II, Cadet Mara Boyd and Petty Officer Larry Whitt, who handcuffed themselves to the fence outside the White House April 16, 2010, during a protest for gay rights. Photo by Pablo Martinez Monsivais / AP.
In addition to these two exceptions of the common practice of defending laws against holdings finding them unconstitutional, there are numerous examples of a failure to defend such laws in every administration for the last 60 years. In fact, the Justice department did not appeal a similar decision in 2008 because it did not think its legal position would be sufficiently strong.

If the President believes that DADT harms national security, as he has said, it is within his prerogative to refuse to take an action detrimental to national security. He already has the authority, under the terms of 10 United States Code §12305, to issue an executive order suspending DADT in a national emergency, so the need for this law is already limited, providing further justification for allowing Judge Phillips’s opinion to stand.

In less than six weeks, a report is due from the Department of Defense study group on how best to implement an end to the DADT policy. Any appeal of the Log Cabin case would take much longer and likely be a waste of both government and judicial resources.

The Obama Justice department and the President regularly exercise discretion in deciding what federal laws to enforce or ignore. They have done so with the use of medical marijuana in the 15 jurisdictions where it is allowed. President Obama and all of the last five or six presidents have used signing statements to interpret and dismiss sections of laws with which they disagree, exercising discretion to abrogate a law, or a portion thereof, enacted by Congress.

Last June, President Obama refused to follow a new law that required him to work to get the World Bank and the International Monetary Fund to adopt certain policies favored by Congress. When Congress tried to require by statute that State Department officials not attend United Nations meetings led by nations believed to be sponsors of terrorism, the President exercised his discretion to ignore the law.

Clearly, the President and his Justice department have the discretion, both in law and in practice, to refuse to appeal a decision that agrees with his own policy statements and beliefs.

In the same month that a virulent homophobe is running to become governor of New York, that a gay New Jersey college student is bullied into committing suicide, that the views of a small Kansas congregation consumed by hatred for homosexuals has received national attention, and politicians from the Atlantic to the Pacific think bashing gays is good for their election chances, it is a mystery why the President decided to appeal the Log Cabin case.