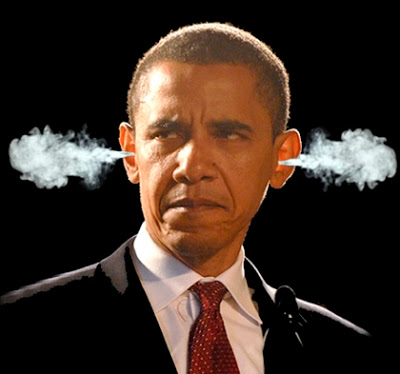 When I think of Barack Obama, I never think rage. I have raged against him on more than one occasion, but Obama never rages back. In fact, he is ridiculed by the same right wing for being too cool.

The man with so much money he doesn’t know what to do with it, Joe Ricketts, is bankrolling a documentary based on the book by Dinesh D’Souza, The Roots of Obama’s Rage. This book is further evidence that the right wing has no sense of irony.

When I think of Barack Obama, I never think rage. I have raged against him on more than one occasion, but Obama never rages back. In fact, he is ridiculed by the same right wing for being too cool. It appears that the right wing is just confused, in an Orwellian sort of way — rage is cool, war is peace, etc.

D’Souza’s book posits the thesis that Obama has a “Kenyon, anti-colonial” world view. Republican presidential aspirant Newt Gingrich was channeling D’Souza during his campaign when he said: “What if [Obama] is so outside our comprehension, that only if you understand Kenyan, anti-colonial behavior, can you begin to piece together [his actions]? That is the most accurate, predictive model for his behavior.”

D’Souza, Gingrich, Ricketts, and all the other anti-Obama zealots seem incapable of seeing Obama for what he really is — a mainstream American exceptionalist with a colonialist mentality. Every president in my lifetime has pursued a colonialist agenda, some more than others. Obama fits right in the middle of this group — not the most expansionist, but not anywhere close to being the least expansionist.

Unlike the earlier colonialism, where we actually controlled the apparatus of government in other countries, we now use our military might and economic leverage (directly and through the World Bank and the United States Agency for International Development) to control the policies of other countries. None of this has changed under Obama.

Ricketts’ other raps against Obama are economic. Ricketts believes that Obama is promoting socialism, driving up the deficit, and spending too much. This view is based on the bank and auto bailouts and a cursory look at spending and debt increases since Obama has been in office.

Ricketts seems to have forgotten that it was Bush who began the auto and bank bailouts, and it was during Bush’s terms that the federal debt almost doubled. Bush also increased entitlements — mostly his Medicare prescription drug program. Of course, Congress shares responsibility for all of these debt increases.

Many economists take the position that debt needs to be addressed, but this should be done gradually. But people like Ricketts, Paul Ryan, and Romney favor austerity at a time when the lack of government spending will keep the economy from recovering quickly. Economists Paul Krugman, Joseph Stiglitz, Robert Reich, Simon Johnson, and others believe that the lackluster economic recovery is due largely to limited government spending where it counts the most, and that declining federal government revenues are a result largely of the supposedly temporary Bush tax cuts that have been continued.

Our modern debt surge is much more about declining federal government revenue than it is about runaway spending… The smart approach is to begin the long and not-so-nice work of controlling deficits while allowing the economy to grow… The kind of austerity now being experienced in Europe is absolutely not what is called for in the United States. We have time and space for a fiscal adjustment, particularly because the world remains favorably inclined to buy United States government debt, and this holds down our long-term interest rates.

Helping state and local governments keep teachers, police, and firefighters on the job, as well as funding infrastructure projects will be a greater boost to the economy than has bailing out the banks.

Ricketts’ (and D’Souza’s) claims that Obama is a socialist and anti-colonialist have been rejected by two bellwethers of conservative thought — columnist George Will and The Weekly Standard. The oft-cited socialism indicator — the Affordable Care Act — is no more socialist than the health care proposals of Harry Truman and Richard Nixon, and its most controversial aspects were originally Republican ideas.

Ricketts justifies his alliance with D’Souza by pointing to what he believes is D’Souza’s great scholarly work. That work is based on a ridiculous syllogism that is partly fact, partly speculation:

Even if this syllogism were accurate, it would contradict, not explain, Obama’s pursuit of a colonialist agenda as outlined above. Far from being predictive of Obama’s behavior, as D’Souza claims, it explains nothing about Obama because its base assumptions are wrong: Obama was actually disillusioned with the anti-colonialist ideas of his birth father and has followed a foreign policy path trod by most of his modern predecessors.

U.S. foreign policy would be far different if the U.S. actually respected the autonomy of other countries and engaged other countries through bargaining and mutual benefits, rather than through economic manipulation, military threat, covert interventions, and war.

The arc of justice that Obama likes to talk about is working against the U.S. in many parts of the world. In South America, for instance, countries are electing leaders who are willing to combat colonialism in all of its manifestations. Bolivia, Brazil, Venezuela, and to a lesser extent Chile and Ecuador, are seeking control over their own resources and moving toward greater economic justice and cultural rights for their indigenous people.

Joe Ricketts, Dinesh D’Souza, the Tea Party true believers, and others who despise Obama may have available to them the great wealth that it takes to produce slick video attacks on the objects of their wrath, but that doesn’t give their views authenticity or accuracy.

The one thing that we can know for certain is that their rage is far greater than any emotion or action we have seen from Obama to date, and that rage is directed at their own delusions.