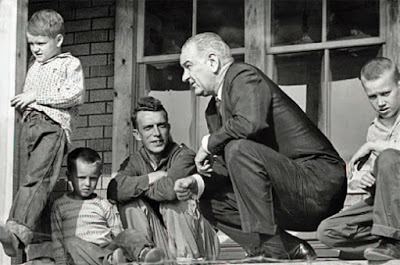 President Lyndon Johnson marked the start of the War on Poverty with a visit to Tom Fletcher’s front porch in Martin County, Kentucky, in April 1964. Photo by Walter Bennett / Time magazine. Image from Daily Yonder.
Paul Ryan’s war:
Not against poverty, but against people

In 1964, long before Paul Ryan was ever swaddled in a diaper, President Lyndon Johnson declared that because America is a great nation, it should not have nearly one quarter of its people living in poverty.

In a hackneyed play on words, Paul Ryan, Mitt Romney’s extremist vice-presidential running mate, declared, “In this war on poverty, poverty is winning.” His claim created an enticing sound bite for the evening news, but it is factually incorrect.

With a few exceptions, government’s approach has been to spend lots of money on centralized, bureaucratic, top-down anti-poverty programs. The mindset behind this approach is that a nation should measure compassion by the size of the federal government and how much it spends. The problem is, starting in the 1960s, this top-down approach created and perpetuated a debilitating culture of dependency, wrecking families and communities.

Correspondent John Nichols of The Nation took a look at the census data and found a different reality:

In 1964, long before Paul Ryan was ever swaddled in a diaper, President Lyndon Johnson declared that because America is a great nation, it should not have nearly one quarter of its people living in poverty. I was a junior in college then. Lyndon Johnson’s vision of an America in which all people had adequate food, clothing, shelter, and work moved me to drop out of college for a year to join Volunteers in Service to America (VISTA). I was assigned to a migrant labor project developed by a local nonprofit organization in South Florida.

While we helped many migrant farm workers in a modest way, what we did was a drop in the ocean of America’s poverty. But programs and agencies like Medicare, Food Stamps, Job Corps, the Office of Economic Opportunity, and Head Start made a vast difference in the lives of the elderly poor, impoverished families, poor youth in need of job skills, and the young children of America’s poor families.

After graduating from college, I spent seven years working for a local nonprofit agency in Texas that operated Head Start centers, job training programs, summer programs for poor teens, family planning and women’s health programs, and a host of projects developed by VISTA volunteers working for our local nonprofit agency — housing programs, a credit union, employment services, tutorial programs, recreation programs, buying clubs, food distribution, and more. What was done was limited only by the imagination of the participants and those who wanted to help them, and available funds.

What I experienced in those years was far more than what Paul Ryan blithely describes as “centralized, bureaucratic, top-down anti-poverty programs.” After getting a law degree, I spent over three years working for a local nonprofit legal services program operating in six counties in the Bryan-College Station area. It, too, was created by Lyndon Johnson’s anti-poverty initiative to provide a modicum of civil justice to poor families.

From my personal experience, I know that what Paul Ryan said is an outright lie. He might not have intentionally lied, but he did intentionally parrot the Republican, right-wing position against making America a better, more prosperous country by correcting many of the deficiencies, injustices, and inequities in our economic, social, and legal systems.

Ryan’s opponent in his other political race (he is running also to keep his seat in Congress), Rob Zerban, had this to say about Ryan’s views on anti-poverty programs:

If poverty’s winning the war, it’s because of policies Paul Ryan supports. By doubling down on his radical plot to gut Medicaid, privatize Social Security, and decimate food assistance programs, Paul Ryan is betting against working families — all to hand out new tax breaks for millionaires and Big Oil.

As John Nichols points out,

Paul Ryan has taken a side in the war on poverty. He’s against what works. Ryan has a right to take the positions that he does. But no one should confuse those positions with a sincere commitment to fighting, let alone ending, poverty.

And that about sums up Paul Ryan as a politician and a human being.

Like Ryan and so many cut from his mold, I can tell anecdotes from personal experience about people unmotivated to take advantage of available opportunities, but I can tell far more about people who eagerly made the most of opportunities that were available — about children who received health and dental care as they learned what they needed to prepare for public school; about their parents, who learned how to help their children be more successful in life than they ever imagined was possible; about people with few marketable skills who acquired job skills that lasted a lifetime.

Stories about high school dropouts who obtained their GEDs and went on to colleges or jobs that enriched their lives, not just with money, but with hope made possible by opportunity; about families with renewed pride because they helped to build their own homes; about women whose lives were saved by having access to preventive health care for the first time in their lives; about elderly people who, because of Medicare and Medicaid, avoided the misery their parents experienced in old age.

In the spring of 1969, the local nonprofit agency I worked for received a crudely-written letter addressed only to “Headstart, Washington, D.C.” It had been received at the national offices of the Office of Economic Opportunity (OEO), the agency responsible for the Head Start program at that time. The Washington office sent it to the regional OEO office in Dallas, which forwarded it to my agency. It had been sent by a man who lived with his family of four children and his wife in rural Williamson County, Texas, where we provided services.

The man had heard a public service announcement on the radio promoting Head Start, the pre-school OEO program. His letter stated simply that “he needed a headstart.” While he had not correctly understood the announcement, he had heard that there might be an opportunity for him and his family to get some relief from their misery, and he desperately wanted that opportunity. The director of my agency, Rawleigh Elliott, a former mayor of Georgetown and businessman, asked me to find the family and offer help.

After a bit of searching, a friend and I found the family’s house — a shack with a wood-fired stove, no insulation, and no paint on its weather-worn clapboards. We talked with the family, assessed their needs, and started finding them the help they needed to get their own “headstart.” Such families exist all over this country, even as many politicians dismiss their plight and even their existence.

One such politician is Paul Ryan, who has a deformed and myopic view of life. Ryan has never believed the words of his party’s progenitor Abraham Lincoln, that our government is of, by, and for the people. Many things are wrong in this country, but none of them involve actions by “we, the people” to make everyone’s lives less degrading, less impoverished, and less unjust, with more decency and opportunity for all.

It will be a sad day for America if someone like Ryan is put in charge of our government.