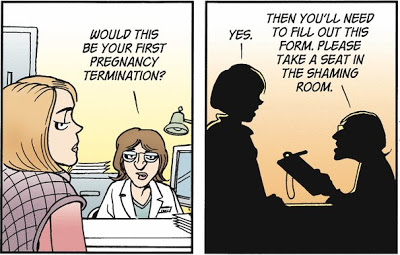 No other right, except for perhaps the right to organize a union, has been under such assault in the U.S.

The abortion-rights deniers have worked tirelessly for 36 years to make abortion uncomfortable, shameful, difficult, painful, and exhausting, if not impossible.

By driving health facilities that provide abortions out of business through regulations and legal hurdles too high to jump over, their work has prevented many women from exercising their right to terminate an unwanted pregnancy. When that didn’t work well enough, they tried murdering a few doctors and health-care providers (seven to date) who provided the medical expertise necessary to accomplish safe abortions.

No other right, except for perhaps the right to organize a union, has been under such assault in the U.S. When the abortion deniers realized that the right to privacy guaranteed to every woman the right to decide not to carry a pregnancy to term, they set about to undermine the right to an abortion in any way possible, including by passing laws that allow doctors to withhold medical information about the condition of the fetus (such as those laws introduced in Arizona and Kansas).

I don’t know a single person who advocates abortion, which is how the abortion-right deniers like to characterize the position of those people who believe that a decision to terminate a pregnancy is one made by each individual based on her own circumstances and health care needs.

I do not advocate abortion, but I do advocate the right of a pregnant woman to make that decision for herself, unencumbered by the religious and moral beliefs of the rest of us, and without being subjected to the authoritarian views of some others.

The abortion-right deniers, on the other hand, have bombed and burned health clinics; they have intimidated women going to clinics for reproductive health services of all sorts (including abortion); they have committed acts of vandalism; they have stalked and assaulted pregnant women; they have tricked pregnant women into not showing up for appointments; they have falsely advertised anti-abortion clinics as family planning clinics; they have made the procedure more expensive for women and their health care providers; they have had abortion doctors prosecuted for performing abortions; and then they hit on the current strategy of legislating against abortion at the state level.

The abortion-right deniers tried laws that delay abortion, like waiting periods, but this was not effective enough. A few years ago, they were satisfied to require women to view a sonogram image of the fetus before having an abortion. Recently, they hit on the idea of requiring an intravaginal ultrasound, an invasive procedure that some have likened to legal rape because it requires by government mandate that a medical instrument be inserted into a woman’s vagina against her will.

The cartoon Doonesbury, written and drawn by Gary Trudeau, has taken on this latest tactic of the abortion-right deniers, satirically depicting a woman seeking to terminate a pregnancy, who is instructed to wait in a “shaming room” where “a middle-aged, male state legislator” will introduce her to the procedure to make sure that she hears the heartbeat of the fetus and sees the body parts that can be identified, or hear them described to her.

Trudeau’s characters call the medical devices “ten-inch shaming wands,” and the doctor performing the procedure says “By the power invested in me by the GOP base, I thee rape.” Trudeau skillfully lampoons the GOP plan to create a “shame spiral” that may cause a pregnant woman to change her mind about having an abortion.

But cartoons are not the only means for taking satirical aim at these absurd, unnecessary, tyrannical, dispiriting, and intrusive laws. Some state legislators have struck back by proposing laws that make having a child a bit more of an equal responsibility for men, and make receiving certain health services used primarily by men just as uncomfortable for them as the intravaginal ultrasounds are for women, who are compelled to endure them to receive what is their right under the Constitution.

Last year, in Texas, Rep. Harold Dutton thought that the man responsible for creating a pregnancy with any woman who changed her mind about seeking an abortion after viewing an ultrasound image of the fetus should have to pay the child’s college tuition. When that proposal failed, he proposed that the father should have to subsidize the child’s health care costs until age 18. When that idea didn’t fly with the legislators, Rep. Dutton lowered the age to six, with the same result.

After Georgia’s house considered a bill banning abortions for women 20 weeks or more pregnant, a female representative proposed a bill prohibiting vasectomies because they leave “thousands of children… deprived of birth.”

A state senator in Ohio thought that special regulations were needed to protect men who sought prescription drugs for impotency. Had her bill passed, such men would have had to submit to psychological screenings. As Sen. Nina Turner explained, “We must advocate for the traditional family and ensure that all men using (impotence drugs) are healthy, stable, and educated about their options — including celibacy as a viable life choice.”

A state representative in Illinois had a different idea about how to educate men seeking Viagra to relieve their impotence. Under the bill, such patients would have had to watch a video showing the alarming treatment for persistent erections — those lasting four hours or more.

Nine female lawmakers in Missouri became concerned about an elective medical procedure available only to men after the legislature voted to reject the President’s contraceptive coverage mandate. They co-sponsored a bill restricting access to vasectomies unless a patient seeking a vasectomy risks death or serious bodily harm without the procedure.

The bill provided that, “In determining whether a vasectomy is necessary, no regard shall be made to the desire of a man to father children, his economic situation, his age, the number of children he is currently responsible for, or any danger to his wife or partner in the event a child is conceived.”

When Oklahoma’s state senate tried to declare zygotes persons to be protected under Oklahoma law, Sen. Constance Johnson introduced an amendment that would have declared ejaculating anywhere except in a woman’s vagina as “an action against an unborn child.” The Senator also suggested the need for a law that would require any man who impregnates a woman without her permission to pay a $25,000 fine, support the child until it reaches the age of 21, and get a vasectomy. She saw this as needed “in the spirit of shared responsibility.”

A colleague proposed a provision that would require the father of a child conceived without permission of the mother to be financially responsible for the mother’s health care, housing, transportation, and nourishment during the pregnancy.

There is little doubt that these proposals were as intentionally and equally ridiculous as the ideas that gave rise to them — ideas that would have subjected pregnant women to unconscionable requirements intended only to interfere in the exercise of their constitutional right to terminate an unwanted pregnancy no matter what the circumstances.

As the Daily Koz put it, discussing changes in Arizona’s laws about women seeking a full range of health care services:

Arizona is the latest state to decide that womenfolk need closer supervision when it comes to their own health choices; they’re even upping the ante by proposing that individual employers ought to be able to monitor the ostensible morality of women employees themselves. That’s, um, nuts.

To understand the cruelty of the requirements of government interference with the decision to terminate a pregnancy, read this account in the March 15, 2012, Texas Observer. Carolyn Jones explains her situation and what Texas’ new sonogram law meant for her:

Halfway through my pregnancy, I learned that my baby was ill. Profoundly so. My doctor gave us the news kindly, but still, my husband and I weren’t prepared. Just a few minutes earlier, we’d been smiling giddily at fellow expectant parents as we waited for the doctor to see us. In a sonography room smelling faintly of lemongrass, I’d just had gel rubbed on my stomach, just seen blots on the screen become tiny hands. For a brief, exultant moment, we’d seen our son — a brother for our 2-year-old girl.

Yet now my doctor was looking grim and, with chair pulled close, was speaking of alarming things… My husband looked angry, and maybe I did too, but it was astonishment more than anger. Ours was a profound disbelief that something so bad might happen to people who think themselves charmed. We already had one healthy child and had expected good fortune to give us two.

Instead, before I’d even known I was pregnant, a molecular flaw had determined that our son’s brain, spine and legs wouldn’t develop correctly. If he were to make it to something our doctor couldn’t guarantee — he’d need a lifetime of medical care. From the moment he was born, my doctor told us, our son would suffer greatly.

…It felt like a physical blow to hear that word, abortion, in the context of our much-wanted child. Abortion is a topic that never seemed relevant to me; it was something we read about in the news or talked about politically; it always remained at a safe distance. Yet now its ugly fist was hammering on my chest…

[T]he young woman… told me reluctantly about the new Texas sonogram law that had just come into effect. I’d already heard about it. The law passed last spring but had been suppressed by legal injunction until two weeks earlier.

My counselor said that the law required me to have another ultrasound that day, and that I was legally obligated to hear a doctor describe my baby. I’d then have to wait 24 hours before coming back for the procedure. She said that I could either see the sonogram or listen to the baby’s heartbeat, adding weakly that this choice was mine.

“I don’t want to have to do this at all,” I told her. “I’m doing this to prevent my baby’s suffering. I don’t want another sonogram when I’ve already had two today. I don’t want to hear a description of the life I’m about to end. Please,” I said, “I can’t take any more pain.”

I confess that I don’t know why I said that. I knew it was a fait accompli. The counselor could no more change the government requirement than I could. Yet here was a superfluous layer of torment piled upon an already horrific day, and I wanted this woman to know it…

What good is a law that adds only pain and difficulty to perhaps the most painful and difficult decision a woman can make? Shouldn’t women have a right to protect themselves from strangers’ opinions on their most personal matters? Shouldn’t we have the right not to know?

Sometimes satire is the only weapon available in the face of unremitting cruelty offered by people who have no respect for a woman’s health, or her ability to make an intelligent and informed decision about her health and her body without government interference. Perhaps the explanation for the cruelty is even more basic. Maybe these people have no respect for women.