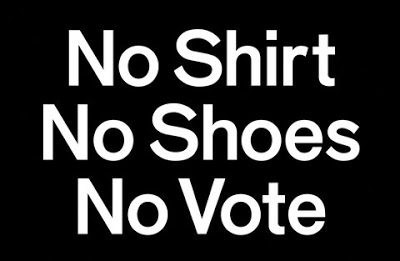 Registering the poor to vote ‘is like handing out burglary tools to criminals.’ — Conservative columnist Matthew Vadum

It was a moving moment when Rep. John Lewis (D-GA) learned that his great-great-grandfather, Tobias Carter, a slave until 1865, had registered to vote for the first time in 1867. Ninety-eight years later, the civil rights activist and ally of Martin Luther King, Jr., had celebrated the passage of the Voting Rights Act after a long struggle, not knowing that nearly 100 years earlier one of his ancestors had been allowed to register and vote without opposition or intimidation.

But in less than 10 years from that act of freedom, African-Americans throughout the South had largely lost the ability to vote because of Jim Crow laws and acts of intimidation and violence, including murder, inflicted on them by white supremacists.

John Lewis was a guest recently on Henry Louis Gates, Jr.‘s PBS program Finding Your Roots. Gates delves into the personal history of his guests, usually public personalities, to find how their forebears came to this country, who their ancestors were, what happened to them, and what their DNA shows about their origins.

It took a few moments for the information Gates gave John Lewis to sink in. Then, Lewis seemed to recognize the irony that nearly 100 years after his great-great-grandfather registered to vote, the nation would have to reinstate that right for African-Americans. Lewis tried to hold back his tears, but he could not.

In the last three decades of the 1800s, until the Voting Rights Act of 1965, it was mostly Democrats in the South who suppressed voting by minorities. That began to change during the presidency of Franklin Roosevelt as Democrats over a period of 25 years became more and more identified with the movement for civil rights for all Americans, and became a minority party throughout the South.

Republicans in the North worked to suppress voting, too — mostly to prevent immigrants, blue-collar workers, and the poor from voting — with tricky procedural rules, such as requiring voters to cancel their registration after moving before being allowed to re-register, or commanding some voters to have authenticated naturalization papers with them at the polls.

Now, throughout the country it is the Republican party that systematically devises ways, old and new, to reduce registration and suppress voting by people they deem unlikely to support Republican causes: minorities, elderly people, and college students. The virtual Tea Party takeover of the Republican Party during the past two years has provided a new impetus for Republican voter suppression.

I remember learning about voter suppression first in 1971, during the nomination hearings into the appointment of William Rehnquist to the U. S. Supreme Court. In the 1964 elections, Rehnquist served as a Republican poll watcher whose job was to delay every minority voter that he could based on the supposition that they would vote Democratic.

He knew the law and applied it with the precision of a swordsman. He sat at the table at the Bethune School, a polling place brimming with black citizens, and quizzed voters ad nauseam about where they were from, how long they’d lived there — every question in the book. A passage of the Constitution was read and people who spoke broken English were ordered to interpret it to prove they had the language skills to vote.

Rehnquist succeeded in holding up a line four abreast and a block long before Democratic poll watchers arrived at the polling station in Phoenix. The voter suppression was so well organized that it had a name — “Operation Eagle Eye.”

While the suppression effort was legal at the time, it was nothing but bullying of the less well-educated by the elite. The voter suppression efforts of Rehnquist were described by several people, including Lito Pena, who went on to serve for 30 years in the Arizona Legislature, and by a person who later became a deputy U. S. Attorney, as well as several others. But Rehnquist’s efforts were minor compared to what has been happening recently.

The mostly Republican modern voter suppression efforts include requiring photo identification in order to register, reducing the time allowed for early voting, ending same-day registration where that has been available (in Texas, voter registration ends 30 days before the election), creating greater difficulties for eligible ex-felons who have paid for their crimes, requiring proof-of-citizenship documents in order to register, and discouraging voter registration drives through new regulations that penalize authorized registrars who can’t immediately file registration forms.

The imaginary “arc of justice” that many orators like to talk about has seemed to be moving toward greater inclusion when the whole of American history is considered. Women achieved the right to vote only during my mother’s lifetime, poll taxes were eliminated, literacy tests were overturned, English-language proficiency tests were abolished, and property ownership was invalidated as a requirement for voting.

But none of these notable expansions of the voting franchise have been absolute. There have been periods of progress followed by retrenchment. Thankfully, we have had mostly progress for women and, since 1965, for minorities and the poor, at least until recently.

Both major political parties have been guilty of voter suppression at various times in our history. What is unusual in recent history is that nearly all voter suppression is tied to the Republican Party and has been aimed at systematically disenfranchising people who are believed to favor the other major party. When this is done by passing laws, the justification given is that the laws are needed to prevent voter fraud — an unsupportable canard.

A favorite new voter law is to require state-issued photo IDs. Twenty states either have photo-ID law requirements for voter registration or are considering them. Low-income people and students have disproportionately fewer state-issued photo IDs. Students may have IDs issued by their colleges, but these are not acceptable under some of the new photo-ID registration laws. Many low-income people do not have checking accounts and don’t drive, so their need for photo IDs are limited.

They live in a cash-only economy. Requiring them to obtain a state-issued ID just to be allowed to register to vote is a step most of us don’t have to worry about, but they do.

Obtaining photo IDs is not simple or cheap for many people. They need to get to the office that issues the IDs and then produce a variety of documents, such as a birth certificate, passport, marriage license, court record, or similar documents. If they don’t have such documents readily available, they will have to obtain them, which takes time — often several weeks.

All of these documents cost money — anywhere from $10 to $200 — not insignificant amounts for someone living on a limited income — such as $600 a month. In addition, the photo ID will cost from $10 to $30 in those states that require them for voter registration. This requirement sounds a lot like the notorious poll tax used to keep poor African-Americans from voting before 1965.

The nonpartisan League of Women Voters used to conduct voter registration drives, but new laws and regulations in Texas and Florida have made all such efforts difficult and risky. The laws impose tight schedules to turn in new registrations and significant fines if deadlines (such as within 48 hours of gathering voter registration information) are not met.

In the past year, same-day registration has been attacked by Republicans in two states, five states have reduced the length of early voting, executive orders in two states have revoked the right of ex-felons to vote, and three states have reduced the hours that state photo-ID offices are open or have closed some of the offices, making it more difficult to obtain the photo ID. In Texas, 34 counties do not have an office that issues photo IDs. Four of these counties have Hispanic populations over 75%.

If you think that changes to voting laws is just a happenstance, consider that in 2009 the American Legislative Exchange Council (ALEC) issued a model Voter ID law that prohibited certain forms of identification, such as student IDs. This model law has been acknowledged by Tea Party organizations and legislators (mostly Republican) as the source of their inspiration to make voter registration and voting more difficult.

But Republicans don’t rely only on changing the laws to suppress voting. Florida’s Republican governor has ordered a purge of voter registration lists, much like what happened before the 2000 election that was contested all the way to the Supreme Court. In some places, voters are misled by mailings and circulars about when elections take place. In others, information distributed about voting locations is falsified.

In some minority communities, prospective voters have been intimidated by warnings that false voting will be prosecuted. And then there is the wide-spread use of systematic voter challenges by Tea Partiers in Wisconsin in 2010. Such efforts to disenfranchise voters, embarrass them, and intimidate them should be criminal, but the claim that changing laws is justified because of widespread voter fraud is merely false.

In a 2007 report on voter fraud, the Brennan Center concluded: “The type of individual voter fraud supposedly targeted by recent legislative efforts — especially efforts to require certain forms of voter ID — simply does not exist.” For five years during the George W. Bush presidency, the Justice Department conducted a “war on voter fraud,” which resulted in 86 convictions out of more than 196,000,000 votes cast.

This result was not unexpected. It is absurd to believe that there is a systematic effort by large numbers of people to cast a vote as another person. Such projects would be an enormous waste of time, yield few results, be easy to detect, and are adequately controlled by existing criminal laws with harsh penalties.

It is difficult to believe that the Republican effort at disenfranchisement results from anything other than ideology. Leading Republican supporters have acknowledged their disdain for all Americans to be allowed to vote.

Conservative columnist Matthew Vadum believes that registering the poor to vote “is like handing out burglary tools to criminals.” Heritage Foundation co-founder Paul Weyrich is even more blunt: “I don’t want everybody to vote.” And in the 2008 presidential election, 3 million Americans who tried to vote could not do so because of voter registration requirements. Vadum and Weyrich must be pleased.

Both major political parties have been guilty in the past of rejecting democratic values in order to give their party’s candidates an advantage. Now the right to vote is under attack mainly by Republicans who reject democratic values. They want to discard the right that John Lewis has fought for all of his life and that Lyndon B. Johnson called “the basic right, without which all others are meaningless.”