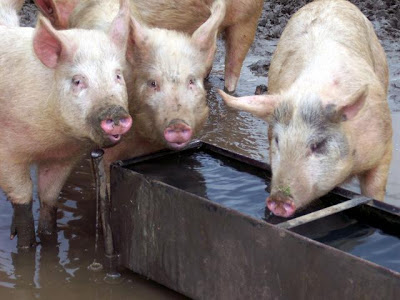 At the trough. Image from Florida Pundit.

The average current tax cut on millionaires insisted on by the Republicans and agreed to by President Obama amounts to $200,000 each for 2011 and 2012.

A family with salaried income of $50,000 a year will have nearly $1,000 extra to spend on whatever they need. This is a modest way to give average working Americans a few dollars, almost all of which will be spent on goods and services, thus stimulating the economy and leading to a demand for more workers to provide those goods and services.

Republicans, however, see the benefit in extending tax cuts only for the millionaires and billionaires, who will invest their money wherever it will bring them the greatest yield. They already spend all that they want or need to spend.

Their tax reduction doesn’t create jobs because it isn’t invested in job-producing activity. It goes to buy stocks or bonds in companies all over the globe, or to increasing real estate holdings, not to creating new companies that will hire new employees, or to adding jobs to companies they may already own. But most Republicans oppose Obama’s modest payroll tax cut for average Americans.

I have been critical of President Obama’s economic policies since he took office, beginning with his appointments to key positions related to the economy. Most notable among these was Larry Summers, who served as Treasury Secretary for two years during the Bill Clinton presidency. In that position, he pushed for the Commodity Futures Modernization Act, which allowed many investment vehicles, such as derivatives, to go unregulated. Derivatives include credit default swaps that led in large part to the 2008 economic crisis.

Summers was and is a true believer in a largely unregulated financial market. When we fail to regulate those markets adequately, the financial sector focuses on ways to make money for investment banks through methods that do nothing to create jobs or stimulate the economy.

Business Week also reported other corruption in this process, including widespread bribery or payoffs to obtain mortgage applications, as well as fabricated loan documents, along with the coaching of mortgage brokers about how to skirt the few regulations that did exist.

In the end, the wholesalers were undone by the same people who allowed for their rise: their Wall Street overlords. During the boom investment banks bought as many loans as they could to pool together and turn into securities. In 2006 the top 10 investment banks, which included Merrill Lynch, … Bear Stearns,… and Lehman Brothers, sold mortgage-backed securities worth $1.5 trillion, up from $245 billion in 2000.

To keep the supply of loans coming, the investment banks increasingly took control of the industry’s frontline players as well. First they started buying small, independent wholesaling firms. Next they extended billions in credit to subprime lenders. Then they took stakes in some, and bought others outright. At the height of the frenzy in 2006, six top investment banks shelled out a total of $2.2 billion to buy subprime shops.

This kind of activity doesn’t create jobs, it destroys jobs, as thousands of jobs were cut when the housing bubble burst in 2008. When the wealthy look for places to invest their money, they don’t typically look for entrepreneurial ventures that will create jobs, but for ways to safely invest their excess money, money they don’t need for what most of us consider the necessities of life.

Of course, the rating agencies, like Standard & Poor’s (who recently downgraded the ratings of U.S. government bonds), gave the best ratings to these mortgage consolidation investments, leading wealthy investors to believe that such investments were a great way to make more money. The investment bankers, you may remember, were bailed out by the taxpayers at the end of the Bush presidency and during the early part of Obama’s presidency.

The Bush tax cuts on millionaires and billionaires caused $2 trillion in deficits during the Bush presidency. The average current tax cut on millionaires insisted on by the Republicans and agreed to by President Obama amounts to $200,000 each for 2011 and 2012. The wars started by Bush and continued by Obama, along with the tax cuts for the wealthy, will account for half the public debt by 2019, according to the nonpartisan, nonprofit Center for Budget and Policy Priorities.

At least the President is trying to make a modest correction in his grievous tax agreement with the Republicans, but there will be few Republicans who will agree to very modest tax relief for working Americans because they have cast their lot with the wealthiest 1% of Americans, who became wealthy because they figured out how to game the political and economic system for their benefit and to the detriment of the other 99%.

Over 200 years ago, Thomas Jefferson wrote:

I hope we shall crush in its birth the aristocracy of our monied corporations, which dare already to challenge our government to a trial by strength, and bid defiance to the laws of our country.

When will the President learn that it is not possible to make deals with hypocrites who are, by their nature, deceivers and charlatans? Thomas Jefferson understood the nature of uncontrolled capitalism, but we did not heed his warning. It becomes more difficult by the day to make a persuasive argument that the oligarchy is not in charge of our government, from top to bottom.