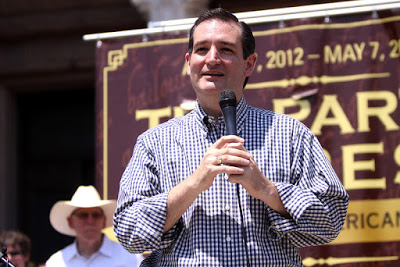 Like many right-wingers, Cruz has a limited understanding of our First Amendment rights.

Ted Cruz, the Republican candidate for the U.S. Senate from Texas, presents himself as a champion of personal liberty, but he is far from that. Based on what he writes on his own campaign website, Cruz is a proponent of restricting liberty in vast areas of our lives.

Cruz opposes the right of women to make their own medical decisions in consultation with their physicians. Like many other right-wingers, Cruz does not believe a woman should have control over her reproductive processes. He believes that the government knows best what a woman should do about unwanted pregnancies. To Cruz, a woman’s reproductive system is mainly the purview of the state. Apparently, this extends even to the decision to use birth control.

It is politically convenient to side with the majority on religious issues, even if that means that the majority’s religious beliefs are, with the help of the government, crammed down the throats of those who believe differently.

I admit that I have a vested interest in the drug benefit, since I receive Medicare benefits, including those for prescription drugs. Cruz would take from me the financial security that Medicare and all of its benefits provide. Without Medicare, my life would be more limited and its length undoubtedly shortened. The evidence shows that many, if not most, seniors are in the same situation I am in.

When Ted Cruz discusses voting, he apparently does not connect it to liberty. Instead, Cruz believes that voter fraud is a serious problem, though he is unable to find evidence for any significant voter fraud — just like everyone else who has studied the data. That hasn’t stopped him from supporting laws and regulations that make it difficult for seniors and low-income citizens to vote.

No one who claims to believe in democracy can justify regulations that suppress voting, but Cruz is in favor of taking away from thousands of Texans this seminal freedom, without which we will have little, if any, liberty. The voter suppression Cruz favors most seems to be voter ID laws that require a state-issued ID to register and vote. In Texas, 34 counties do not have a state office that issues photo IDs. Four of these counties have Hispanic populations over 75%. Cruz has not protected the liberty interests of these citizens.

In a 2007 report on voter fraud, the Brennan Center concluded: “The type of individual voter fraud supposedly targeted by recent legislative efforts — especially efforts to require certain forms of voter ID — simply does not exist.”

For five years during the George W. Bush presidency, the Justice Department conducted a “war on voter fraud,” which resulted in 86 convictions out of more than 196,000,000 votes cast. This result was not unexpected. It is absurd to believe that there is a systematic effort by large numbers of people to cast a vote as another person.

Such projects would be an enormous waste of time, yield few results, be easy to detect, and are adequately controlled by existing criminal laws with harsh penalties. But Ted Cruz cares so little about the liberty of all Texas citizens that he wants to keep them from voting with such voter suppression laws and regulations.

Cruz’s campaign website claims that he has played an important “role in the fight against infringement of private property rights,” including those arising from the use of eminent domain by government or allowed by government.

But where has Cruz been in the fight against the abuse of eminent domain allowed by Texas law for such companies as TransCanada, which is trying to take the land of Texas citizens to build a pipeline to transport tar sands oil to be refined at two Texas refineries and sold overseas to increase their profits? This pipeline will not lower any Texan’s gasoline bill or provide any long-term jobs that will benefit Texans, but Cruz has not stood up for the liberty interests of Texas landowners to protect and preserve their land.

For Cruz and many right-wingers, same-sex marriage is not seen as a matter of personal liberty. Cruz thinks he and the government have the right to tell citizens whom they can love and marry. In fact, he is proud to deny citizens the right to choose the mate of their choice unless that mate is someone of the opposite sex.

No liberty interest is more personal than the right to choose with whom to live, love, and marry, yet Cruz places his personal religious beliefs and preferences over the liberty interests of the entire gay population. To deny anyone such a basic liberty grounded in religious belief means that other liberties can be denied also for religious reasons. Cruz’s position is antithetical to the Constitution and basic morality — and personal liberty.

Like many right-wingers, Cruz has a limited understanding of our First Amendment rights. To his credit, Cruz opposes “groups that spout hatred and bigotry,” but to Cruz this means that such groups cannot participate in civic projects of benefit to all.

While I have opposed the Ku Klux Klan longer than Cruz has been alive, it violates the constitutional rights of association and free speech to deny that backward group the right to pick up litter along the highways as part of a government-sponsored program, which is an action that Cruz is proud to have pursued.

Cruz may think he supports the liberty interests of all of our citizens, but he is mistaken. He is an extreme right-wing ideologue, selected by the Republican Party of Texas, mainly through the efforts of Tea Party zealots and their rich friends, to go to Washington to destroy the social safety net that protects all our citizens from lives of misery and poverty.

He has spent his brief career in the service of corporations and the wealthiest 1% of Americans — the plutocracy that is very near to complete control of our political and economic systems.

Texans have risen up in the past to oppose injustice and fight for liberty. Electing politicians like Ted Cruz is a step in the wrong direction. It is the direction that will ensure that we will all have less liberty and more government control over our lives.